Is there a performance penalty by using dual cards in a camera?

I've recently upgraded to a camera that has dual cards and plan to make use of it by mirroring to both cards.

As the camera theoretically has to make the double amount of writes, is there a performance impact? (especially whilst shooting RAW continuous and filling the buffer). At the same time if one card is faster than the other does it wait until the image has been written to both cards before releasing the space in the buffer?

(Camera is 5D4, although I do wonder if there's a difference between the manufacturers)

Usually, the output buffer is the same for both slots, even if they support different media (e.g. Compact Flash vs. Secure Digital). That means that for 2 media that are of the exact same speed (and if both slots support that), there is almost1 no performance difference between using 2 vs. only 1 card.

1 There might be some difference if the card bus speed is too low - that might come down to parallelisation issues and/or the controller's speed.

However, because of that I/O-design, the camera has to wait for the slowest medium to finish so it can clear the buffer - meaning that if your card A has a lower max. speed than your card 1 (or vice versa), the speed will fall back to that of the slowest medium, which means that performance will suffer.

For this, it is also necessary to remember that the maximum achievable speed is not necessarily the max. speed printed on the card:

How many consecutive, high-burst shots until the buffer is filled:

Unfortunately, I do not have any other (slower) CF-card, so I cannot test it the other way round.

Note that the EOS 5D Mark III does not support UHS-protocols in SD-cards.

All stated above only holds true for using the same quality settings for both cards. If you use a mixed setting, then performance could, in theory, be degraded since more DSP work is needed. Though as long as you write the larger file to the faster card, you should not notice this "DSP-lag".

Also, since camera manufacturers usually do not offer schematics of the process, all of my statements above should be seen as very simplified working theory. Not all manufacturers might do this in the same way.

As the camera theoretically has to make the double amount of writes, is there a performance impact? (especially whilst shooting RAW continuous and filling the buffer).

There almost always is a performance penalty. How significant it is can vary widely from one camera model to the next. The only exception would be if both slots support the same type of card, there are more-or-less identical cards (same brand, model, batch, and current amount of consecutive free space) in both slots, and the same exact files are being written to both cards simultaneously.

At the same time if one card is faster than the other does it wait until the image has been written to both cards before releasing the space in the buffer?

Yes, the space in the buffer will not be released until both files have been written.

Camera is 5D4, although I do wonder if there's a difference between the manufacturers?

Another way of looking at it, which CameraMemorySPeed.com also tested, is that the 5D Mark IV can write the following number of (RAW+JPEG/RAW/JPEG) images to the fastest memory cards of each type, used alone, in 30 seconds:

This difference is much less dramatic than the 5D Mark III, which is UDMA-7 compliant but not UHS-I compliant, but there is still a significant difference.¹

Canon has been roundly criticized for the SD card slot not supporting UHS-I in many of their upper tier cameras that also included much faster CF card busses, even though UHS-I has been out for a while. If an SD card is used in a dual slot configuration, it also slows down the CF slot. Several of their other cameras with only a single SD slot and no CF slot, some of them older than the dual CF/SD card models that don't support UHS-I, do support UHS-I. Canon currently offers no ILC models that support UHS-II speeds. As of July 2018, a handful of cameras from other manufacturers do support USH-II speeds, but only five of the ten with dual card slots support UHS-II speeds in both slots.

Gavin Farrington did a detailed look at how the same two cards fared in the Canon EOS 5D Mark III with various save options selected. 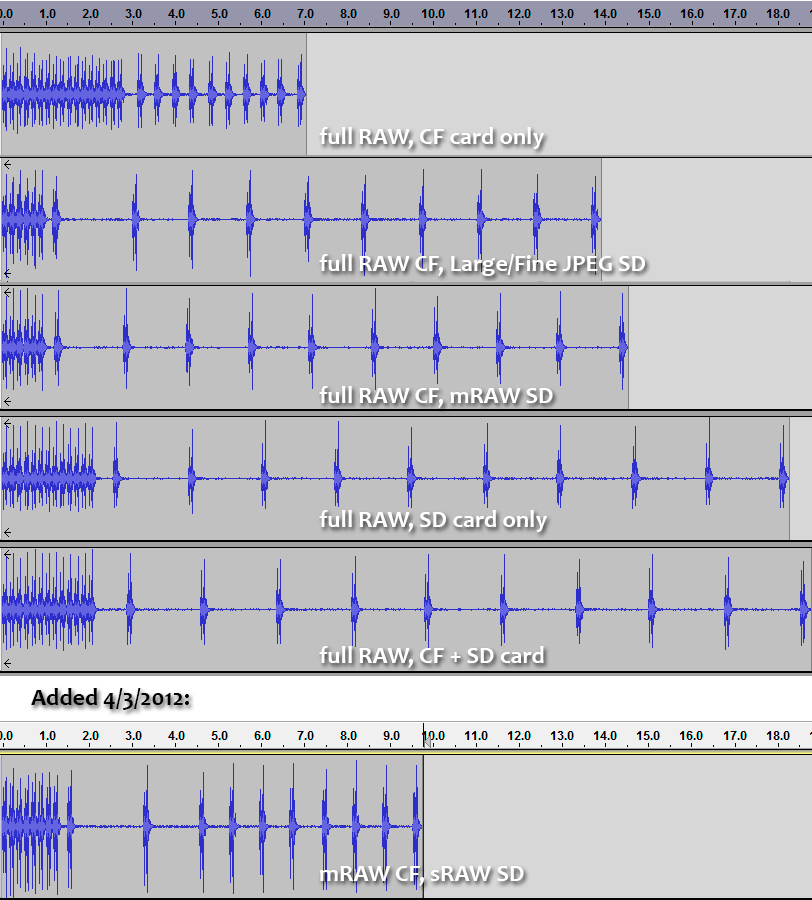 Not the answer you're looking for? Browse other questions tagged memory-card performance or ask your own question.

1
Will I benefit from using very fast (> 30 MB/s) SD cards in a non-UHS enabled camera?
11
Are there any memory cards available which can keep up with the Canon 1d x?
0
How many keywords are possible in Lightroom without a performance penalty?
6
Can a regular SATA SSD be used with a camera taking CFast cards?
1
Is Mirroring on one card is done through camera or through cards?
5
Can a firmware upgrade enable a camera to use SDXC memory cards?
2
Increasing Lightroom performance when using spot removal brush
0
What memory card should I get for continuous shooting for my Nikon D850?
6
Why is my Nikon camera writing non-identical files in Dual Cards Backup Mode?