I'm a Samyang 14mm f/2.8 owner, totally manual lens, and I never used that kind of lens. I love to do concert photography shots and I always used my tele or mid-tele lens. I'd want to try to use that Samyang lens for some "artistic" shots, as I saw in lot of good photographers websites. How can I manage manual focus to bring some good shot at home? Is it good to use hyperfocal rule? Is there someone who shoot at concerts with a similar lens? Thanks in advance, Angelo

I very occasionally use a 17-40mm (autofocus) lens with a FF camera at concerts, but the wide end is usually for turning around and getting shots of the crowd just on the other side of the barrier keeping them out of the media pit, so the closest ones are only 2-3 feet away.

Normally you could use "zone" focus techniques for wide angle shots with a manual focus lens, like you would in street photography. If it's an outdoor daytime concert you can. But if you're shooting inside or at night, it's tough to shoot at f/8 or f/11 and preserve any usable shutter values and usable ISO values.

I mean outdoor at night, generally 4-5 meters from the stage. I live in a small city and concerts here are very "friendly", with seats far not much than 5mt from the stage, generally.

It's very tough to shoot good wide angle shots from a fixed position, such as sitting in a seat. Effective use of wide angle lenses, particularly very wide angle lenses such as 14mm on a full frame body, depends heavily on the ability to precisely position the camera in a particular spot. If you're not able to move around, that makes it all the more difficult as your positioning options are seriously reduced.

Five meters or more between your position and the performer who is your subject also makes getting effective compositions with a field of view as wide as 14mm on FF pretty tough. It's hard to know exactly what you are going for, but usually you need to be right at the edge of the stage with the performer very close in front of you. Even if you are trying to get a wide shot of an entire group, you usually need something in the foreground to achor the composition or the photo winds up looking like a boring snapshot taken with very little thought.

There are some very good examples of very wide angle concert shots sprinkled throughout this Todd Owyoung review of the Nikon 14-24mm f/2.8. In most of them he is probably less than 1-1.5 meters from the nearest part of his subject.

Maybe the "friendly" nature of your hometown concerts will allow you to move away from your seat a bit and approach closer to the stage to get a few shots at various points during the show?

If you don't trust the focus scale on your lens, you can always pre-focus the lens to the desired distance using magnified Live View and use gaffers tape, which leaves no sticky residue, to fix it there. Another option is to use a rubber band style wrist bracelet or even a purpose made 'Lensband'. One is pictured below on the zoom ring to eliminate zoom creep, but they work just as well to hold a focus ring in place. 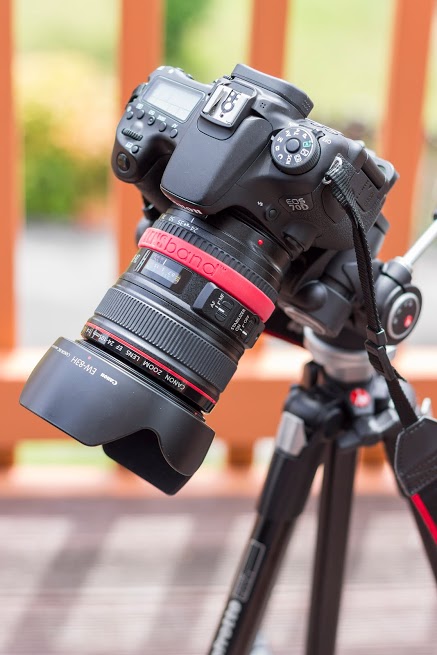 How well you can use a manual focus wide-angle lens really depends on what type of 'concert' you are shooting. There's a lot of difference between a daytime outdoor festival, a theatrically lit arena style show, and a dimly lit nightclub with crappy LED stage lighting. There's also a big difference between shooting from onstage, side stage/backstage, in a media pit, from the front row, in the middle of the crowd, etc.

Scale focus. Why I use a manual wide really, scale focus works when conditions are too fast/rough for autofocus to be practical.

Check the accuracy of your scale beforehand! Both my Rokinon 14 and my adapted Leica 19 are considerably off. So instead of putting the desired distance over the central mark I put it over the right f4 mark on the Leica.

Also check performance at various distances--my Rokinon was horrible past about 10 ft no matter what settings I used.

Practice estimating distances, practice getting a feel for how much DoF/margin for error a given combination of distance and f-stoo gives you. http://www.dofmaster.com/dofjs.html

I seldom do this for photo-pit shows, but for no-barricade punk in a small club it's amazing, especially with off-camera flash. (Tartar Control, Leica 19/2.8, Canon 6d, flash in left hand)

Not the answer you're looking for? Browse other questions tagged samyang concert hyperfocal-distance or ask your own question.