Is there any adapter to mount older Canon EF lenses on a newer Nikon DSLR? [duplicate]

Before the question, here’s some background story: My uncle just brought me his old Canon EOS 100 that he cannot use anymore because there is nowhere where he can develop photos. I am not going to use that old camera for many reasons.

No there are not. The reason is simple mechanics.

Lenses are designed to be attached to the camera at a specific distance. If that distance is increased most lenses can focus more closely than before at the expense of not being able to focus as far in the distance. In other words, it has the same effect as adding an extension tube to the lens with its native mount. Placing a lens made for 44mm registration distance at 46.5mm from the sensor reduces its maximum focusing distance to only a few feet.

Adapting a Canon lens to a Nikon mount without adding additional optics that changes the overall optical formula of the lens would mean you couldn't focus any further than a few feet in front of the camera. Since the throat diameter of the Canon EF mount is 10mm wider than the Nikon F mount, you can't make an adapter that recesses the Canon's 54mm wide lens flange 2.5mm inside the 44mm wide throat of the Nikon F camera.

If one adds additional optical elements to an adapter one can make infinity focus possible, but one also increases the overall magnification. This is essentially what a teleconverter does. Not only does it narrow the angle of view, but it also makes the lens' maximum f-number higher (slower), since the size of the entrance pupil (effective aperture) remains the same but the effective focal length is increased.

Such an item would be considered an adapter/teleconverter, rather than a simple adapter.

What would I be able to do using that adapter? It’s ok to me going full manual, the only important thing is that I could somehow be able to take photos. I’m not into technical things, as I just approached photography, but this would be a good reason to start learning manual settings. For what I can see from the picture of the product it doesn’t have any electrical contacts, so I will only be able to control zoom and focus using the lenses’ rings, right? Will I be able to take a photo with an acceptable quality?

"...will I be able to take a photo with an acceptable quality?"

Since there is only a 2.5mm difference in the respective registration distances there really isn't enough room to use additional optics to create a teleconverter/adapter without making the adapter even longer (and more magnifying and slower with regard to maximum aperture). Even if you could, you probably wouldn't want to. Cheap teleconverters use cheap glass and degrade image quality. Even very high quality teleconverters magnify the flaws of the lens attached to them.

Beyond the mechanics of the optics, Canon uses an all electrical connection between the camera and lens to communicate aperture and autofocus information. Most Nikon cameras use a mechanical-only connection to control aperture. Even though your Nikon D3400 does use an electrical communication for controlling aperture with a few new 'E' lenses (that only work with a few newer Nikon F mount cameras), an adapter would need to "translate" the aperture and AF commands from "Nikon" protocol to "Canon" protocol.

In the case of the EF 28-80mm f/3.5-5.6 and EF 100-300mm f/4.5-5.6 you're looking at older lenses with film era designs, when lens sharpness was not as much a factor as in the current high megapixel digital environment. You're also looking at lenses with maximum apertures that are already close to the threshold of the maximum f-number at which most digital cameras can autofocus. Slowing such a lens down even a little bit would likely mean losing AF, even if one had successfully managed to translate Nikon AF communication from the body to Canon AF communication for the lens (and then translated the Canon lens' response back into "Nikon" for the camera body).

Film that has been stored wound up in a canister doesn't lay near as flat in most 35mm cameras as digital sensors, which are pretty much perfectly flat. With color film, the three dye layers are also at three slightly different depths. We didn't tend to look at most of the images from 35mm film cameras larger than 4x6 prints and rarely looked at them larger than 8x10. With digital images we "pixel peep" tham at 100%: a 24MP image zoomed in at 100% on a 23" HD (1920x1080) monitor is the equivalent of looking at a part of a 60x40 inch print!

No one makes such an adapter that even attempts to control the lens' aperture, and I doubt anyone ever will. If they did, it would likely cost several times what a Nikon lens that is the optical equivalent of a Canon EF 28-80mm f/3.5-5.6 or EF 100-300mm f/4.5-5.6 would cost. You'd still almost certainly be required to focus manually.

On the other hand, you can pick up some fairly good used Canon EOS digital cameras which are 100% compatible with those lenses for a very modest price.

In the U.S., used Canon bodies such as a Rebel T3i or an older semi-professional model such as the 50D can be had from reputable sellers for $200-300. Used 60D bodies are currently going for around $400. Canon USA is currently selling refurbished Rebel T6/1300D bodies with an EF 18-55mm f/3.5-5.6 IS II lens for $269. (I've bought a refurb body and several refurb lenses directly from Canon USA and they all have been in "like new" condition when I received them.)

¹ "focus-by-wire" means there is no direct link between the manual focus ring and the lens' focus mechanism. Rather, the focus ring transmits a set of electronic instructions to the camera body which in turn sends electronic instructions to the lens to move the focus elements using the same motor as when the camera is focusing the lens automatically.

If such an adapter exists (and it probably does) you will lose infinity focus due to the canon eos mount having a smaller flange focual distance. You will also most likelly loose autofucus and aparture control (lens will stay at full open).

On the other had this is the same lens type still used on canon DSLRs today so if buying a cheap used canon body (can be found for as little as 40$ for older models) that might be an option.

As Michael C and lijat have already stated, you will get much better use out of those lenses if you buy a cheap Canon DSLR to use them with. However, I did find what appears to be a Canon EOS EF Mount Lens to Nikon F Mount Adapter. (On an auction site; apparently the same adapter lijat found.)

You should consider that the optical element has 1.41x magnification, will likely degrade image quality, and infinity focus may not work perfectly. Also, everything that requires electricity will simply not work. You will lose aperture control, auto-focus, and whatever other features made the lenses appealing in the first place.

As Agent_L has noted, "Using an adapter most of the time is masochism." 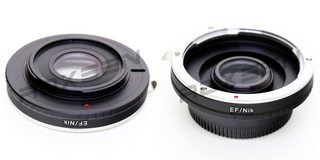 Not the answer you're looking for? Browse other questions tagged lens canon lens-adapter nikon-d3400 or ask your own question.

26
Can I use lens brand X on interchangeable lens camera brand Y?
14
How to know you've outgrown your equipment?
13
What is Nano USM and how does it compare to an STM or USM lens?
0
Does a Ring-Ultrasonic EF-S lens require power to manually focus? (using with adapter)

9
Which lenses are best for macro and for birdwatching (both Canon and Nikon)?
8
long range canon lenses
4
Which Canon lens combination should I buy for landscape photography?
3
Can the EF lenses of a Canon EOS film camera be used on an APS-C digital EOS camera?
2
How would Yashica M lenses compare with modern Canon lenses in terms of image quality?
3
Will my old Canon Digital Rebel lenses work on a 7DMkII?
2
What should I expect from Canon EF 24-70mm f/2.8L II USM?