I am about to publish a book and after uplaod the contents, I was notified various errors esp about the images that were less than 300 DPI (115 dpi, 150 dpi, 200 dpi). I was told that they can can accept only 300 DPI pics as it is the best for printing.

Now first my images weren't really of that quality as they are simply images of scan documents but I tried to comply and used image size feature in photoshop to increase dpi to 300, but that made size of the images too big (like 40 MB one image). Am I suppose to resize dimension than after changing DPI?

My question is If i change DPI to 300 and leave everything else same, the file size is going to be huge. What is the recommended setting of the image dimension for printout on A4 paper and does by increasing DPI, the print quality is going to be affected? Because I print the same content on my home printer and they come absolutely fine.

Using Photoshop CC Image > Image Size.. Dialog. Not I only changed DPI from 72 to 300, pics dimension increase to 400px while size shoots to 34MB. So should I then reduce the pixel size next to reduce size? 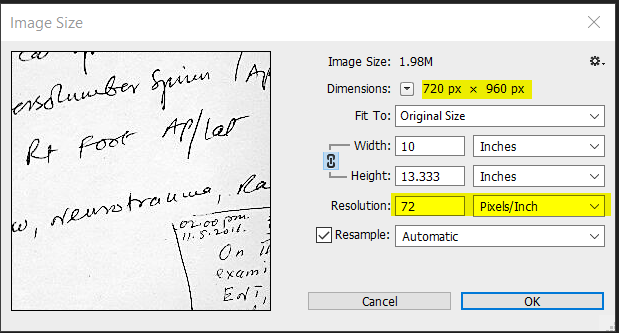 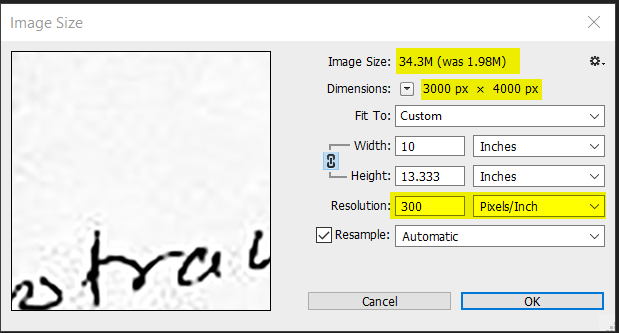 (Just for the record, the value listed in the EXIF standard as 'dpi', or "dots per inch," is really ppi, or "pixels per inch." For more please see How do I generate high quality prints with an ink jet printer?)

My guess would be that you are re-rendering a fairly compressed jpeg and then saving it at a much higher quality level that uses much lower compression, but that wouldn't usually result in files sizes in the 40MB range unless your images are about 100MP! So it seems there is something else in play. Perhaps you are using another image format, such as PNG or TIFF, that often requires larger file sizes for the same image resolution?

You have the "resampling" option checked in Photoshop's 'Resize Image' dialog. If that option is selected then Photoshop will increase the number of pixels in the image file to match the increase in the "DPI" setting. If your images were set at "72 DPI" and you increase the "DPI" setting to "300 DPI" then the number of pixels along each edge of the image will be multiplied by a factor of 4.167X. That means the total number of pixels (length x width) will increase by a factor of 17.36X! Your uncompressed image that was originally about 0.7MP was exported as a 12MP image!

To keep the same number of pixels but change the "DPI" setting, uncheck the "resampling" option in the 'Resize Image' settings before converting the images.

If you still have access to the scanned documents, my advice would be to rescan them at a high enough resolution make them 3000 x 4000 pixels without needing to resize them and exporting the image in a format that will allow your 12MP images to be smaller than 30+ Megabytes! Particularly if they are all black and white with no color information, there is no need to save them in a full color uncompressed image format as appears to have been the case.

In a publishing environment, the designated "dpi" has real meaning because desktop publishing applications work in real world dimensions such as 'inches' and 'centimeters'.

This is something most of us are no longer used to when working with digital images on a screen or sending directly to a printer. This is because most applications can and do automatically rescale an image to fit a computer screen or to fit a specific size printing paper.

But in a physical publishing environment, many of the applications/programs used to set page layouts actually read and apply the photo's ppi setting (designated as "dpi" in the image metadata) to set the size of the image on the page. Many word processing applications do the same thing if you insert an image into a document. 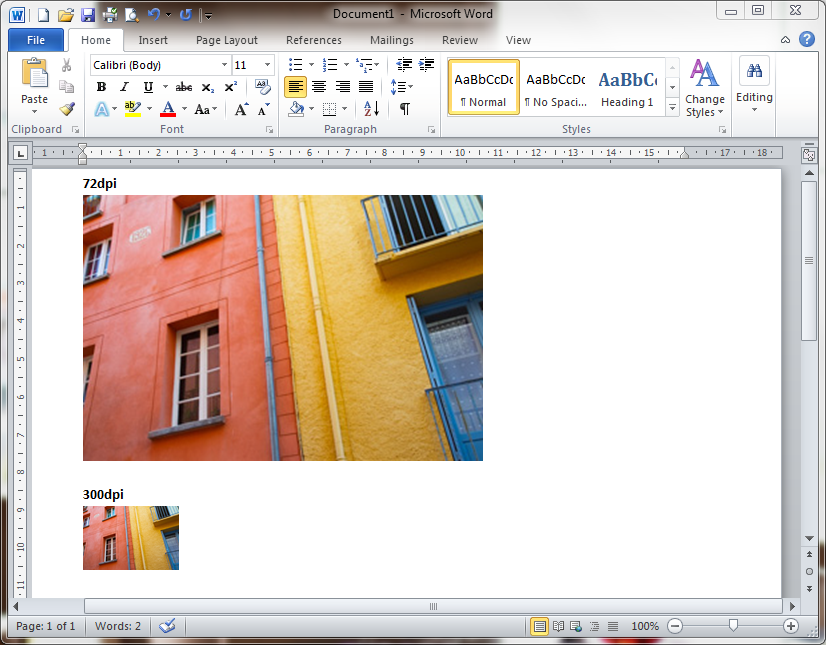 In such a case, you need to:

I was told that they can can accept only 300 DPI pics as it is the best for printing.

This has a different meaning in printing than you seem to expect.

Fill in your own numbers about the expected size on the book page, but it is 300 pixels per inch, over the number of inches it should print.

Book size varies, but about 4x7 inches is a common page size, inside the page margins. The image cannot print larger than the page size.

No. The statement about 300 DPI being "best" most likely comes from the fact that this is incidentially their printer's native resolution. If you scan a document at a given DPI setting, say 200, then the digital image contains so-and-so-many (200 to be precise) points per inch of original image scanned. The same is true -- in reverse -- when printing. You have so and so many pixels total, and they represent an image as-seen of a particular size, giving so-and-so-many pixels per inch. The DPI used for printing and scanning can be, and not rarely are, different.

Now, without specifying the DPI, it is hard to tell what size an image should be, except if you explicitly specify the on-paper dimensions. If you had scanned the same document at 300 DPI instead, it should normally still have the same size as-seen, although the digital image is much larger, with many more pixels. Without knowing the DPI, it would appear 50% larger on paper (or on screen). Other than that, the DPI of your images have little meaning.

The person who told you 300 DPI are "best" probably meant to say that your scans generally have a bit too few pixels to give good print results, and cranking up the DPI setting on the scanner would give better results. Apart from higher DPI metadata, you also get more pixels in your digital image (and much larger files).

Does changing the DPI help anything?

After the fact, not really. First, it doesn't actually change anything except metadata. But more importantly, either you do not need this metadata at all, or you absolutely do need it, but then it must be the original value!

In a book, you most probably have your images layouted at a given size (often so they match exactly the body width, or one half that), and the digital image is resized-to-fit and resampled automatically during print.
Or, you may not care too much about the layout and instead want the image to appear at the same size as in the scanned original. In that case, you need the original DPI figure. Meddling with it gives wrong results.

Does changing the DPI and resampling help anything?

Not really, but well, possibly a little. That's what you have been doing (hence the file got much larger). The inherent problem of resampling/rescaling is that you cannot magically generate information that isn't present within the scan in the first place. You see that kind of thing on the various "CSI" TV series where they zoom in on a selfie, revealing readable letters on a number plate some 500 meters away accidentially caught in the image. Reality doesn't work that way. You generally cannot magically generate information that just isn't there, no matter what supercomputers you have.

However, I am saying "possibly a little" because there is the odd chance that Photoshop (which is not limited by realtime constraints) uses a slightly more favorable resampling method than the printer. It might look very slightly better than the upscaling that the printer is doing. Maybe. Possibly. Or maybe not, it really depends.

Does scanning at higher DPI help anything?

Absolutely. Ideally, you scan and print at exactly the same resolution. Anything else, and the printer must scale/resample. Either one is sub-optimal although scaling down is generally not such a big issue. Scaling up means you must magically generate image information out of nowhere, i.e. you must interpolate the available information in some way.

One may thus be inclined to always scan at the highest possible resolution even if this exceeds the print resolution (and to be honest, that is what I am doing because more is always better) but very strictly, from a technical point of view, this approach is wrong.

Downscaling, too, means resampling, and resampling is never 100% trouble-free (unless in trivial cases like exactly 1:2). Depending on how well the downscaling is implemented, too high DPI could actually give inferior results, in theory you could get all kinds of artefacts (think e.g. Moiré patterns, ringing, whatever).
In practice, I've never seen this being a problem, actual printers seem to do pretty darn good filtering.

I am about to publish a book

A book, what? scientific, commercial, novel, are the illustrations predominant, are they grayscale, color, one color.

I do not mean for you to answer them on a forum post, but more to make you aware that the content, the destination matters.

after uploading the contents

What type of print do you expect? Digital print of let's say 50 copies? will they print more than 1,000?

The resolution is tightly related to the printing method and the paper used. But also it is about the content of the image.

Do you really care about the quality of the final product?

I am afraid you are not doing the optimal way. You are clearly using JPG images with a baaaaaad artifacts issue, which translates into the overall quality of the product.

For an important project, you should let a professional to do the preparing of the book.

But as I said, it depends on the printing process and paper, which relates to the number of copies to be printed.

Normally images have a real resolution on a good quality coated paper, printed on a commercial sheeted press of 150 units. But due an internal process, it is recommended to be of the double of that value, 300 PPI so images are actually "resampled".

But if you are asking on a digital printer, more than 100ppi will do fine. They will not be resampled in the print process. If the pixel is too big so you see if you have pixelation.

If an image is less than 100PPI for example just 50PPI you can blur the pixelations by exactly doubling the size.

Do not be worried about the file sizes being too big. That is normal on a print process... but it seems you were compressing much the images from start...

Not the answer you're looking for? Browse other questions tagged prints dpi or ask your own question.

0
Are 72 dpi and 300 dpi images with the same resolution the same quality?
78
How do I generate high quality prints with an ink jet printer?
35
Is there any practical difference between saving at 300ppi or 72ppi?
0
Do I need to scan prints at higher than 300dpi if I want to make enlargements?

13
What are the minimum DPI and size (in pixels) required to print good 10x15 photos?
9
What DPI should I resize my image to for best printing quality?
10
Why do my scanned images have lines across them?
4
How do you print photos at non-standard sizes?
3
What is meant by pixels and DPI for photo submissions?
4
Is there a way I can scan an A4 photo at 4800 dpi?
2
How large can I print an old illustration?
1
Paper recommendation for 1200 dpi print?