Will a clip-on zoom lens correct the distortion of a wide-angled smartphone lens?

My friend wants to shoot a vlog style series and she doesn't currently own a DSLR, so she was going to shoot with her smartphone. I am aware of the natural distortion of features (noses, foreheads, etc.) that can occur with wider angle lenses, so she asked me about getting a clip on "telephoto" kit for her phone. That got me wondering...

Does a zoom lens mounted on top of a wide angle lens correct any barrel distortion? Or simply magnify it?

distortion smartphone
Share
Improve this question
asked May 24 '18 at 18:43

Here's a very bad mockup of the scene: 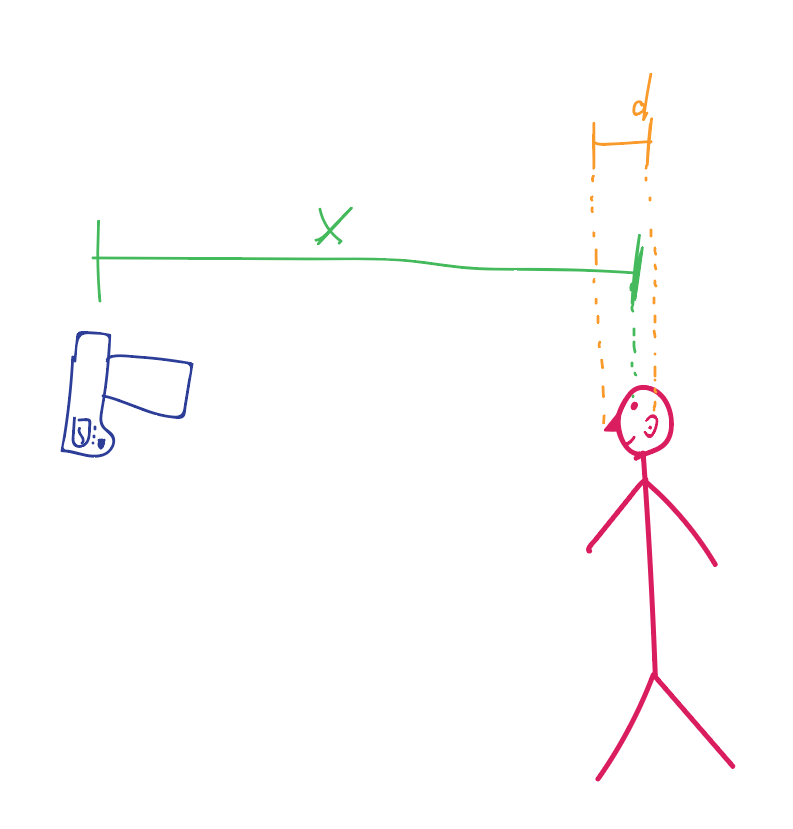 Consider this: When I stand around 200cm away from you (x), the distance between the tip of your nose and your ears (d) is around 10cm, so 5% of the distance me/you. When I stand around 50cm away from you, the distance nose/ear is like 20% of the distance me/you. Therefore, it has a much bigger impact on the picture - with decreasing distance, people's faces (and other things) first appear "flattened", then will appear more plastic and then - when going at closer distances - features of the face will be accentuated/distorted.

So when I shoot a photograph of you at 200cm distance, then your face always will be (relatively) flat - no matter if I use a 100mm lens (a medium shot) or a ultra-wide lens (more of a panoramic shot with you in it). When I change my distance to 50cm, it will look like your nose was bigger than the rest of your face - no matter if I use the same 100mm lens (which will probably lead to a nose-only shot) or a ultra-wide lens (which will now result in a medium shot).

Now depending on the lens in question, it might have a barrel distortion, which means that the middle of the image gets a bit more magnified than the outer portions. While this is usually the case with wide angle lenses, it could also have a pincussion distortion (magnification is stronger towards the outer portions) - or no distortion at all.

As lenses distort the frame, so do adapters. Most professional extenders are built so they counteract the distortion of a lens (a bit) - however, with more generic equipment, it is unlikely that this is the case. Therefore, as worst case, you could end up with double the barrel distortion.

Lens distortion, however, usually does not affect the image as much as does the composition (distance). Therefore, a bit more barrel distortion might still lead to less distorted looking faces than the phone's lens alone, because for the same framing, the distance camera/face will be greater.

Not the answer you're looking for? Browse other questions tagged distortion smartphone or ask your own question.