How does 18 megapixels compare to 12 megapixels? [duplicate]

What is this compared to 12.00 megapixels?

That means 22.5% more pixels in each direction.

If the cameras are otherwise comparable, you get more details with highter resolution. However, 12 megapixel is good enough for most uses. If you for example make 4" x 6" prints, you can't see the difference between 12 megapixel and 18 megapixel. If you enlarge a part of the image, the higher resolution will allow you to enlarge it more.

The resolution, by itself, doesn't mean much. For a meaningful comparison, you need to look at one camera versus another, not one resolution figure compared to another.

At the same time, I should also point out that if you do have at least one really good lens and (for example) use a tripod at least part of the time, there's a fairly reasonable chance that when you use that combination an 18 MP sensor really will produce pictures with slightly higher "real" resolution than a 12 MP sensor.

It's also true that higher resolution in a fixed size of sensor is likely to imply smaller sensor wells, which will typically reduce light collecting ability. In theory that could lead to higher noise. Of course, there's a lot more to noise level than just sensor well size though. The difference in sensor well size is not enough to say with any certainty that a camera with an 18 MP sensor will have higher noise than a camera with a 12 MP sensor (in fact, if the 18 MP sensor is newer, noise might well be lower). If all else was equal, the 12 MP sensor should have lower noise, but all else is almost never equal.

To get a meaningful comparison, you really need to compare one camera to another, not one sensor resolution to another. Sensor resolution is a factor to take into account, but it's only one of many, and it's not (IMO) a particularly important one either.

Edit: Okay, after supper tonight I had a few minutes, so I wrote up a simulator. I'll add a few pictures here: 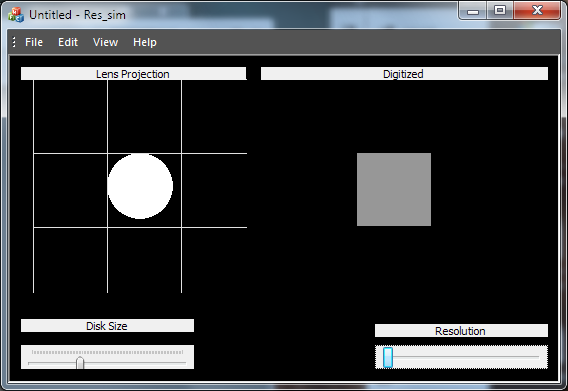 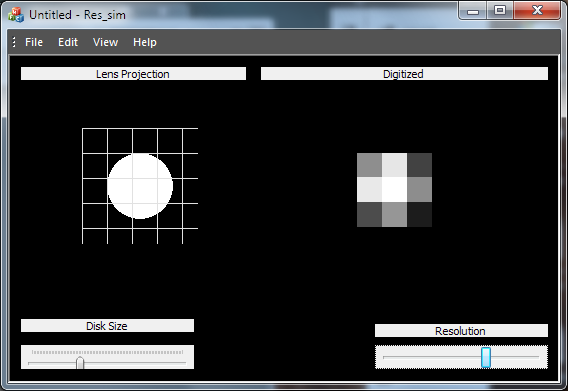 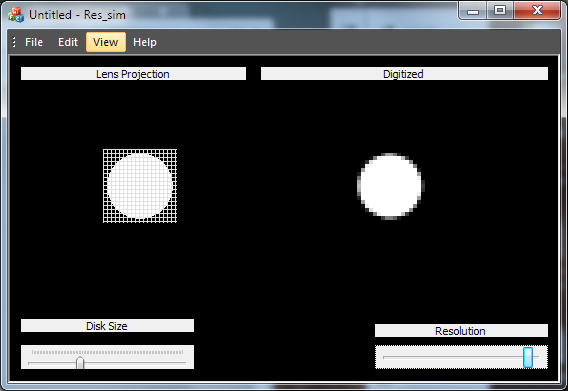 There are two reasons in my mind why you might care about more pixels, one of which might apply to the average photographer, and one that would apply mostly to pros:

If you are asking this question, then you do not need 18mp :) I have a 450D and my friend recently purchased a 550D. We have done several 100%+ totally unnecessary pixel-peeping comparisons of real world scenes on tripods with physically the same lens, and the resolution increase is noticeable but not incredible by any means. For you to actually see a visible difference in a print, it would have to be upwards of 20x14".

That being said, the noise performance of the 550D vs 450D is far more noticeable than the resolution. Yay for Digic4. Overall handling is nicer, and movies are fun to play with. However if you are just comparing 18mp vs 12mp, I would considering it null, buy whichever camera has other things that you want and ignore mp. 12mp is more than acceptable for probably 95% of all pictures taken in the world, 95% of which, probably will never see print anyway, so 3mp would have been enough :D

The 18megapixel camera should be the better camera (especially with it having a 50% higher resolution) however there are other factors in play such as quality of the lens, the sensors sensitivity to noise that will affect the quality of photos. This is much the same as engine size is a reasonable way to measure a cars top speed, it makes the majority of the difference but factors such as weight, quality of tyres will also affect the speed.

Unless you are willing spend a considerable lump of money for the LENSES you will not notice any difference at all. As Guffa already demonstrated, 18 MPix gives you roughly 22% more pixels in either direction. However, if you want to max out the 3464 pixels available vertically you need, as a rule of thumb, a lens which resolves 1700 l/p (line widths/picture height) at MTF50. A (very) good kit lens usually resolves between 1000 and 1200 l/p, even more expensive lenses seldom reach 1700 on an APS-C sized sensor. So, on anything that is smaller than a full frame sensor, 18 MP effectively does not produce much usable additional detail at all.

If you want to see it with you own eyes, then you should have look at dpreviews's exhaustive reviews which feature resolution chart tests for every camera. Here's the resolution of a 18 MP Canon 550D:

compared to the Canon 450D:

If you are jumping from a 12mp full frame camera like the Canon 5D to the 550D, the only advantage you'll get with the 18mp is a larger printing size. I have both cameras and can say the 5D still offers better sharpness, detail, and depth. The 550D offers gorgeous colors and great noise handling, a little better than the 5D, but those things can be tweaked in the computer anyway. I still prefer the 5D not only for the image quality but for its robustness.

53
Do megapixels matter with modern sensor technology?
18
Why are effective pixels greater than the actual resolution?

18
Why are effective pixels greater than the actual resolution?
53
Do megapixels matter with modern sensor technology?
3
At how many megapixels should I render my image for a quality A1 print?
2
Why would a more expensive camera have lower megapixels?
3
Why are there two different megapixel counts listed for still images from the same camcorder?
1
Which is correct, "resolution is megapixels" or "resolution has megapixels"?
0
What digital camera resolution do I need to make a "zoomed-in" image on a website?