How to avoid the grainy background in sunset picture?

I was taking this picture of the sunset. I used auto focus, but the trees are not really that focused. Also, the red background is grainy. 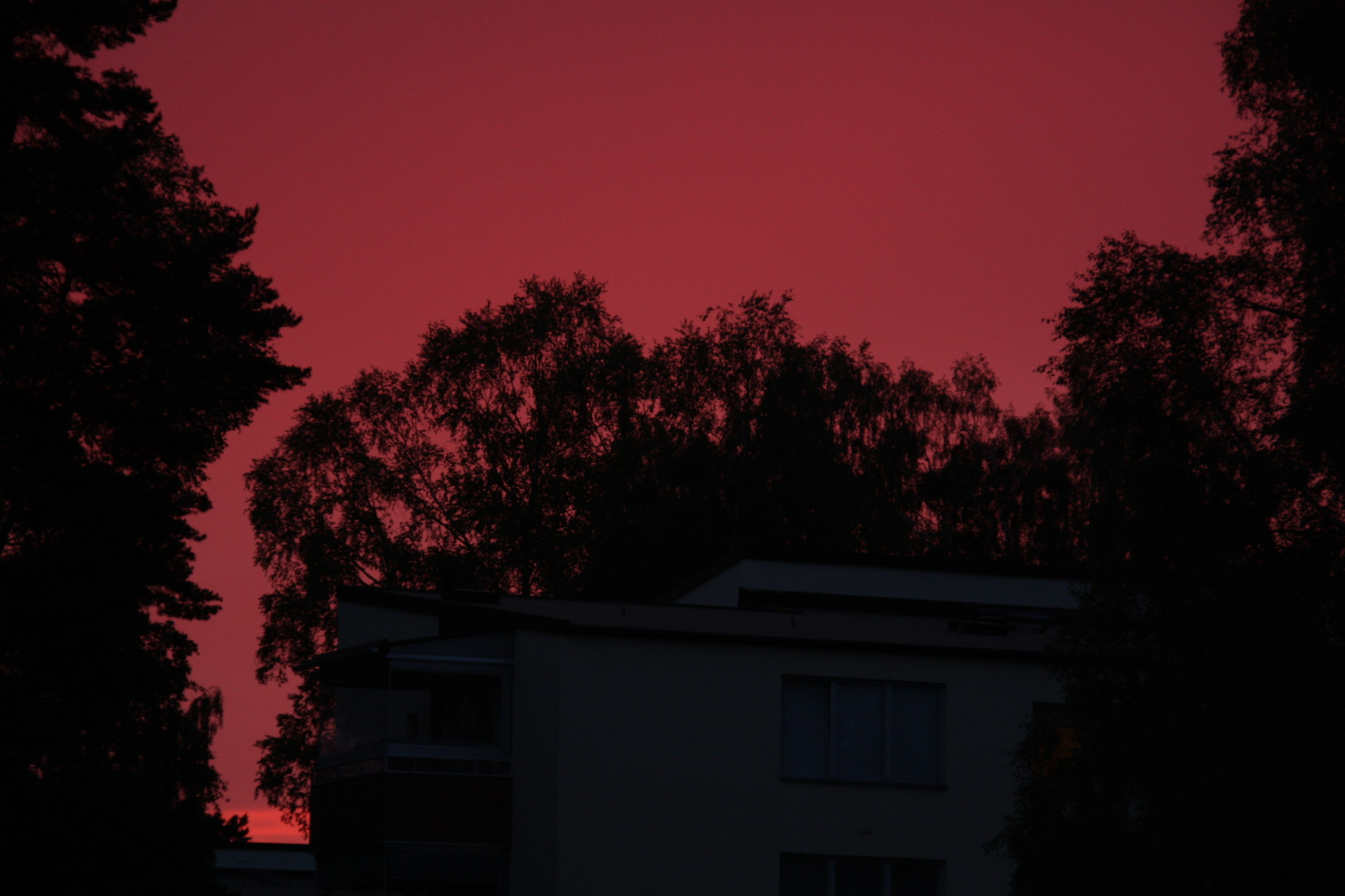 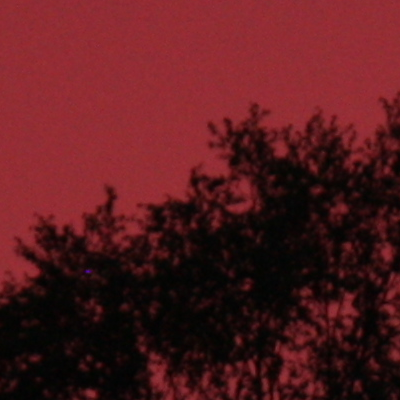 As to the trees being unsharp:

It is very difficult to tell, but I think that the autofocus decided to get the house, not the trees in focus. It really is best to specify a certain AF point (p. 61 in the camera's manual). Or, if shooting from a tripod, use LiveView's freely movable contrast AF (p. 95, 102-106) - or focus manually (p. 98). My second guess, as nothing really seems that sharp, would be that it is due to lack of sharpness. Stop down your lens (start with f/8) and see if things get better.

If you care about great image quality and sharp photos, the Canon EF 75-300mm f/4-5.6 III USM Lens is not for you. And Photoshop cannot enhance details that are not there.

Also, 1/30" could be a bit too long for trees - even very soft wind (soft enough to not be perceptible when wearing something long-sleeved) could move the leaves enough to become blurry because of motion blur.

As to RAW vs JPEG: This has been covered at length here at photo.stackexchange. Take, for example, this answer on "Good examples of RAW's advantages over JPEG?" by @jrista:

The value of RAW is not really in the end result, although it is possible for the end result created with a RAW image to be better than that created with a JPEG. The reason for this has to do with the workflow between snapping a shot and saving or printing a final image. RAW gives you headroom that JPEG can't come close to offering. You have the ability to recover highlights and shadows, apply alternative tone curves, rework old RAW images with newer RAW processing algorithms to get better results, etc.

p. 77 in the manual explains the differentiation between all the modes. As a rule of thumb, use evaluative metering as your default setting. It works well most of the time. I rarely use anything else, and if I do, I usually go for center-weighted average metering. In extreme rare cases, I used partial metering: That mainly helps when having extreme brightness differences between the background and your subject (e.g. black backdrop and flash-lit, white subject - or vice versa). I, for one, never seriously used spot metering.

As said, I usually (> 97% of the time) stay with evaluative metering. I usually either set the exposure myself (using M-mode) or let the camera decide on the ISO, and in the rare occasion that the metering is off, I simply dial in some compensation. With increasing routine, you might even learn to do that on-the-fly, e.g. when I see a dark background that takes most of the frame and a well-lit subject, I know that I need to set a negative exposure compensation. I could just as well use partial or spot metering, but then my subject would have to be in the center of the frame - and I would have to remember that only the center of the frame is evaluated (there is a reason why most cameras show an optional warning in the viewfinder when using spot metering). Your mileage on this may vary, but evaluative metering to me seems like a good default setting for anything, especially for non-studio shots.

Shooting in low light will always be a compromise.

One way or another you have to get enough signal out of the sensor, that means a wide aperture, a slow shutter speed, a high ISO or some combination.

In other words if you stop down the aperture and make the shutter speed shorter as flolilolilo's answer suggests you may improve the sharpness of the leaves, but you will need to use a higher ISO to keep the exposure correct and that is likely to make the background noise worse.

As other answers point out, your problem basically boils down to: not enough light. So one thing you can do to get better sunset images (IMO; I have some here if you want to see where I'm coming from) is to have the sun in the frame, instead of capturing just the dark sky. Because the sun is basically the most powerful light source you can ask for, it will give you enough light to allow you to use at the same time a narrow aperture (so more of the scene will be "in focus") and a fast shutter speed (no motion blur) and still have enough light for the image to be satisfactorily exposed at base ISO.

Note however that your camera's meter will probably be confused by such scenes, so you would need to significantly "underexpose" (relative to what the meter thinks is correct); you can do that either by using negative exposure compensation or switching to M mode and fiddling with the exposure settings.

Not the answer you're looking for? Browse other questions tagged focus sharpness noise canon-450d or ask your own question.

27
How much "noise" is acceptable in a photograph?
29
How can I determine the minimum shutter speed to avoid blur from camera shake?
4
How to change the time before Live-view turns off on a 450D
12
How do I keep both the background and foreground in the image in focus at the same time?
3
Why do my photos appear grainy when taken at the widest aperture?
1
How do I take a photo with sunset and starry sky at the same time
1
Different focus on different parts of the picture
5
Why does my ISO 1600 picture have a grainy background?