Recreating Kate Moss, Life Is A Joke. What lens and lighting? [duplicate]

I want to recreate this Kate Moss, Life Is A Joke image with a friend (and later photoshop in a moustache). I'm unfamiliar with beauty/studio photography. The hair and make up I can wing.

Am I right in thinking one top down soft light; and maybe a 85mm lens?

Edit: I got my lighting answer from this detailed post What is butterfly lighting, and when do I use it? 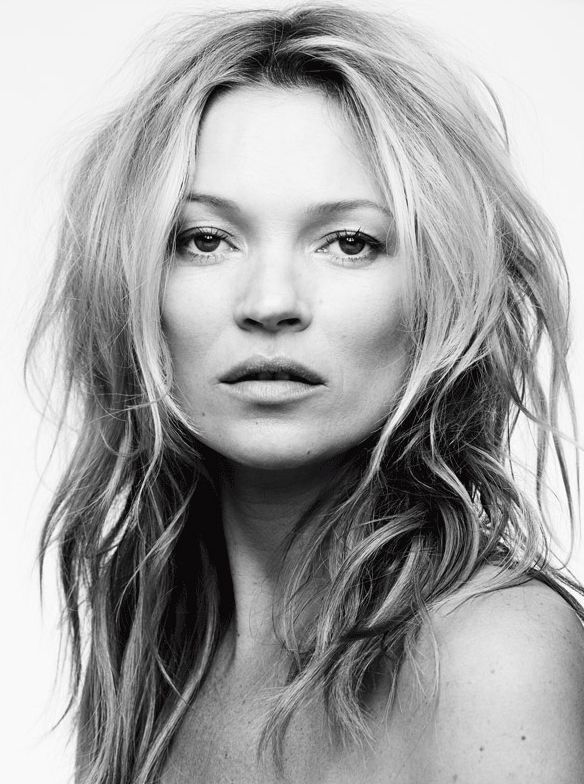 portrait black-and-white
Share
Improve this question
edited May 16 '18 at 6:28

Yep. Butterfly/clamshell lighting. Looks like a large soft box or maybe octobox above and a reflector below, photographing between the two.

I'm no good at guessing the focal length - though anything between 85 and 200mm on a full frame camera would fit the bill for a headshot.

If you take a look at Kate Moss's eyes you can see the relfection of a light source coming from above. As the light looks rather soft (no harsh hot spots or illuminated hair strands) I'd expect a defused light, so probably a softbox.

As there's not any harsh shadows caused by having the light above, under the nose for example theres also a light source or reflector below (as it's B&W can't speculate on colour but I'd personally use silver). It could be a lower powered light source (note theres still some shadow under the bottom lip, cheekbones etc). Personally I'd use a reflector as they're easier to manage than a lightsource plus modifier (again the lighting is soft so you'd need a softbox).

There doesn't appear to be any lighting used on the background as it's not block white, so you could use a white backdrop not light it and use it as a very light grey colour.

As for lens, probably something over a 50mm on FF equivalent.

Also unless you're uber amazing at photoshop, may I suggest using the fake moustache mentioned in the comments. Will save you a lot of time. Just make sure you take photos without as well, just in case. Otherwise you'll have a Henry Cavill, Justice League reshoot issue on your hands!

Not the answer you're looking for? Browse other questions tagged portrait black-and-white or ask your own question.

23
What is butterfly lighting, and when do I use it?

7
What is a loop lighting pattern?
18
What is split portrait lighting?
5
What Nikon lens for both macro and portrait?
4
How can I tell what equipment and lighting setup was used for a studio portrait?
8
What cloth patterns and colours should be preferred for clothes while shooting portraits in black and white?
8
How can I take a low-light portrait of a violinist, without dedicated lighting gear?
21
Portrait Lighting - why are my fill and rim lights overpowered?
4
What type of lens filter goes between the lens and body and has metal flakes in it?