Ask Question
Asked 2 years, 1 month ago
Active 10 months ago
Viewed 701 times
6
This question already has an answer here:
Is there a technique for combining multiple images to create a sharper result? (1 answer)
Closed 10 months ago.

I have a 500mm f/8 mirror lens, which is super cheap and light, but which offers terrible resolving power (and a concomitant difficulty in nailing its manual focus). This 50% crop is pretty much as sharp as it can get: 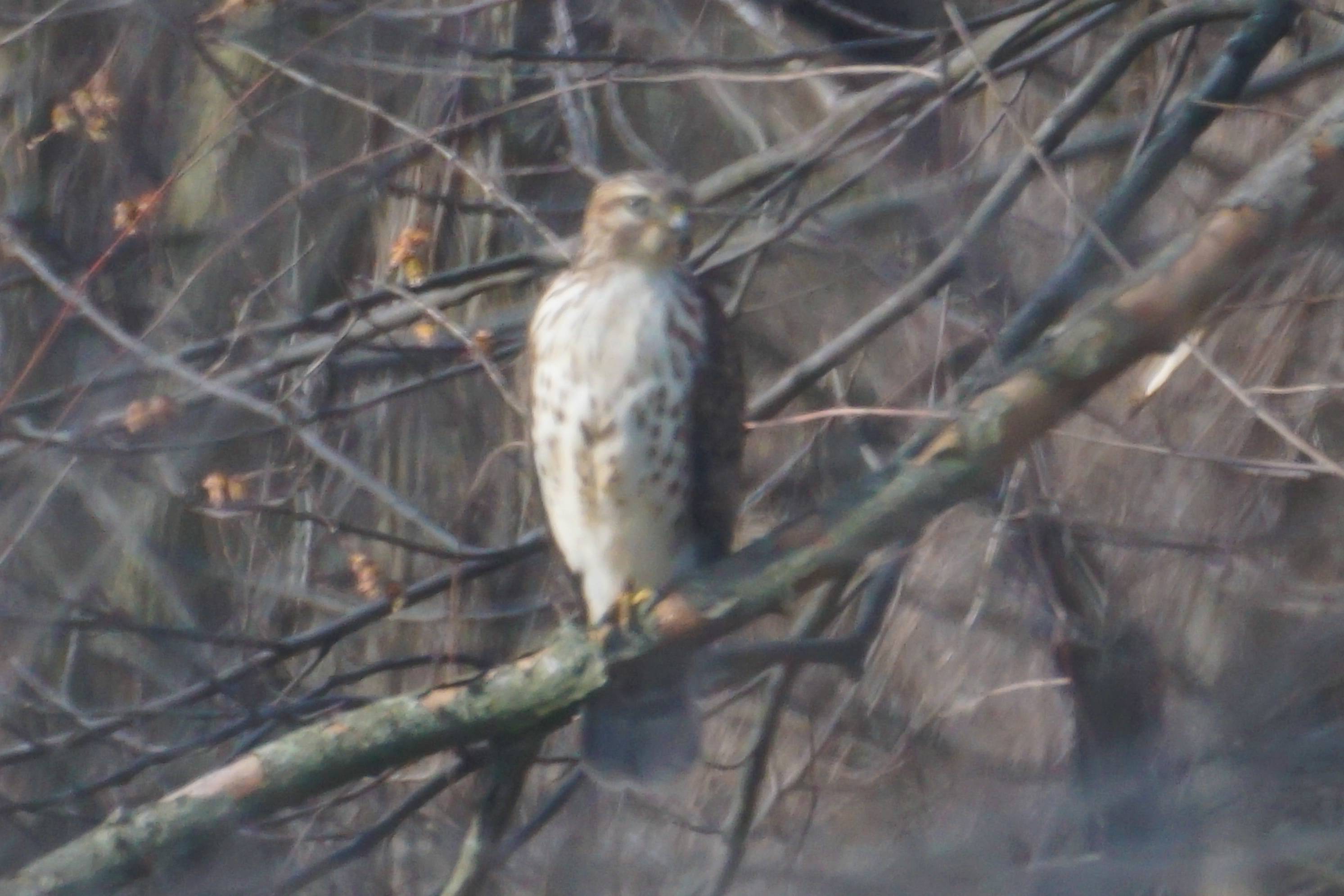 But one feature of the body I'm using is the ability to capture 12fps.

I've seen focus stacking done (usually with some difficulty), and I've also seen software (and now even some cameras) that produce "super-resolution" by stacking rapid exposures of the same scene. I suspect that, at least in theory, one should be able to produce higher resolving power or (equivalently?) lower Gaussian blurring resulting from an inferior optical system like this by incorporating the information in multiple samples of the same scene. Is that correct in theory?

In practice are there any methods or packages that can produce a sharper image from multiple exposures of nearly the same scene?

(To clarify: I imagine that one must stipulate that some minimal change in the scene exist between each image in the stack. But I also imagine that for "de-blurring" this would be on the order of the radial standard deviation that one is attempting decrease. E.g., for distant scenes and/or long focal lengths such small perturbations could conceivably be produced by things like atmospheric disturbance or shutter shake.)

When referring to super-resolution, we usually talk about eliminating noise or doing very slight sensor shifts, therefore getting a higher SNR and/or higher pixel count.

Both techniques assume that one starts with decent pictures. Technology cannot make up information that simply is not there. Super-resolution needs spot-on photos to work, as does focus stacking. Having 200 shots of the milky way that are all way out of focus will not help you to get one very clear one, as the absence of information between the different shots will always be the same (circa).

Another example to get the idea of what is possible would be exposure stacking / HDR - you can get an HDRI out of an underexposed + a properly exposed + an overexposed picture, but take three equally overexposed pictures, and your "HDRI" would hardly differ from one of the original pictures. It is the same with focus.

Disclaimer: The following paragraph is only true if all your photos look like the one you have uploaded here. If focus varies, then technically, it would qualify as focus stacking to me.

The shown picture does not offer much in terms of differentiation e.g. between feathers - and since all of the photos will most probably lack this because it is not the noise of the sensor, but the lens's lack of resolution/sharpness, no software can accurately add this information. In theory, it would be possible to create a software that would add some feather-like texture to any out-of-focus bird, but I would not think that many people would be interested in it, as results would be horrible anyways. You might be able to get the eye a tad sharper if the bird moved around a bit, but that would count as focus-stacking (IMHO). If the main issue is resolution/sharpness of the lens, and not the focus (as it is in the sample image), then you could, in theory, get better results when panning/tilting the lens a bit, as it perhaps has a sweet spot for sharpness and you could get some details there. Again, this does not differ much from doing focus-stacking.

In your situation Focus stacking is not the answer simply because there's nothing sharp in your image. Best to polish it up a bit in post and call it done or purchase some better glass.

This is about all I can get out of it: 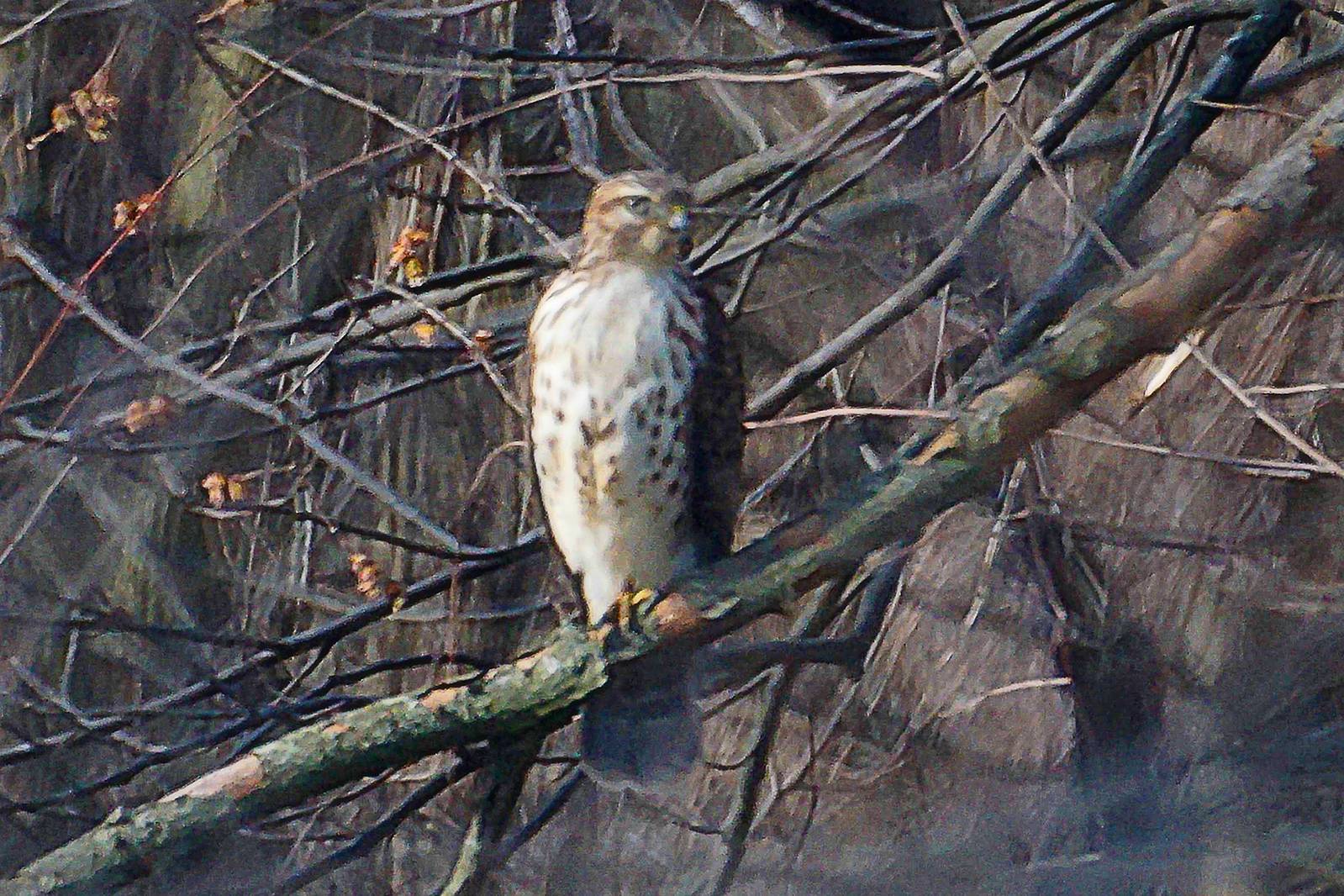 In your case, it seems best to use the stack to only do noise reduction. The sharpened image in R Hall's answer looks quite good, but if you zoom in you'll see that the noise is also enhanced, which is quite typical when applying sharpening. A stack of images can thus be used to reduce this noise (you then need to sharpen each individual image and then average out the enhanced noise over the set of sharpened images). If the original image had been sharper, then with less sharpening needed the enhancement of the noise due to sharpening would be less, and that would give you more room to use super-resolution methods to get to higher resolution images without ending up with ugly noisy pictures full of artifacts.

Stacking to reduce noise and improve OVERALL sharpness is a technique which is already well established in astrophotography (it's called Lucky imaging) and Hasselblad have a proprietary version of it with one of their eyewateringly expensive MF digital cameras but surprisingly, nobody else to my knowledge, not Adobe or any other professional photography software product not intended for astrophography has implemented a purpose made version of this for the general photographer. The image you show has many aberrations (unsharpness, possibly diffraction, noise, poor contrast, poor bokeh). The other posts are correct that if all of your initial shots are not sharp, you will not get a sharp final image - you may improve it by Lucky imaging because you will be correcting other aberrations (mainly noise) and maximising what sharpness you can get. You can also get away with more contrast adjustment in post (and reduce the poor contrast) because you will have less noise. This technique however depends on a non moving object. It is difficult with a long lens, even with a good tripod and impossible where there is wind and moving living creatures: even with a high frame rates, the relative motion of twigs in that tree and the bird will create the equivalent of motion blur which is not correctable even with image alignment.

Not the answer you're looking for? Browse other questions tagged image-stacking sharpening or ask your own question.

6
Is there a technique for combining multiple images to create a sharper result?

16
What is image stacking as it relates to astrophotography?
0
Image stacking with different camera settings
9
Linux software for stacking and RAW processing
2
Why does frame stacking alter colours?
1
Stacking Photos
1
Image Stacking for macrophotography