I took this long exposure of the night sky with my phone, the exposure lasted for 5 minutes. After seeing it, I saw this weird streak going across the photo. I compared it to other long exposures on Google of planes meteors, etc. but I couldn't find anything that looks like it, could those weird intervals be blinking lights? (If I'm in the wrong forum Im sorry) 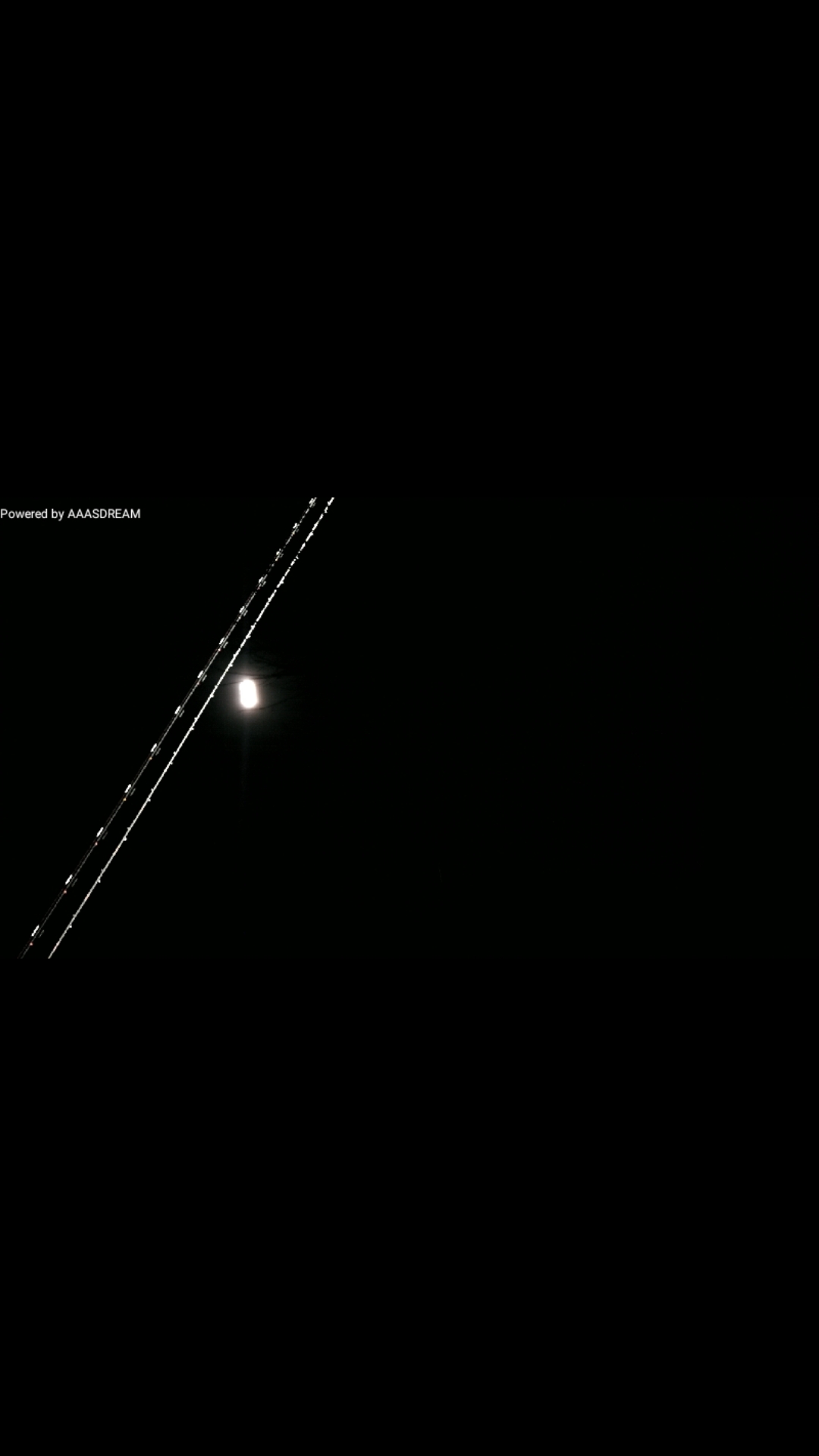 The change in distance between each blink could indicate the plane is either accelerating after taking off from an airport or decelerating in preparation to land. This would also explain why the constantly on takeoff/landing lights are also illuminated. During sustained flight at cruising altitudes the takeoff/landing lights are turned off. Larger commercial aircraft tend to have a set of landing lights on each wing. Smaller planes often only have one. The pulses from the blinking strobes also tend to be more evenly spaced when the plane is not taking off/landing because the plane is cruising at a more constant speed. The very dim solid lines are the non-blinking navigation lights.

Another possibility is that the plane is moving on a path that leads almost directly towards or away from your camera position. As the distance increases, the space between each regular interval flash will appear to become smaller and smaller.

Think of it like crossties on a railroad track. Of you are on a high tower looking directly down to tracks that are perpendicular to the direction of your gaze, the crossties will all appear more or less evenly spaced. But if you are standing in the middle of the tracks looking at them receded in the distance, each crosstie will appear successively smaller and smaller, with a smaller measurable angle between each one. Or think of a car that passes you while you are standing on the side of a road. It seems to be moving much faster as it passes you than it does when it is several hundred meters away. This is because the change per second in the angular position of the car is greater when it is right next to you than when it is in the distance.

Here's what a long exposure of a plane landing looks like from underneath the final approach area: 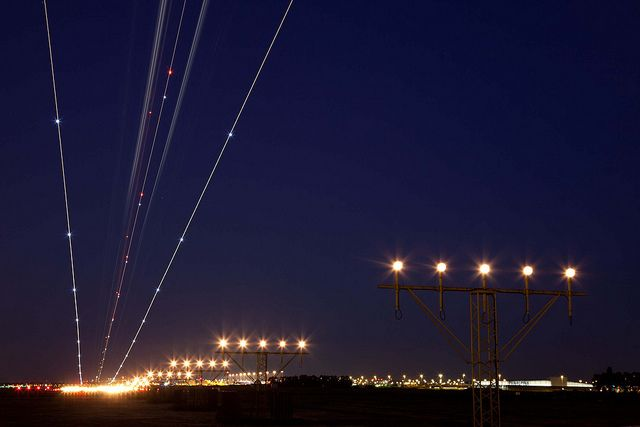 The 30 second exposure below shows 24 blinks from the navigation lights of a passing plane at high altitude. It also shows a tumbling rocket body in orbit reflect the light from the sun that is not too far beneath the distant horizon. 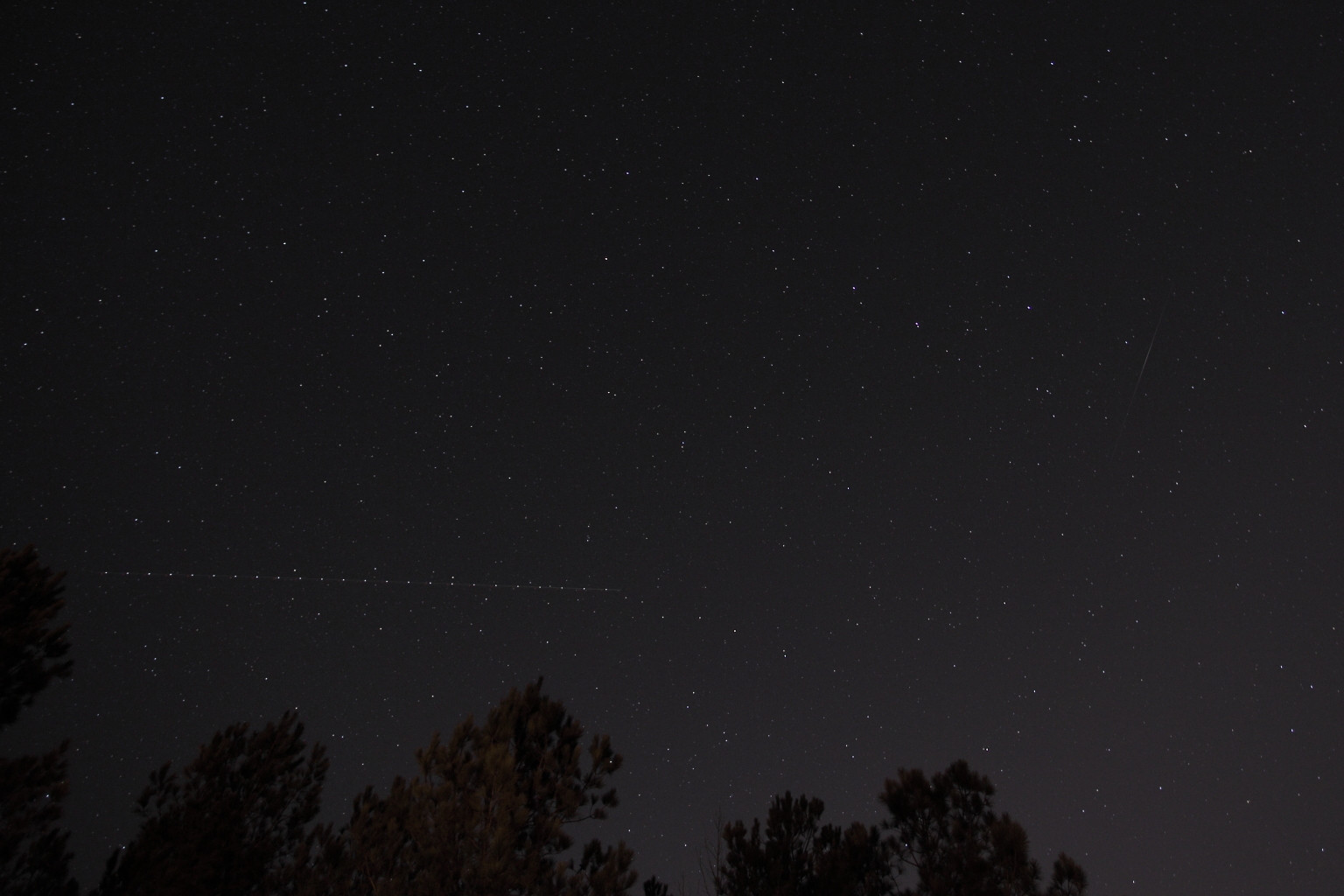 The satellite's orbit was consistent with CZ-2D, a rocket booster launched 11/20/2011 from the People's Republic of China. It is a spent rocket booster and is probably tumbling, which explains the variation in brightness. Photo was taken 05:17CST (11:17Z) on 2012-12-14 from the Southeastern United States. Ursa Major (The Big Dipper) is just to the left of the satellite's trail.

This blog entry shows a plane passing overhead and turning in the distance during a very long star trail exposure that included four Perseid meteors.

Not the answer you're looking for? Browse other questions tagged long-exposure or ask your own question.