This question is about some slight confusion about evaluative metering on a Canon EOS-1V (and possibly early 1D bodies as well).

In the manual, the picture for evaluative metering looks like this:

Further, it states that evaluative metering divides the viewfinder

into 21 metering zones to which all the focusing points are linked for evaluative metering.

I am confused by the statement "all focusing points". 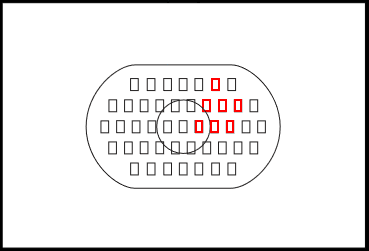 It doesn't mean that all AF points are given equal weight for every time you meter, it just means that every one of the AF points is linked to the specific metering zones that cover the same area as that AF point. At any given time, if a particular AF point registers as 'in-focus', then the metering area linked to that AF point will receive weight based on that.

If you are using a focus mode with more than one focus point selected, the camera will focus on the area of greatest contrast it detects within any of the areas those active focus points cover (Hint: the area of sensitivity for each AF point is larger than the little rectangle you see in the viewfinder).

What about multiple focus points, e.g. when using the automatic selection of focus points SEL [ ] which might yield something like in the picture below? Is there more emphasis put on those metering zones that "map to" the active focus points?

See above. There's only one area of greatest contrast that the AF system is locked in on. If any other AF points are lit up in the viewfinder it means that they are also confirmed to also be sufficiently in focus to be considered 'in-focus'. But only one area of contrast within one AF point is actually being used to focus the lens. The camera searches for that area of highest contrast from among the coverage areas for all of the active AF points.

Apart from autofocus information, there are a myriad of other factors that determine the weighting of each metering zone when using Evaluative Metering. As the EOS system has developed since it was introduced in 1987, Evaluative Metering has also evolved. It's gotten better with age as processing power and memory capacity have increased tremendously, not to mention the advent of color sensitive RGB+IR light meters.

3
Pictures of surfers start in focus then go out of focus?

10
How do I determine focus points in Adobe Lightroom?
2
How do Canon 600D and 650D compare with respect to focus points types?
2
Can changing metering mode change focus?
0
Does making a focus area smaller in spot metering help with focusing?
5
How to use focus points in manual focus mode on Canon EOS 6D?
1
Why did my Canon 80D recommend such a fast shutter speed in near-total darkness?