Is the smaller mass and bulk of Micro Four Thirds gear vs. APS-C DSLRs meaningful?

I currently have a Nikon D90 and a few DX and FX lenses. I am thinking about changing to Micro Four Thirds (as it's a drag carrying around a big DSLR all the time, and my most important shoots are on long hikes) and wondering if the mass and bulk savings is meaningful, and if so by how much.

I've done a little tinkering in a spreadsheet and am coming up with a mass savings of 30-40%, and I'm wondering what the real world is like.

[In contrast with the earlier question about Micro Four Thirds, which focuses on the sensor and IQ differences, here I'm more concerned about the (in)convenience level of transporting the gear. Earlier versions of this question were not so clear on that, and I am sorry for the confusion.]

This question still has no accepted answer, so let me try to answer it more concretely.

Yes, it is. Now, I am sure there are multiple ways of measuring, so observations may vary.

If you are aiming for the least possible weight, each Micro Zuiko lens is usually lighter than nearly all APS-C compatible lenses given an equivalent field of view. There are exceptions on some focal-lengths (like the Pentax 21mm F/3.2) but, when considering a whole set, the size difference is significant.

For an article I am writing, Olympus sent me all their Micro Four-Thirds lenses. So here is a shot of lenses covering the 9 to 300mm (18 to 600mm equivalent) next to a 300mL juice (for scale): 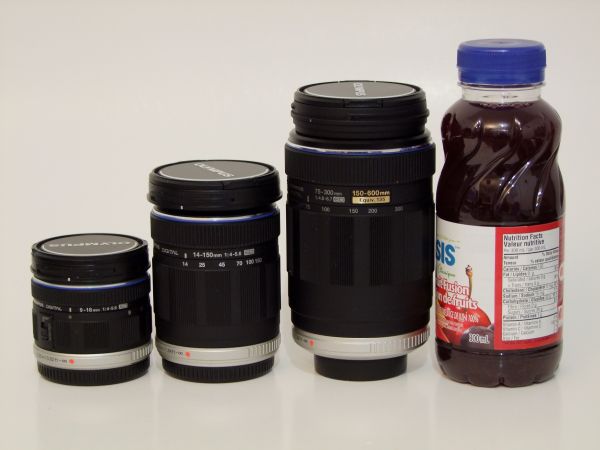 Of course, this is not an exact match. There are slight differences in focal-lengths and maximum aperture. A closer match may be possible (perhaps with small gaps in the range) but I doubt that much coverage can be obtained with lenses taking up about the same space as two 300mL juice bottles.

Just for what it's worth, there is an alternative: Sony's NEX series EVIL cameras are pretty much the same size as micro-4/3rds, but have an APS-C sized sensor. They've recently signed up Zeiss, Cosina, Sigma and Tamron to build lenses and generally support the mount they're using, so while it may not have quite as many companies involved, it's still a fair number of solid companies that should provide a pretty reasonable range of lenses. At a guess, there's a pretty fair chance that at least one of those will start to build bodies as well. Like micro-4/3rds, the flange distance is short enough to allow adapters for almost any existing interchangeable lens.

Edit: I should add that IMO, the reduced size and weight of micro-4/3rds is probably less a result of the format change that of eliminating the entire SLR mechanism. A pentaprism is a big, relatively heavy chunk of glass. The mirror and ability to flip it out of the way dictates a minimum distance from the lens to the shutter, and so on.

I think, however, there's one more factor to keep in mind: micro-4/3rds (and non-micro 4/3rds before it) were/are originated primarily by Olympus. Olympus has been placing an emphasis on their cameras being smaller and lighter than the competition for decades. Even back when they were all building full-frame 35mm SLRs, the Olympus OM-1 (for only one example) was substantially smaller and lighter than the Canon F1 or Nikon F. Likewise, for decades Olympus lenses were generally the smallest and lightest in their category, but were still excellent both optically and mechanically.

In APS-C SLRs, Pentax's line is rather similar. They're substantially smaller and lighter than almost anything else, with no compromise in either optical or mechanical quality. That's not to say that a Pentax SLR competes with micro-4/3rds or NEX in size or weight, but it does show that size and weight can often be reduced without changing formats or losing quality.

Edit2: I have to disagree with the claim that NEX 5 lenses will "necessarily" be any larger or heavier than equivalent micro-4/3rds lenses. At least based on current lineups, it looks to me like most weight differences depend more on features and construction than the difference in sensor size.

For example, it's absolutely true that the Olympus 14-140 mm lens is considerably lighter than the Sony 18-200. It's also true that the Sony uses a metal body, includes image stabilization, and every review I've seen says the build quality is extremely good. By contrast, the Olympus uses a plastic body, lacks image stabilization, and about the best anybody seems to be able to say about its build quality is that it doesn't seem to cause any major problem in real use.

If you want image stabilization and better construction you can get that in the Panasonic/Leica 14-150mm lens -- but it also weighs about the same as the Sony (a tiny bit more, AAMOF).

I would just like to add to the NEX comment that while the body is smaller than current mFT cameras, the lenses are necessarily going to be larger and most likely also heavier than mFT lenses of equivalent focal lengths and maximum aperture.

I personally do not think so (based on your description considering mainly bulk and mass). In the film days I had an Advantix DSLR, which was a smaller body that had smaller lenses. While it was lighter and more compact than the more traditionally sized DSLR I have today, I found that generally anything that needs a case means you have around the same level of bulk to deal with around you. For longer hikes weight can certainly be an issue but bulk I think is more of a problem for most people in day to day use.

That is not to discourage you from getting such a system, I just did not find that I ended up carrying a smaller camera system around more often than the larger system I have now, again the savings are mainly in reduction of weight.

I think the easiest way to answer this is visually, using camerasize.com. Your D90 combination is already small and light for dSLRs, so you won't see as much as say, someone using a full frame body and 24-70/2.8 + 70-200/2.8 combo would.

I've swapped out your selection of the EP-2 + viewfinder for an EM-5 (integrated viewfinder: 400g) since used prices are pretty good now. As the Nikon 70-300 isn't in the camerasize database, I used the Sigma 70-300 instead; adjust accordingly.

The savings do depend upon the individual lenses you're looking at.

Not the answer you're looking for? Browse other questions tagged dslr micro-four-thirds aps-c or ask your own question.

32
How do Micro 4/3s cameras compare with DSLR cameras?