What is the antonym of "feathering" in lighting?

If I have to tell someone to move "unfeather" the light and point it towards the subject, what verb should I use? Gather?

The edge of most luminary output [beam] spread is more diffuse than the centre. A lighting technician will sometimes point a source "off-axis" to get a more or less indirect beam to "feather" it.

The term(s) I would use is to aim, point, or direct the beam of the light more towards the subject. You want to "harden" the light rather than "soften" (another term for feather) it.

Sometimes a "barn door" or "gobo" [go-between] is used in the path of the light so as to cause a light shadow that does the job. In this event, you would turn your attention to the accessory that's causing the [un]desired effect.

Thin translucent screens or "scrims" are also used directly in the path of the light to soften the harsh direct beam of a light to feather it. In this case, you would use less material or thinner diffuser or even remove the "flag" entirely. Flags, which are normally opaque are used to block light like a "barn-door," can also be made of other materials. A flag is called such due to being attached to an independent support not part of another lighting fixture in the set-up. It looks like a flag.

A white or crushed-foil reflector can be used to feather a light. In this case you would use a more "specular" reflection material or a smoother-surfaced foil reflector.

All of that pedantry aside, I would say, "Could you harden the light a bit." Then, more if that wasn't enough to satisfy me.

I would say "slightly defeather" the light, or just say to point it a bit more directly toward the subject. Since feathering (in this context) is not a term covered by any dictionaries I've consulted (and I did just check a few), I think that the term meaning to move in the direction opposite of feathering is still to be established. ;-)

Probably "Turn the light that way" will work.

I am so dumb. I first read "Anatomy"... And made this sketch. Now I realize it was not the question. I'll post it anyway n_n 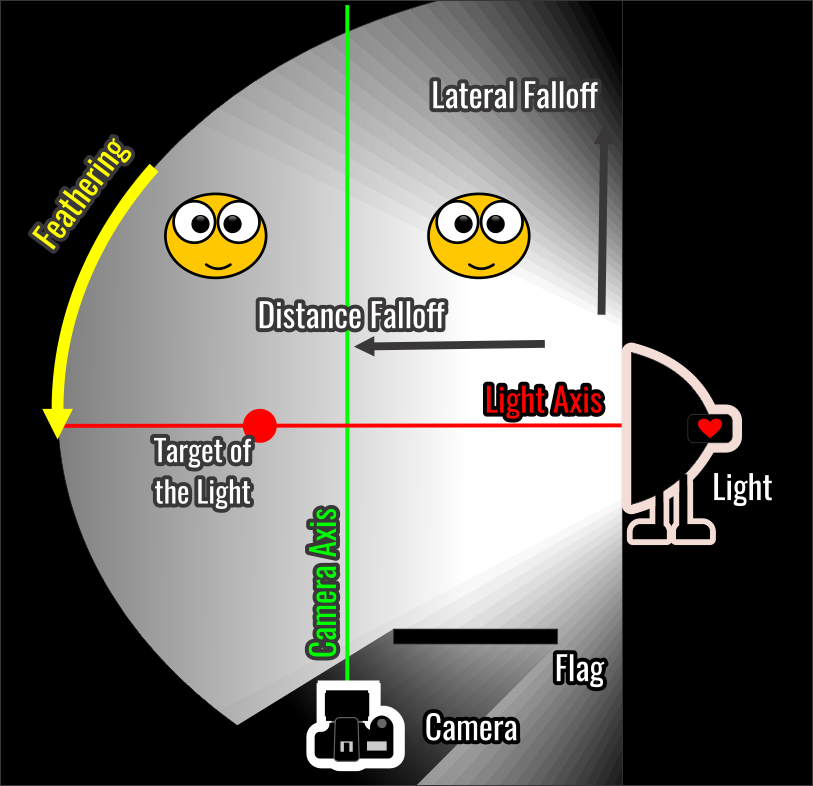 The antonym of feathering is "full".

Not the answer you're looking for? Browse other questions tagged lighting terminology or ask your own question.

19
What is "feathering" a light?
115
In portrait photography, what is 'broad' lighting? What is 'short' lighting?
5
How should I light 2d artwork in a makeshift studio? What lighting products do I need?
1
Looking for lighting for 3-light setup
4
What's the difference between LED and conventional lighting?
4
How do I create a lighting setup where the centre is lighter than edges?
1
Lighting for amateur portraits
5
Clamshell/butterfly lighting - Should the lights move with the head?
5
How do I plan for the lighting for landscape photography?