What are good photography projects?

I am currently in the middle of a year long photo a day project, and am beginning to think about what I will do once this is done.

What types of photography projects have you done?

Do the opposite: A day a photo. You are only allowed to take a single photo each day, so choose wisely. :)

This would not be something for a long running project, but you could try it for a few days, just to get a completely different view on photography.

One that I've done is: Draw a random walk (say, 12 points, each 200 yards apart) on a map. Go and take at least one photo at each point, no matter how uninspiring you find it when you get there.

If you're a programmer, you can generate walks with Google maps/Bing maps (my own horrible implementation is here, and I apologise in advance for the UI...). If not, then print a map and just trace around some household object to get a nice random route.

Constraints drive creativity. So take away your choices during shooting. Go out with just one camera and fixed lens. Shoot only black and white. Shoot slide film. Buy yourself some ancient camera.

Alternatively work with something you hate. Hate lens flare - so make a picture where you actually like lens flare. Hate high ISO noise - again, make it work for you.

I had a "Dogme 95"-inspired project a couple of years ago (and still do it, occasionally). I set up a strict set of rules for my photography, which caused me to start making images in a different manner from what I was used to. The set of rules was:

The images that I produced under this set of rules came out with a somewhat darker atmosphere than I had done before, and it also made me look for subjects in a new manner.

One of the (in my personal opinion) better images that came out of this was this one (showing rain drops falling onto a water surface):

The "100 strangers" project is something I've been meaning to try for a while, but I haven't yet.

I am almost finished on my 2nd year of photo-a-day though, and I expect that I'll probably keep doing a photo a day for the rest of my life. It's worth it just for the memories attached to them, and I'm already saying that before I've finished my second year :)

Spare change for a portrait - Whenever someone approaches you and asks you for money, ask them if you can take a portrait of them in exchange for the money. Inspired by Thomas Hawk's $2 Portraits set.

In my study they mentioned picking subjects that:

Whatever you pick make sure you can stick it out. If you get bored of a subject, it will show in your images. It can be as conceptual or easily accessible as you like.

The final project I did while studying was with a charity. By working for a charity, you probably won't be paid, but you will have an experience you won't forget, they will have images for whatever they need them for and you may walk away with some good portfolio stuffers.

If that doesn't float your boat, work out where you want your photography to go, and try to come up with projects along those lines. It may help to start with, "I like how ____(insert any other photographers name) images always grab my attention. How can I do something similar but with my flavour/vision/experiences?"

Letters of the Alphabet

I have done a Variation of the A-Z project, it involves taking photographs of the shapes of letters arround you, wether this is in the garden or home, or in a park, where ever.

The onesbelow were taken on a 50mm at f1.8 and that was an added part of my challenge. 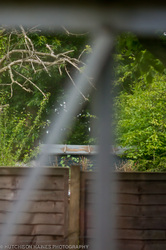 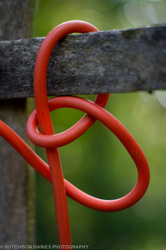 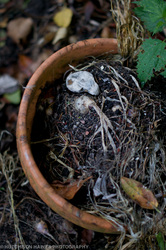 I've been thinking about dragging my camera out to the same point on a trail several times a week for a year, then combining all the images into a video. Then I realized I was too lazy to do that.

There's always the subject A-Z with your photo's successive subjects in alphabetic order (for more of a challenge, try and go it for photos that relate to your local area - as an example, a few people have done this on Flickr)

Like Night and Day - Take two shots of the same scene, one during the day and one at night, to show the contrast between night and day. Inspired by Roger Barnes.

As others have said, constraints are frequently valuable in such projects.

Sometimes, a set of constraints can spontaneously develop -- figure out that you're excited about taking pictures in a particular time/place/situation, pick some attributes of that, and repeat them. For example, I did a series for about 15 months where I went "Downtown on the 1st" -- I went to a specific corner in Downtown Seattle, and watched and photographed people passing by.

The original inspiration: It was snowing one day (a not-unheard-of but relatively-rare event in Seattle), and I happened to be downtown with a camera, and I decided I wanted to take photos of peoples' reactions to the snow. So I wandered around until I found someplace that seemed to have a good vantage for some people-watching, and started shooting. I later noticed that it had been the 1st of December when I'd done this. And in so noticing, a project was born -- on the 1st of every month after that, for a little over a year, I went down to the same corner I'd ended up on, stood in the same basic place, and photographed people going by.

I made some friends during this process (street musicians, mostly), met some interesting characters, and took a whole bunch of pictures. :)

My point with this answer, though, is not necessarily that you do a project like that (though you're welcome to), but rather that you might notice something specific that you're already doing, and decide to push yourself to replicate that, repeatedly.

Also, I'm not sure where best to mention it, so I'll just do so here: There's some interesting talk in Photography Your Way about assigning projects to yourself. Might be worth a read.

Open a dictionary, choose a random word, take a picture to "illustrate" it!
This can be a complement of a 365 project.

I'm beginning a project where i re-take very old photographs of my hometown.

I got some old photos on an old multimedia cd-rom and some blogs, and still are in the process of sorting and geotagging them. Later i will re-take the best ones!

The contrast and the changes in the streets and buildings are very interesting, i'm having a blast just going through all those old photos - and i recently found that the municipal archive has a lot more material than i can ever attempt to parse by myself.

I'll eventually make a blog or webpage with side by side comparison :)

If you want to improve portraiture, then try to photograph a 100 different people -- ideally people you'd not previously met (always advisable to get their permission, and avoid children thoguh)

If you don't want to come up with the assignments yourself at first, check out The Daily Shoot. You follow them on twitter, upload the photo you take for the assignment to any one of a number of photo-sharing sites, and tweet a link to your photo with @dailyshoot and the assignment hashtag in it. dailyshoot.com picks up all such references and displays them in a grid on the website.

I've only tried it a couple of times, but I enjoyed it.

Saw this the other day thought it was a good little project:

I'm currently working on a project with the theme "Doors".

Pick a common object, and see how many different photos you can take with that object as the subject. Look for ways that are not obvious. I once did American Flags, and after many pictures of flagpoles, started looking for flags in reflections, flags on cars, etc...

My next one is going to be "People In Bars"

One passibility is DPChallenge -- the Digital Photography Challenge. They post several new challenges each week on Tuesdays, and sometimes "speed challenges" (and other special challenges?) in between.

I haven't participated much in a while, but I still check it frequently, and will sometimes shoot for a challenge if it inspires me.

The basic process is this:

The challenges tend to have a fair bit of latitude for interpretation, while also being somewhat specific in ways... so, it can get you thinking. And I've seen some pretty amazing images come out of it -- the winners are often quite impressive.

One thing I have tried is to go out with a friend who also likes photography and we set a challenge, such as 'best bokeh' and see who can get the best photo from the location. Then we go somewhere else and try something else. One thing I have though of doing for the next time we do this is writing down places on pieces of card and topics/subjects on pieces of cards and then picking randomly from each pile. You could even separate the 3. So it could be at 'the beach' shooting 'portraits' with 'lens flare'.

One thing I very much like is decay. This can be anything from mouldy food, to rusty padlocks.

As you go about your day, don't worry about it too much, but just become a little more 'aware' of the old things around you. A battered old car, weathered and peeling paint on the side of a building... Flowers that have bloomed and now withering and dying in the cold of winter... Just anything that isn't shiny and new!

Then, get in close. If you have a macro lens, great. Otherwise stick your lens right in and find the art hidden within...

Me? I'm a big fan of rust... Sounds boring, but it is so intricate and colourful close-up!

Not the answer you're looking for? Browse other questions tagged fun learning project or ask your own question.

4
What are some easy projects to start with?
117
What are your easiest photography beginner tips?
17
What good DIY projects (which involve a digital camera) do you know?
12
Where do you find the inspiration for your photographs?
4
What are good/memorable Photography Society topics or events?
-2
Time, Identity, & memory

117
What are your easiest photography beginner tips?
18
What camera first made you fall in love with photography?
17
Ideas for Daily Exercises to Improve Photography Technique
4
Projects to do if you have an additional camera
2
Camera suggestion needed for long term remote timelapse
2
How focused should a local photographer's website be?