What does "magnification" mean?

When speaking about lenses, especially for macro-photography, I often hear about magnification. Sometimes it appears in the form of a ratio (1:1, 1:2), sometimes as a single number (0.5x).

What does magnification mean for a lens? For an extension tube? For a filter?

At the most basic level, magnification means the size of an actual object in front of the camera compared to the size of the image of that object as projected by the lens onto the imaging plane.

Some macro lenses can project larger than life sized images. The Canon MP-E 65mm 1-5X Macro can focus closely enough to give a 5:1 / 5.0X / 500% magnification. That means a 10mm object would be projected at 50mm which would not even fit on the diagonal of a 36x24mm full frame sensor!

"Macro filters" are usually described in terms of diopters, the same as with reading glasses. A +2 diopter magnifying lens does not necessarily equate to increasing a lens' maximum magnification by a factor of two. Rather, by dividing 1000mm by the diopter power of a lens, one can get the distance at which objects will be in focus if the host lens is focused at infinity (before the diopter lens is attached). A +2 diopter lens attached to a lens focused on infinity will reduce the focus distance so that objects 500mm away are in focus. A +3 diopter lens will reduce the focus distance to 333mm, and so on. But since the maximum magnification of a lens is measured when it is at that lens' minimum focus distance and not at infinity, there's no easy way to translate diopters into magnification.

For more about extension tubes and screw on "close-up filters", and when each might be preferable, please see: What's the difference between a diopter and an extension tube?

But we rarely, if ever, look at images at the size they are projected onto a digital image sensor. We once did, and sometimes still do, make contact prints from medium and large format film cameras - an 8x10" negative was used to make an 8x10" print without the need for an enlarger. So were 5x7" or 4x5" or 6x4.5cm negatives used to make 5x7", 4x5", or 6x4.5cm contact prints. We would often create a "contact sheet" for a roll of 135 film in which each frame was 36x24mm on a larger sheet that had the entire roll placed in several rows after the negatives had been developed and trimmed.

To get the total magnification, we need to also include the enlargement ratio used to display an image.

Keep in mind that lenses only achieve their maximum magnification ratio (MM) at their minimum focus distance (MFD). If you have a lens with a MM of 1:2 at a 20 inch MFD and you focused on an object 40 inches away, the resulting magnification for that object in the image would only be about 1:4.

Now I could measure the size of the projected image. 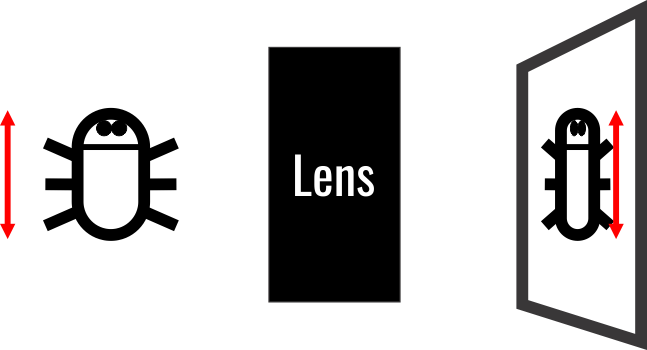 And now let's see how the numbers relate using some examples. 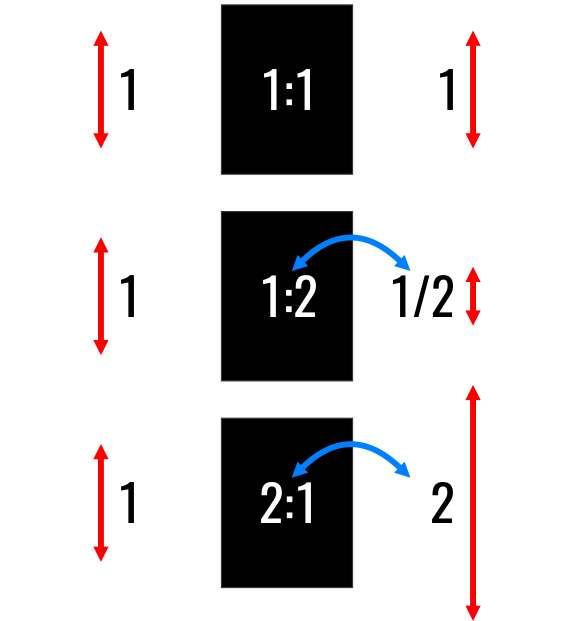 If the projected image is the same size as the original one, the relationship is 1:1

If it measures half of the original the resulting image is 1/2, the relationship is 1:2

If the image is bigger than the original, for example, 2 times larger, the relationship is 2:1

It is pretty straightforward.

It does not matter if it is just a macro lens, extension tubes, a combo of lenses.

It does not care about the sensor size, the Megapixels of your camera, or even if you have a camera at all. It relates ONLY to the ratio between the object in front and the resulting image.

It does not relate to inches, to cm, or mm, or even bug units. Again, it only relates to the relationship between sizes.

The 1x, 2x or .5x is exactly the same as 1/1, 2/1, 1/2 respectively. But this type of numbers can be confused with a way of describing a zoom lens range, in point and shoot cameras it can relate to the minimum zoom and maximum zoom of the lens.

So keep that in mind.

We do not like decimal numbers in ratios. Macro-lens-configuration can have for example a 1 to 1.5 ratio.

Yes, you could say that is a 1:1.5 but somehow looks ugly, so if we simply multiply this by 2 we have a 2:3 relationship. We don't like decimal numbers here.

The projected image is all about the physical projection. As I mentioned it does not relate to the sensor size or the megapixels, but the resulting digital image does relate to them:

But those factors are independent of the magnification of the lens.

Magnification is simply the ratio between the actual size of the object and the size of the image projected onto the camera's sensor - i.e. the same definition as used in traditional optics. For example, if a object has a real size of 10mm:

Not the answer you're looking for? Browse other questions tagged macro terminology or ask your own question.

7
Turning my DSLR camera & macro lens into a microscope for endodontic treatment
6
What is the best focal length for using a DSLR to digitize film negatives?
4
What kind of lens to photograph a 1 mm object?
4
Can I force the aperture to stay open on macro lens?
2
Magnification percentage meaning
2
What's the difference between a diopter and an extension tube?
2
How to calculate the precision/resolution of a camera
0
Thoughts on using Sigma 18-250mm F3.5-6.3 DC MACRO OS HSM for Macro photography
0
Comparing the amount of light on different sized sensors

10
I have a Canon EF 100mm f/2.8 Macro. How can I get even closer to the subject?
6
How can I calculate magnification ratio I get by reversing a lens?
24
What are the biggest differences between Reversal Rings, Extension Tubes and Macro Lenses?
15
How do zoom, magnification, and focal length relate?
2
How can I take wide angle macro photos with a Nikon APS-C camera?
2
Using closeup filter together with a macro lens
1
Macro - extension tubes vs reversal - how to choose?
2
How to take macro shots with extreme magnification?