How can I seal the sticky rubber on an aging Sigma lens?

I have been gifted an old Sigma lens from around the early 90s, but as is common with the soft-touch rubberised coating on lenses of this age, the material has started to degrade and has become sticky.

As a number of plastic formulae can be carcinogenic when they break down, I'm reluctant to use the lens until I can do something about it.

I have read a lot of information on how to remove the coating, and it seems that isopropyl alcohol will do the trick, so long as it's sufficiently pure.

I have enough 99% IPA to do the job, but this would mean removing all the lining and lettering on the barrel, which I would rather avoid.

As an alternative, I'm considering sealing the material with a transparent layer of varnish, and it has been suggested in a number of threads on various sites that polyurethane might do the job.

Although this has been suggested in many places, nobody has reported back with any detail about their success.

I'd be keen to know if anybody on here has been able to seal the rubberized coatings on a lens with polyurethane or another similar clear coating.

The lens elements themselves are intact and pristine, so I'd like to save the lens if at all possible. I'd expect that a water-based clear coat would be the best solution as anything with a harsh solvent would probably just dissolve the coating further.

As an update, I have resolved the issue with the attitude that I have some excellent optics sitting around unused, and that is simply not good enough.

The plan of using a clear varnish was abandoned as I don't know what effect the solvents in the acrylic clear coat will have on the remaining rubberised coating, and cannot find any information on the specific plastic recipe to confirm this.

As the end goal was to be able to use this lens, I've taken the messy and utilitarian approach of covering it in clear tape.

The degrading coating can't get on my hands or anything else in the camera bag, and the lens works beautifully on my f60.

As I have no intention of selling it and am not bothered by the ragged appearance of it, it's a perfectly usable solution which retains the printing on the barrel and around the aperture ring.

It looks dog rough, but works.

Just bought a pentax SF7 on eBay which came with a sigma 70-200 AF lens with the "sticky" plastic issue.

I tried a few of the usual cleaning agents and found that the only thing that worked well was methylated spirits. I found that isopropyl alcohol didn't have much effect.

Even with the methylated spirits it took a while to remove the gunge, and you need to take care not to allow the solvent getting inside the interior of the lens or on the glass.

The previous owners of lenses, which have rubberized coatings that are degrading into sticky messes, were probably regular users of hand lotions and sun block. Many lotions are petroleum products that act as solvents that gradually dissolve rubberized coatings over years. To avoid the problem, wash hands with soap before using rubberized camera equipment.

Avoid using acetone to clean camera equipment because it would destroy other plastic components and lens coatings, which could make the lens useless. Alcohol seems fairly safe, but doesn't work very well. Since the sticky mess is a non-polar, carbon-based residue, a concentrated degreaser, such as "LA's Totally Awesome", can be used to remove the residue. Follow by wiping down with 70% alcohol, then again with distilled water, to remove any left over chemicals.

If there is any lettering you wish to preserve, you can lightly wipe the area with alcohol to clean it. Then coat with clear nail polish before degreasing. Remove and clean rubber grips separately from the rest of the lens.

When I've used degreaser, it seemed to only affect residues that could be rubbed away or scratched off. Metals, harder plastics, rubber grips, and lens elements did not appear to be harmed in the short term. However, it is prudent to avoid exposing lens coatings to degreaser.

Ok here is what I tried SUCCESSFULLY BTW!! From reading all the posts on this I decided that isopropyl alcohol was much too strong for this venture. My wife and I are resellers of used thrift goods etc. so we have found various remedies for removing markings, writing on packages etc and I tried a method that is a staple for us.

Good old fashioned PURELL Advanced hand sanitizer. The pump gel that is the clear model not the one with aloe. Put a little on a paper towel and take the goo right off. The active ingredient is 70% Ethyl Alcohol so it is perfectly safe for plastics and won’t take off your precious numbers etc. also it dos not fog the index window on the lens either.

Goodluck everyone! This works great I have used it many times 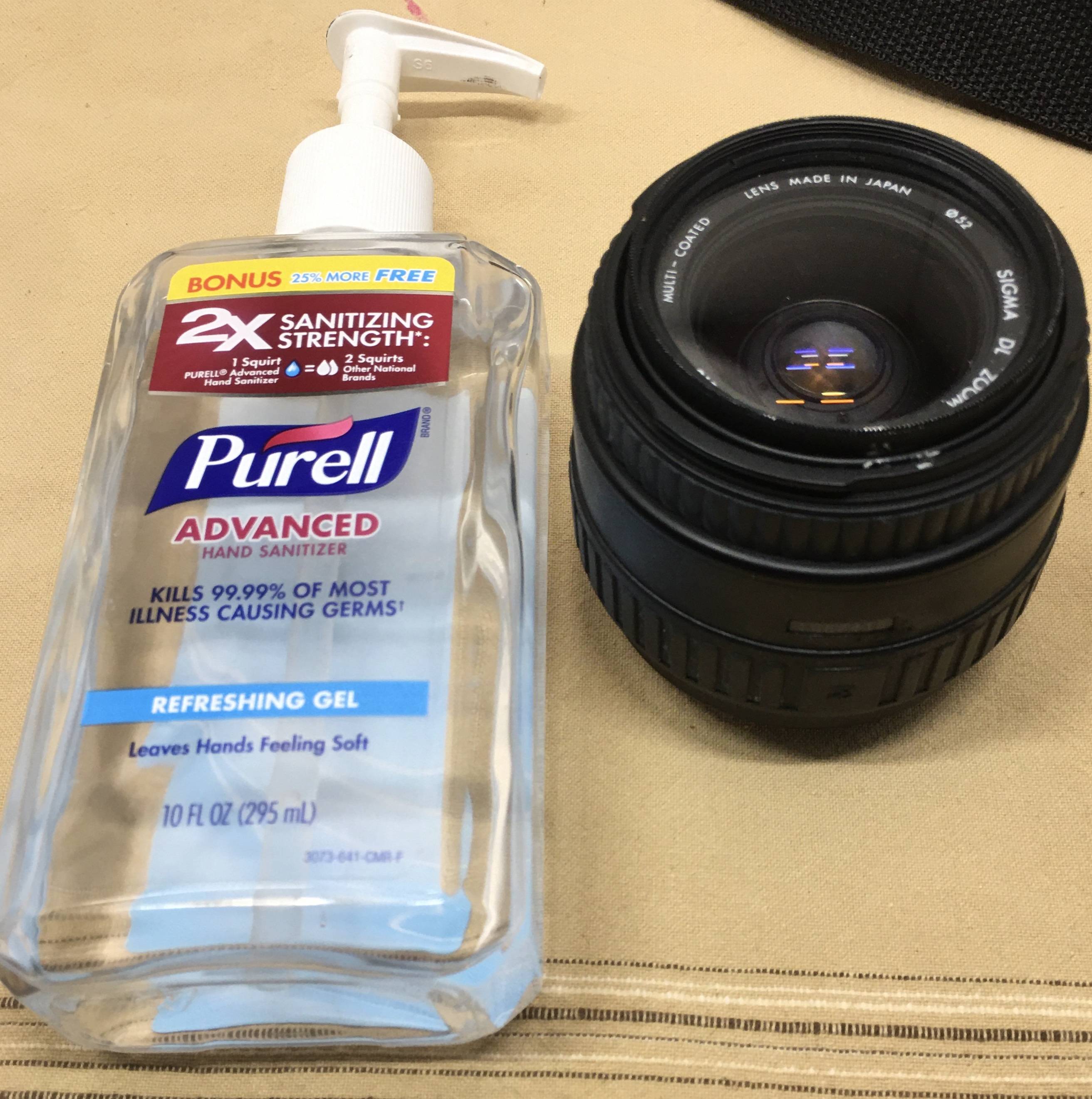 Work in progress, will extend answer... some things might be specific to the 75-300 AF APO I am restoring right now...

At least some Sigma lenses from that era are actually of all metal body construction and have a tidy looking, anodized finish under the sticky soft coating. That coating can be stripped off completely with acetone and paper towels. Avoid getting any acetone on plastic parts or paint you do not want destroyed (eg the focusing scale window) - acetone is even more aggressive than nitro paint thinner. Obviously, you want none on the lens coatings either. The markings will obviously be gone.

If you never handled acetone: Noxious stuff. Flammable. Do not attempt to apply with a synthetic sponge or brush. If you must get any on your hands working with it, grease your hands afterwards.

What remains to be solved is how to deal with or replace the rubber "jackets", since they tend to develop some stickyness too...

That is a great lens! I have dealt with this before. Alcohol is a quick fix, but it is likely to dry it out that will lead to cracks. I've used cornstarch, but that is just a band-aid. Do yourself a favor and get a good camera guy/person. That lens needs an overhaul. It will probably cost about $50 U.S. Once they get gummy like that there is no quick fix. Good luck.

8
Cleaning a sticky DSLR lens
3
Can I replace or repair the rubber wrapper for ease of holding my Rebel T2i?
7
How can I fix a sticky polarizing filter?
2
Why are the rings on my Sigma 28-80mm lens stuck?
1
How to fix a zoom lens that is sticky at a particular focal length?
1
Does the Nikon 50mm 1.8G have a rubber seal?
1
Can I fix inaccurate (sticky!) shutter speed on Canon FTb?
0
AF failure in a Sigma lens, what could it be?
4
What is the effect of lens haze on images?
1
Adhesive to stick the rubber coating on the focus-ring back in place?