Is it possible yet to use off-camera second-curtain-sync with any of Canon's native wireless-radio-flashes?

After searching, I can't find any recent articles on this. Most of the older articles assume it will only be a matter of time before Canon fix their "oversight" to allow off-camera second-curtain-sync. But, nowhere can I find anything to say Canon have actually done so yet — which, admittedly, probably answers my question. Nevertheless, it'd be good to know definitively.

Currently, I'm using one or two Canon EX430 II flashes along with Yongnuo triggers which allows off-camera second-curtain-sync, but it is cumbersome solution — too many batteries, too many on-buttons! Also, the Yongnuos, as good as they are, seem susceptible to radio interference and occasional misfire. Being able to use Canon wireless-radio-flashes would be much less hassle.

Unfortunately, I don’t have information regarding the inclusion of this functionality in the future. 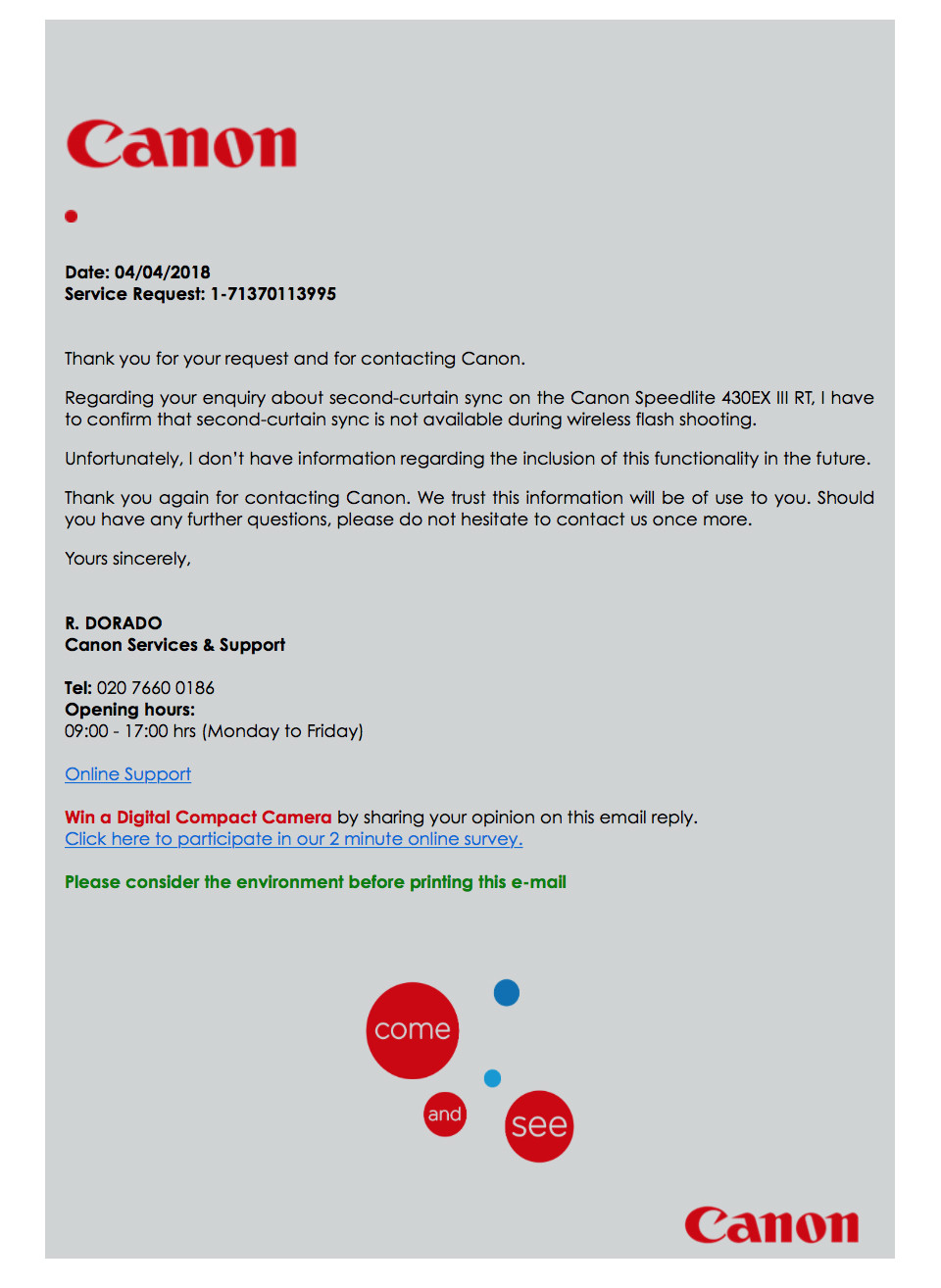 Canon RT flashes and RT triggers will not do what you want. There are 3rd party RT triggers and flashes that will.

The Yongnuo YN600EX-RT and YN-E3-RT, for instance. Unlike your Canon 430EX II flashes, the YN600EX-RT and several other third party flashes have RT receivers built in, so you could eliminate the need for external trigger receivers and the accompanying batteries for each of your flashes.

I've also dumped all of my Yongnuo flashes and replaced them with Flashpoint/Godox products. In my experience the Godox stuff has been very reliable, unlike the Yongnuo flashes.

Not sure why you'd think this picture would change. If you want a built-in radio triggering system that does 2nd curtain, get a Yongnuo flash with a built-in transceiver, or a Godox TT685C/V860IIC and XproC, or Phottix Mitros+ and Odin II or whatever. If you don't like your Yongnuo gear, dump it and move on. And while you'd prefer an OEM system, if the OEM system doesn't do what you want, then you have to settle for 3rd party.

Frankly, this just sounds like complaining that Canon won't do what you want. While it's understandable, it doesn't actually do much good. Canon still hasn't made an EF-S 35mm f/1.8, either, despite all of us crop shooters pointing out how it would be nice if they did, like Nikon has. :)

I'm not familiar with this particular issue and no longer own any Canon bodies or flashes, but unless I misunderstand the situation, it sounds like you have the equipment at hand to very easily answer your own question. Or do I misunderstand? Just set up a shot with motion and a long exposure and attempt to use 2nd curtain sync (wirelessly). And see if it works. Shoot with first curtain and second curtain and verify you see the difference. If you don't see a difference between the two shots (i.e. both are "first curtain"), the issue still exists, right? Otherwise, it's an old issue that's been resolved. Does that make sense?

Not the answer you're looking for? Browse other questions tagged canon flash off-camera-flash wireless-flash second-curtain or ask your own question.

9
Can you enable 2nd curtain when firing off-camera flashes?
28
When should you use a normal flash vs a second-curtain flash?
3
Can any radio flash triggers be used without a sync cable?
3
What gear for Sony off-camera flash sync with TTL?
9
Why is there still a flash before my exposure when using second curtain sync?
1
Is there a workaround for off-camera second-curtain sync with non-Canon flashes?
3
Could I use a manual flash for rear curtain sync?
1
Does the Fuji X100F have an actual "rear curtain" flash sync.?
2
Options for a 5-flash 4-group lighting set-up using Canon (compatible) gear
4
What is the cheapest solution to use rear curtain sync with Canon RT-compatible gear?