I recently purchased an old manual Vivitar Lense (10$!) to play with and cannot identify the mount. I just hacked a plastic body cap and put it on my Canon 450D (EF mount) and cannot get infinity focus nor can I focus farther then about 30 feet. This tells me that my cheapo adapter (about 5mm thick) puts the lens too far out. Identifying the actual mount of the lens would allow me to know the precise flange focal distance and go on from there.

I found this site detailing the lens but being real new to photography cannot find references to T Mount lenses anywhere. It has a small lever on the mount that can control the aperture (presumably from the camera body) 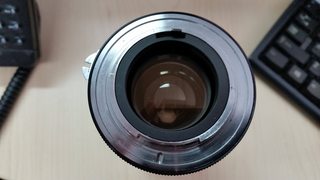 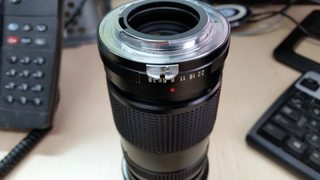 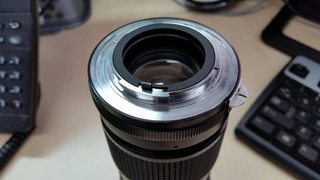 The meter coupling prong is a dead giveaway that it is a Nikon F mount "A" (Pre-AI or non-AI) lens.

Version 6 was produced from 1975-77 and went out of production before Nikon introduced the AI series of lenses in 1979. The AI and later types of Nikon F mount lenses do not have an external coupling prong.

Looks like an older Nikon AI mount. It may have a removable Vivitar T mount where you can swap out the Nikon mount for a Canon one, but I can't tell from the photo.