What kind of lens to photograph a 1 mm object?

I want to photograph an one mm (or slightly less) object. I have a Canon EOS 80D. What lens should I use, or is there any other way to accomplish this?

One cheap option is that you buy a reverse lens adapter.

Of course, you need to take care so you do not let dust inside your camera or let the lens get scratched.

You can also increase the magnification adding a black cardboard tube, for example of 2 inches or 5 cm long.

A cheaper option is using a camera cap as an adapter.

I recommend that you only use electrical insulating tape. This is elastic, and give you a better grip on the irregular shapes and sizes of the lenses and does not leave residues when removing it.

You will need enough light, so probably you need to use a flash, or shoot close to a sun-lighted window. This is especially true if you close your diaphragm to increase the depth of field (But you need a special adapter for that because a kit lens will stay open at max aperture)

This question additionally has one more variable. Can you crop the resulting image?

Here are some tests. Excuse the lack of color calibration.

A reversed lens on extension tubes

I used an old manual Prime lens 50mm f1.8 with an aperture of f8. The camera mounted on a tripod looking down and I used a flash to reduce the motion blur produced by the same camera while moving the mirror.

The lens was reversed with some extension tubes of only 7.5 cm.

The camera has a 24Mpx DX sensor.

The focus was using the live view and moving the pedestal up and down.

The first image a close up of a vernier (precision ruler) to set the scale. 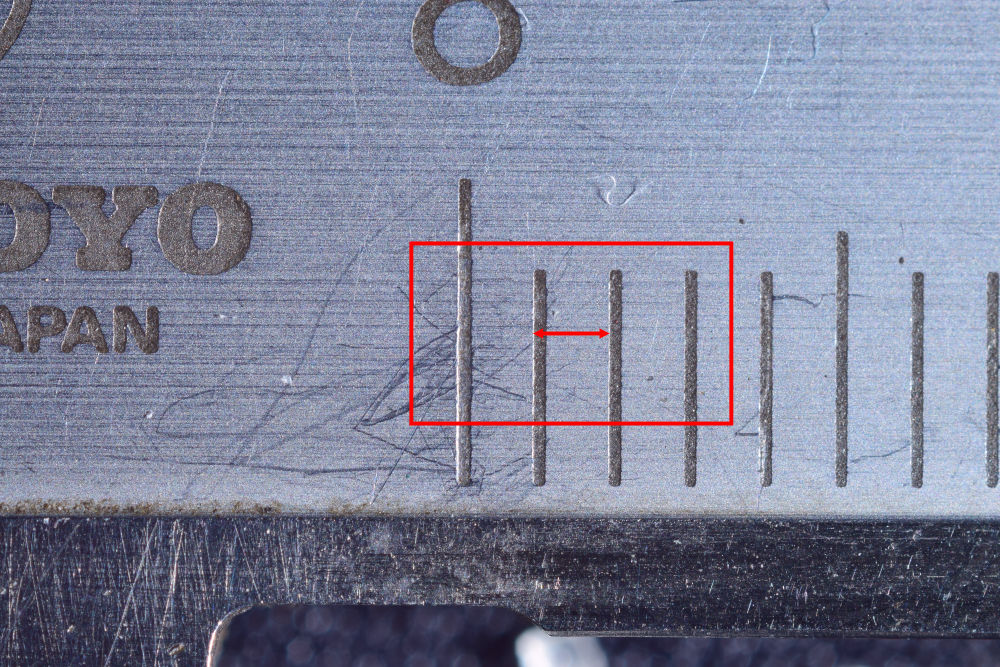 And here are some grains of sugar. Between .5 and 1.5 mm aprox. The red rectangle is a simulation of a FullHD Crop. 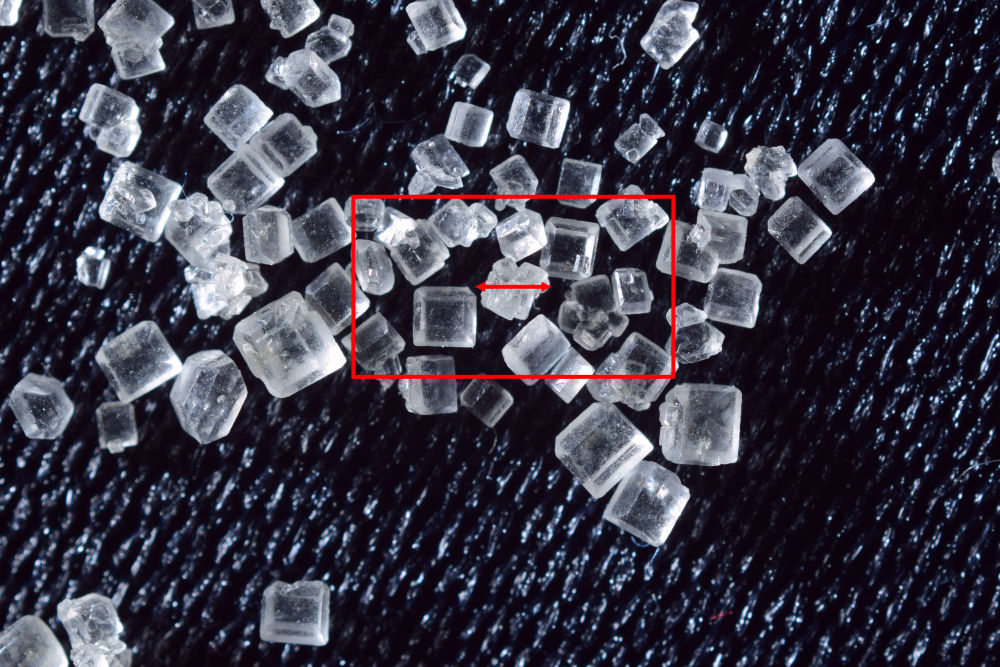 And here is the real size of that FullHD crop. (You can open it in a new window) 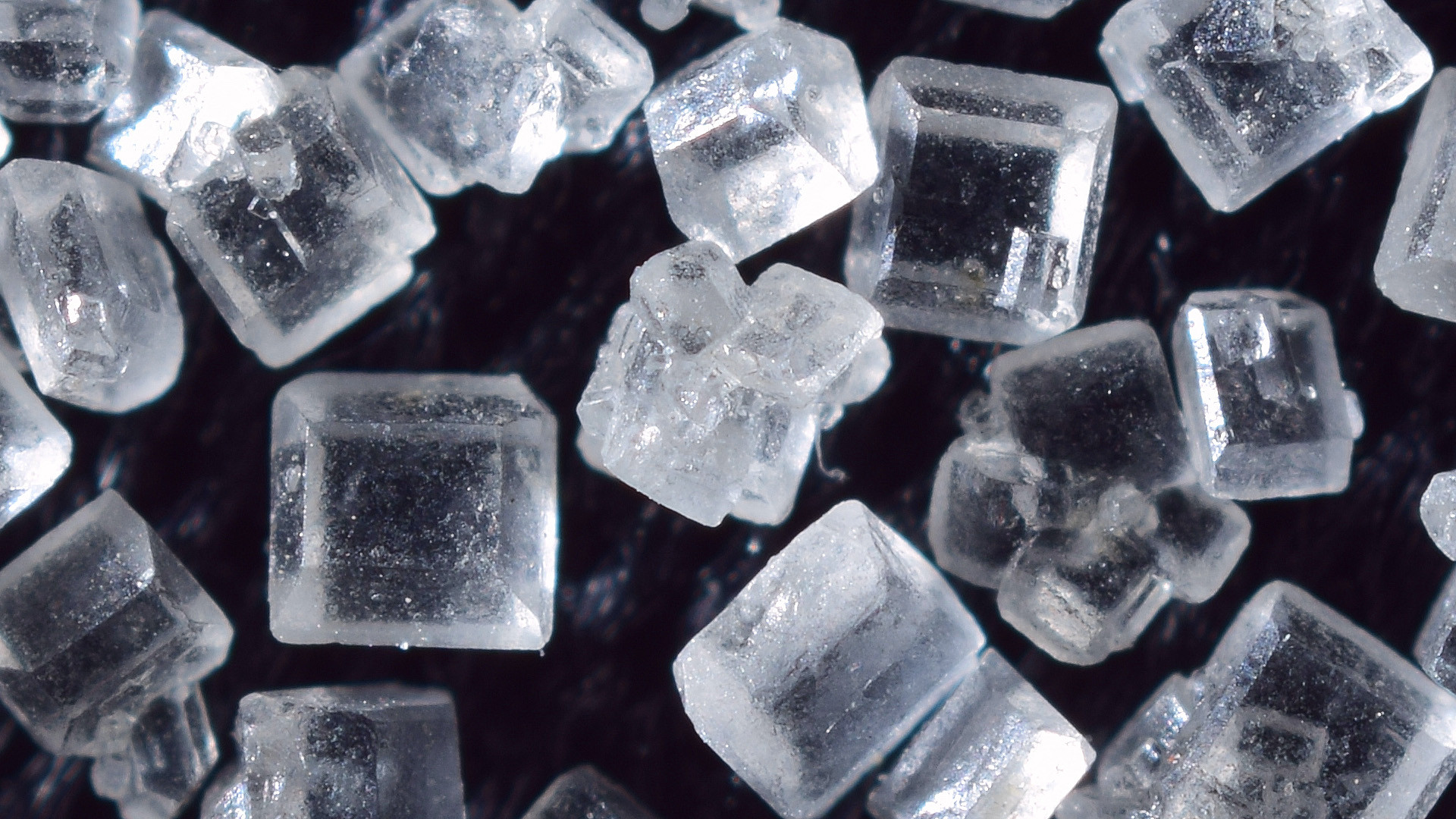 By comparison, here is the cropped (FullHD) image of the kit lens, mounted normally at 55mm the closest possible. I cheated a bit and applied a small sharpening. 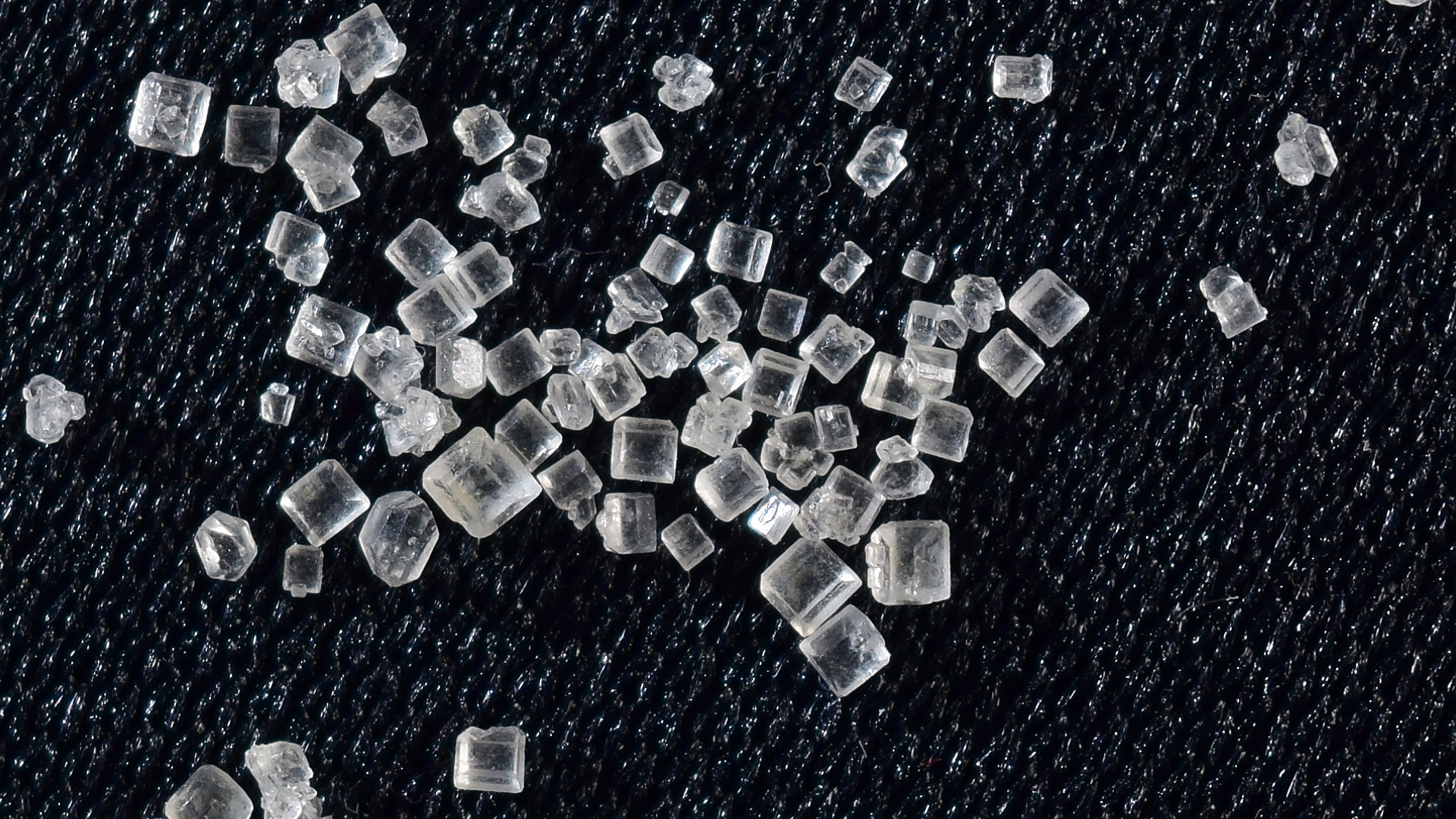 So, to update my answer. Depending on the crop you need even using your normal lens could be an option. Using a reversed lens is a good option to experiment with macro photography.

You can try to get one prime lens of let's say 35mm, a reverse ring, and some extension tubes.

One interesting thing about the reversed lens is that for example using the kit lens at 55mm gives a lot less magnification than using the 18mm side. You probably do not need an extension tube at all at 18mm.

Reversed lens over a telephoto lens

You need to be extra careful with this setup, put your mounted lens on manual to prevent any damage. Keep the arrange in a vertical position to prevent any bending.

Here are some new tests using a zoom lens at the 200mm range with an old manual 50mm f1.8 lens on top of it.

The new reference photo on green, and the old one in red. 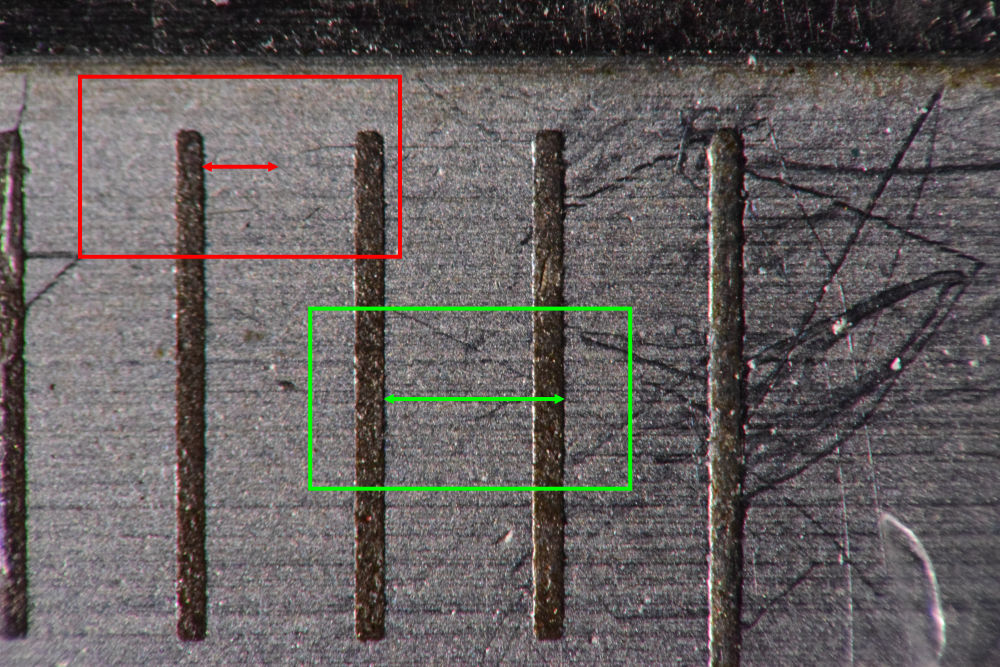 The full framing and the reference FullHD Crop. 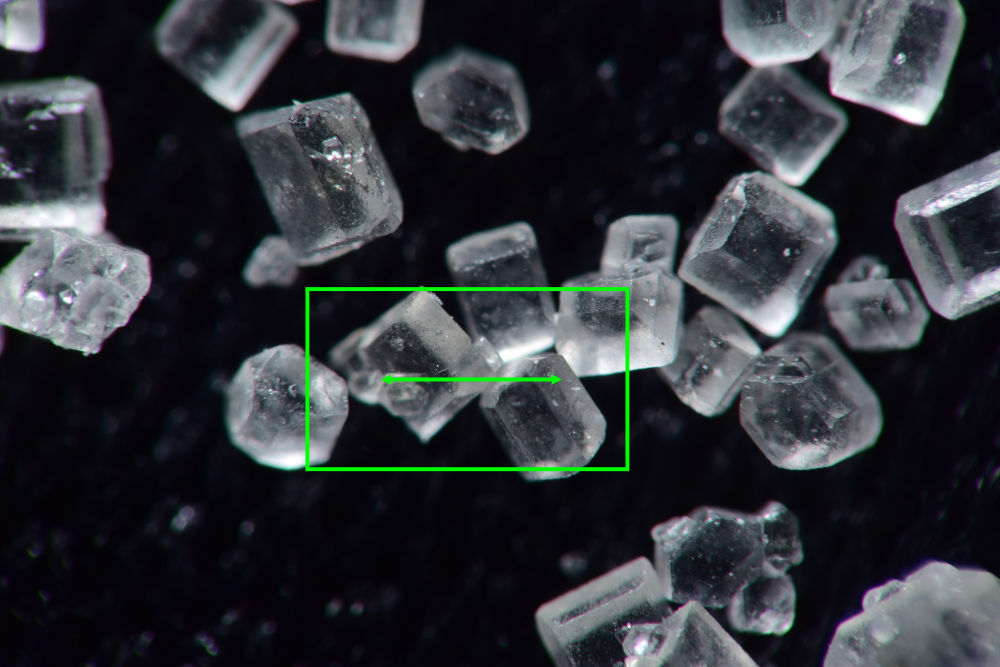 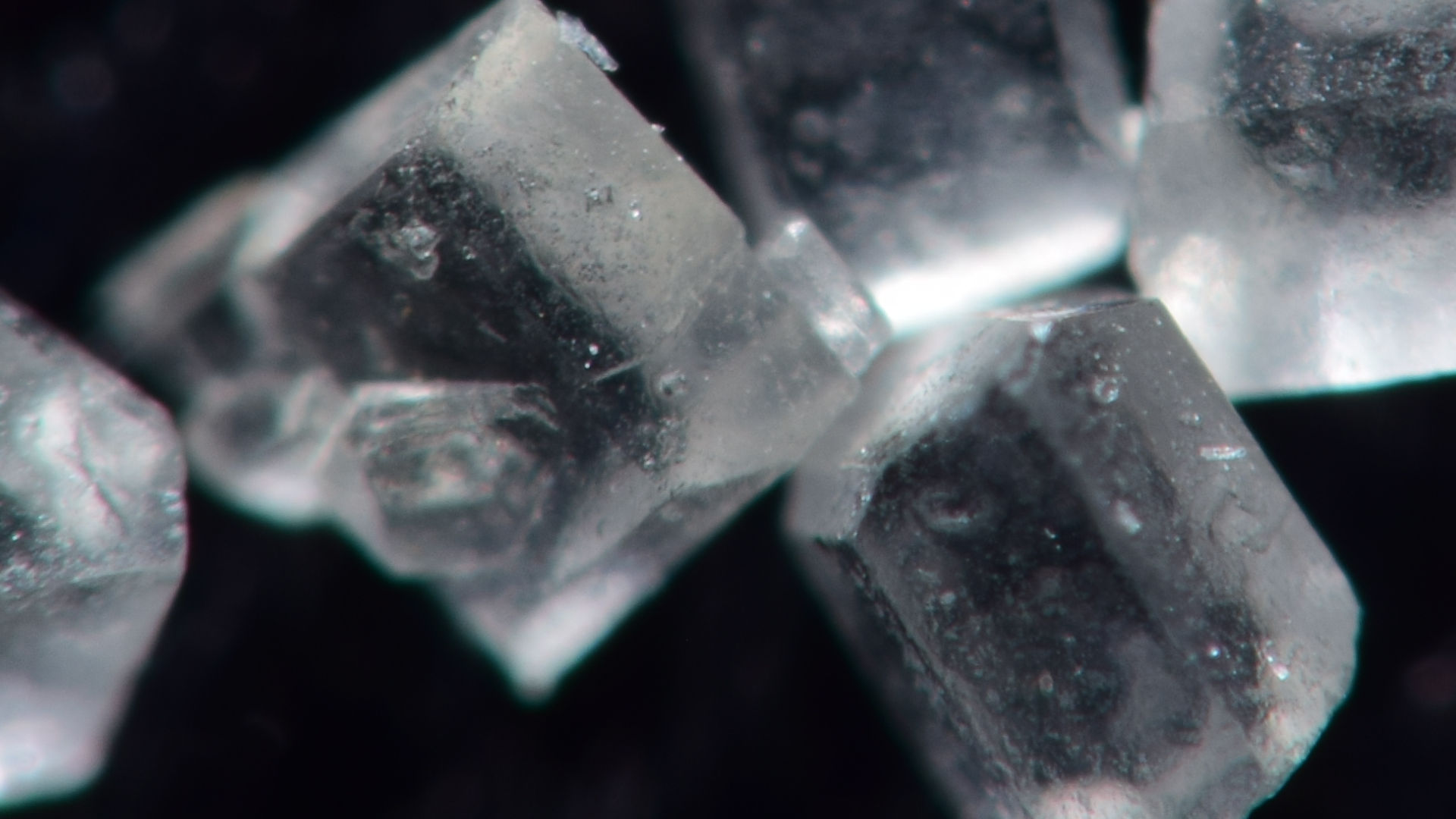 Aditional notes. It is really hard to keep something in focus at this macro settings. I used f32 on the mounted lens, and obviously, it got really dark. I used the flash really close to the subject.

Resampled but no crop. 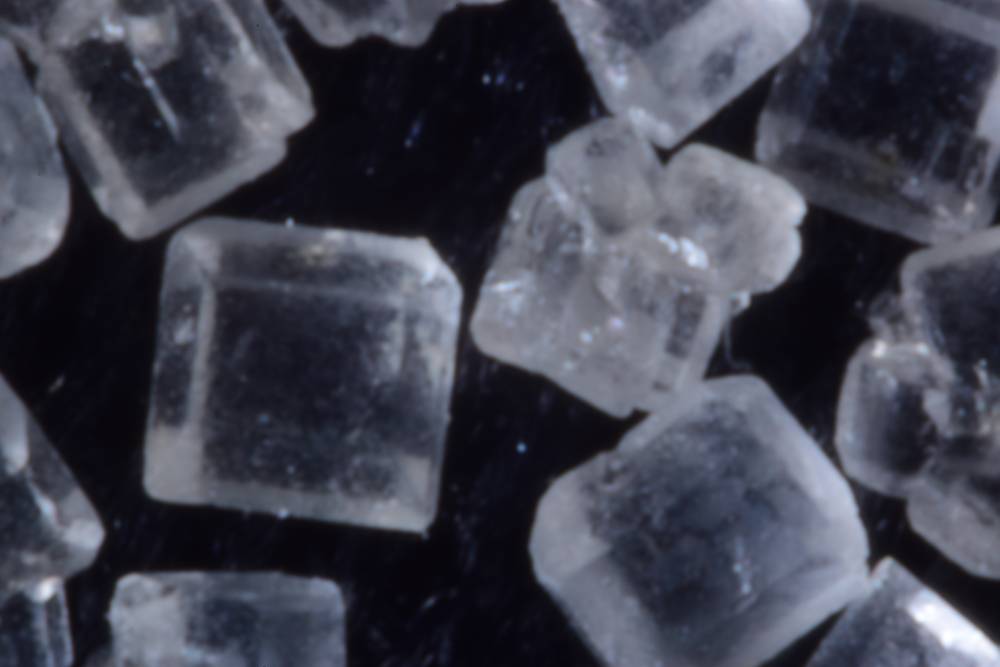 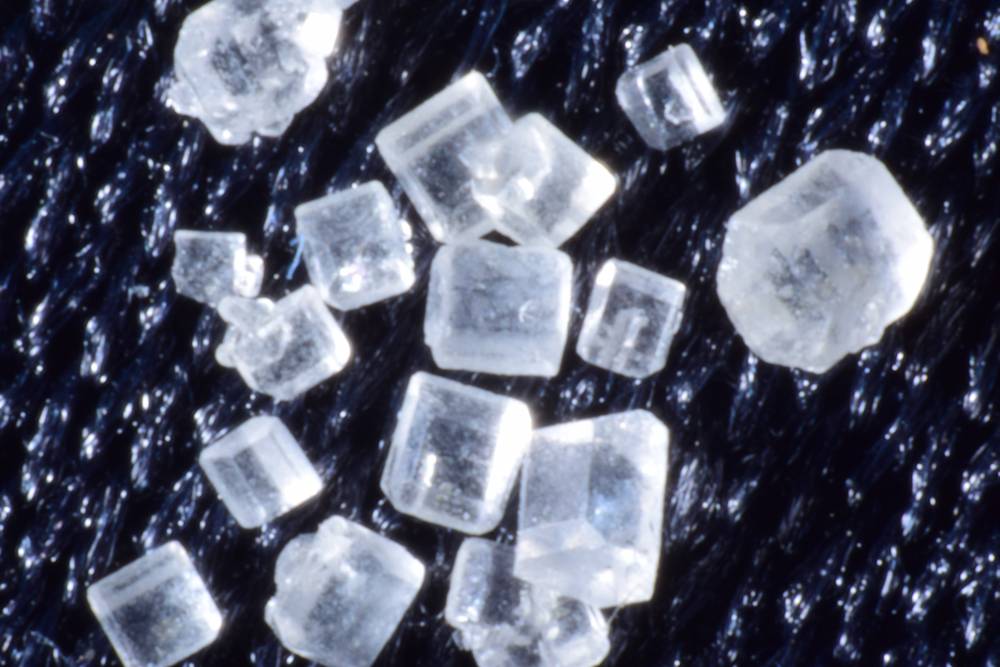 Most kit lenses have only a maximum magnification of 1:3 or 1/3 life size on the image sensor.

Dedicated "Macro" lenses have a maximum magnification of 1:1 or "Life Size" on the image sensor.

Specialized Marco lenses like the Canon MP-E 65mm 1-5x Macro Lens have a maximum magnification of 5:1 or 5 times "Life Size" on the image sensor.

At 5x magnification the depth of field is VERY narrow. Unless you are photographing a flat subject, you will need to take multiple images and use "Focus Stacking" software to get the entire subject in focus.

For more information see: How do zoom, magnification, and focal length relate?

Your Canon 80D has a 22.5mm x 15mm image sensor and here is an approximation of what a 1mm subject might look like in your photos at various magnifications: 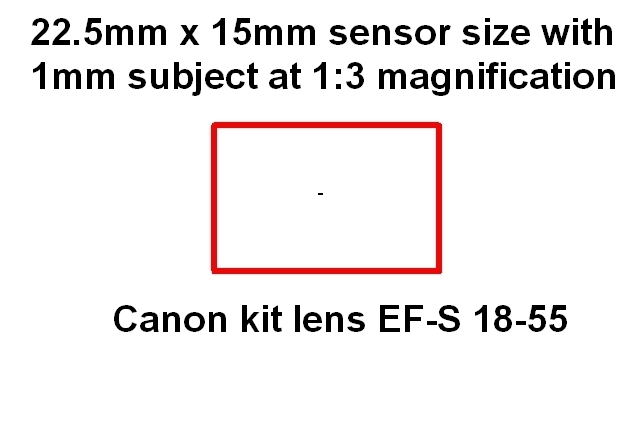 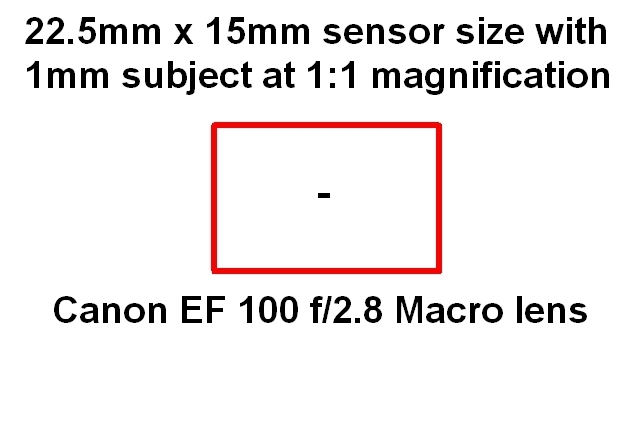 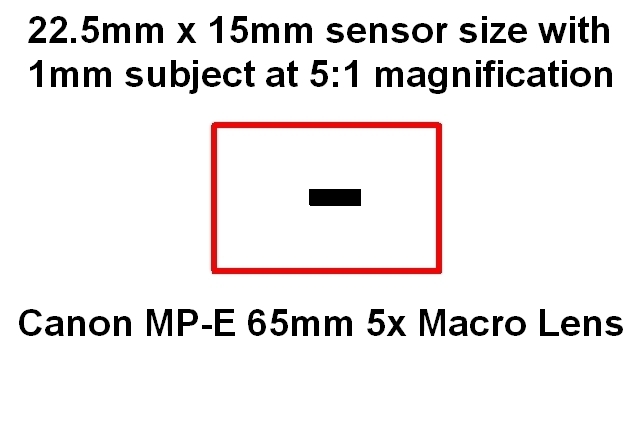 To image a 1mm object, you will need a lash-up that will deliver a magnified view. We are talking about perhaps a magnification of 10X. To accomplish, you will need to mount a bellows attachment. The idea is somehow to space the lens several focal lengths forward of its normal position. We normally use what are called tubes. Tubes are neat because some of the high-end ones will maintain the electrical connections between lens and camera body. Such a lash-up upholds the automation your camera provides. A bellows attachment severs these connections forcing you to operate totally manually, however it will deliver the needed extra magnification.

Because of the pitfalls of operating manually, I suggest you first try “afocal” photography. You procure a microscope that delivers low power. These are commonly called dissecting microscopes. You place the subject on the microscope stage and focus in at 10X power. Now you substitute your camera for your eye. In other words, you are imaging through the microscope. No accessories or changes to your camera are required. Your camera with its lens will work just fine, and all the camera’s automation will be available to you.

That kind of object size is getting rather small for the standard photography equipment, you'd need a 5-10× magnification to get a decent image. That kind of magnifications has a certain number of difficulties:

This website deals with this kind of photography. It shows various techniques and some of the equipment that's used.

Edit: as mentioned by @MichealClark, Canon does make a 1-5× macro lens which gets you to the magnification you'll need. You'll still need some equipment to position your camera precisely relative to your subject, and ideally allow focus stacking. You'll also have to take precautions against vibration, the slightest movement of either camera or subject will be visible in the image.

Not the answer you're looking for? Browse other questions tagged lens equipment-recommendation macro or ask your own question.

18
How can I take a macro shot without a macro lens?
7
Turning my DSLR camera & macro lens into a microscope for endodontic treatment
9
What does "magnification" mean?
15
How do zoom, magnification, and focal length relate?
1
Would it be viable to use my camera as a low power microscope?
2
Reverse macro with 2 lenses
2
What can I expect with stacked lenses for extreme macro photography?
0
Thoughts on using Sigma 18-250mm F3.5-6.3 DC MACRO OS HSM for Macro photography
0
Is it possible to turn a Nikon 18-200mm lens to a macro lens?
1
macro photography with rings and reverse lens
See more linked questions

1
What object is typically used to illustrate size of object on a photograph taken in the field?
4
What is the best techniques to photograph large rugs?
3
Which focal length should be 'always on' for a wedding?
0
Visiting Iceland, photographic equipment review what do I need to replace?
0
Long object photography
2
What should I expect from Canon EF 24-70mm f/2.8L II USM?
3
Canon EOS 800D vs 80D | Which one is better for macro photography?
3
What kind of lighting gear should I consider for macro shooting?