How do you get the eyes extremely sharp in the photo?

I am trying to take pictures of my son (2.5yrs) and my other family members. They come out pretty well and sharp but when I see the portraits posted on Flickr and other sites, I have noticed that many of them have extremely sharp eyes. The eyes are the highlight of those pictures.. even in the kids pictures. I am never able to take pictures with eyes so extremely sharp.

Are they doing something different in the pictures or may be post processing? Not sure. I would love to know how to do that.

No one has mentioned lighting yet: bright pixels are sharp pixels. Are you using an off-camera flash, exposing the subject and background properly, and capturing one round catch light in each eye? 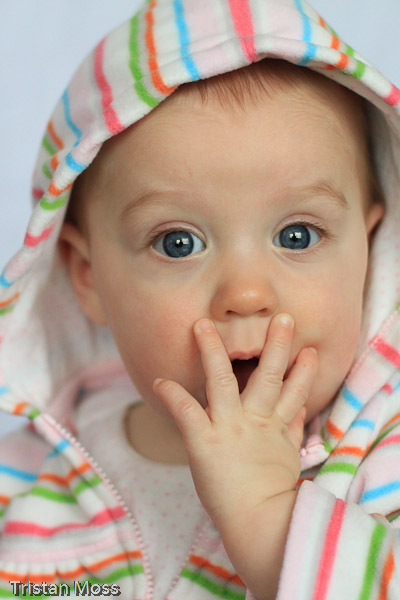 If this is the kind of thing you are going for:

(This is largely a summary of what people have said above, so I upvoted those who already said these things).

Looking at the images you posted, the focus is not on the eyes. The two images are really not that sharp in general. Who knows what the AF selected, but it wasn't the eyes unfortunately. You need to do two things

1) When taking the shot, use a center focus point, focus on the eyes, then reframe and shoot. I would suggest taking several shots to improve your chances of a nice sharp image.

2) In post processing, you can sharpen the eyes further (either careful use of a sharpening tool, or add a sharpening layer and a mask so that sharpening is selectively applied to the eyes, eyebrows, lips. )

As Matt Grum stated, sharpness is often a relative thing. I think a lot of really good head and shoulders portraiture is done with a very narrow DOF, so that focus blurs quickly as you move away from the front of the face.

That said, you can control exactly what is in focus if you wish. Auto focus is by default performed by testing multiple focus points, which can nail focus on "the face" as a whole, however it won't do so well if you need to focus on one small part of someones face, such as your son's eyes. You can take more control by explicitly selecting a single AF point, and by using "focus and recompose".

Its best to use the center focus point, as it is usually a cross-type focus point that can detect sharpness in multiple planes (usually horizontal and vertical, however some use the complimentary oblique diagonal planes). If you have the option, reconfiguring your camera to separate the AF trigger from the shutter button can also help. You can often redirect AF control to a button on the back of the camera, so it can be triggered independently of the shutter and meter. Place the selected AF point on an eye, find and lock focus, then recompose the scene the way you want it, and meter & expose with the shutter button. (If you do not have the option of separating your AF control from your shutter button, just depress the shutter half way when focusing, keep it half-depressed while recomposing, then fully depress when you are ready to take the shot.)

Many have not only been sharpened, but had the brightness and saturation "enhanced" as well. These don't increase sharpness, but can draw much more attention to the eyes.
- Jerry Coffin

Sharpness is a factor of two things: contrast and acutance. Contrast itself can be a factor of two things: difference in brightness, and difference in color. Bright and dark areas of an image next to each other will create contrast, and at a fine resolution, can create sharpness. Complementary colors will also create contrast in their own right, even if they are the same brightness. Acutance is the harshness of edges, and is usually the way we adjust sharpness in our images during post-processing...by adding acutance along fine edges.

Even without sharpening, you can enhance apparent sharpness by enhancing the color of your photos. This is usually done by boosting saturation, or, if you have it, vibrancy.

Sharpness can be a relative thing, if you use a wide aperture to get a shallow depth of field, the eyes will seem much sharper if everything else is blurred so you could try that, although it only really works with single subjects if the DoF is very thin.

I suspect the most eye-popping (pun intended) images on flickr have been sharpened in photoshop. They might have applied extra sharpening just to the eyes.

My first bit of advice would be to get closer. These pictures have a lot of space around the subject. That's not necessarily bad, but if you really want to bring out the eyes, making them a larger part of the picture is a good first step. Finally, I'd mention lighting: light from above tends to leave eyes in shadow which tends to hide them. You just about need light at eye level to really show the eyes well. You want it off the camera though. If the light comes directly from the camera, all the texture is hidden. A large light source from somewhat off camera show a great deal more texture, increasing the apparent sharpness.

Just for fun, I did a bit of editing on one of your pictures. First, I cropped it a bit tighter. Second, I spent five minutes or so on one eye, but left her other eye alone, for easy comparison. None of it was done with a sharpening filter though -- the changes I made were all to things like brightness, saturation, etc. Her cheeks do look a bit posterized, but that was already the case. 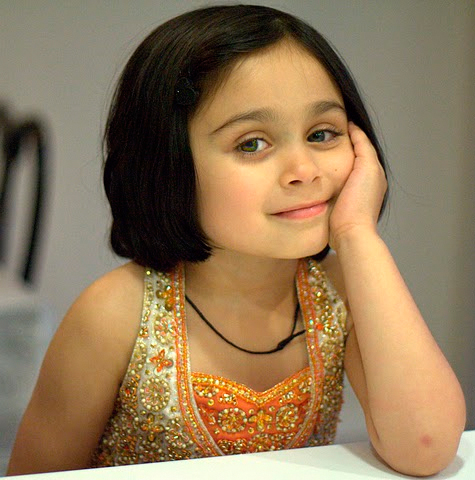 I've done some editing on your photo. Maybe it's more extreme as it should be but I wanted to point out what can be done in post processing in software like Photoshop.

Except for the marks on her left forearm and a tiny spot on her cheek. 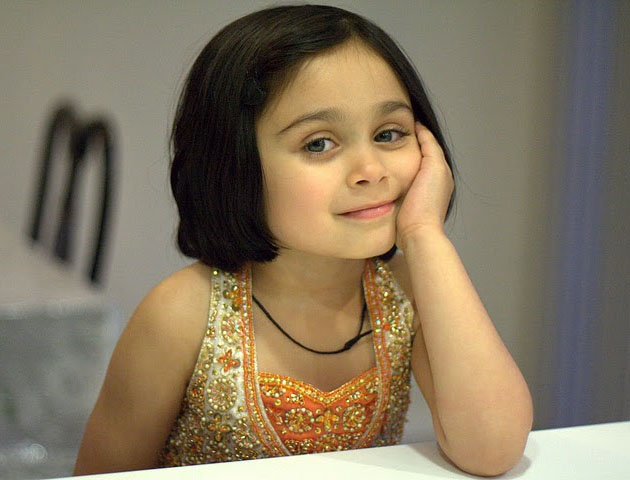 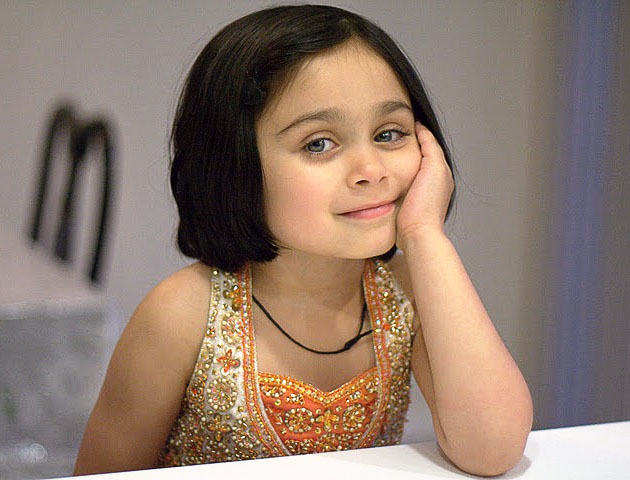 What has been done?

I hope this helps tweaking your images.

Everyone's free to comment on my editing of course. Any input is always welcome!

The other image (posted by @Tristan Moss) is a much better example for eye sharpness manipulation because it really requires just a tiny bit of work. The image is for my taste a bit underexposed, so I adjusted exposure. But the best part is that eyes can really be edited to extreme sharpness that actually pop out razor sharp (you can see both images here side by side for comparison). 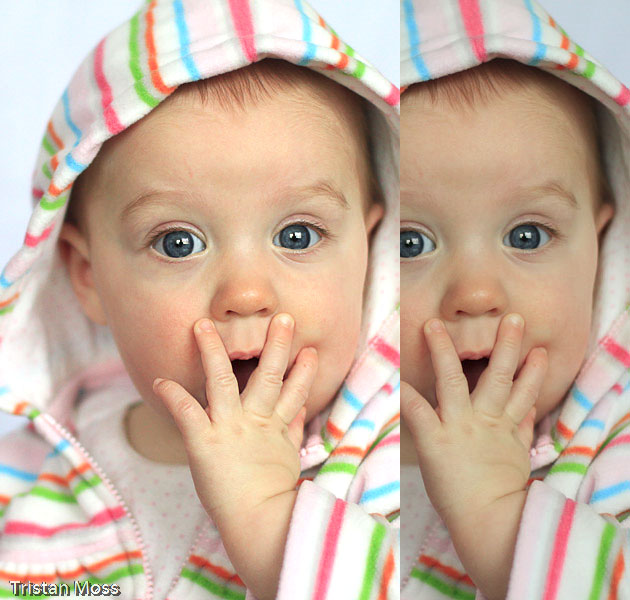 Don't focus, then reframe. Focus on the eyes using the center focus point, then shoot and crop in post. If you reframe, the focus will be off.

You have prime lens, which is the first step towards the results you want to achieve.

1) You need to make sure your subject is well lit when taking portraits. Catch light (a bright spot in the eye) is a must if you want the eyes to look beautiful and full of life. Have you ever seen a moment when you looked at somebody eyes in real life and saw them pop and look extra bright because of the way the light was hitting the eyes? If you didn't, you need to start observing.

Both natural (window) light and artificial (flash) light can give you good results as long as the position is chosen right.

With window it's very simple, just position your son as close as possible to a window and make sure he is facing it or at least half-facing it.

2) Make sure you focus on the eyes, not somewhere on the face, but exactly on the eyes.

4) Make sure you don't go below 1/50sec, unless you have a very stable hand and your son doesn't move for a moment.

5) Post processing is another must. You need to select irises and play with Levels, especially highlight level should be increased. Also you can increase sharpness and contrast by doing a bit of dodging and burning on the irises. Don't forget to sharpen the eyes in the end.

6) As you don't have an off camera flash, better if you stick to using natural light to take portraits of your son :)

Here are two examples of portraits I took using window light, first two shots where taken indoors, third one was taken outside and there was a silver reflector on the right hand side just out of the frame to bounce the light on the subject:

P.S. Without post processing those eyes wouldn't look the way they are ;) 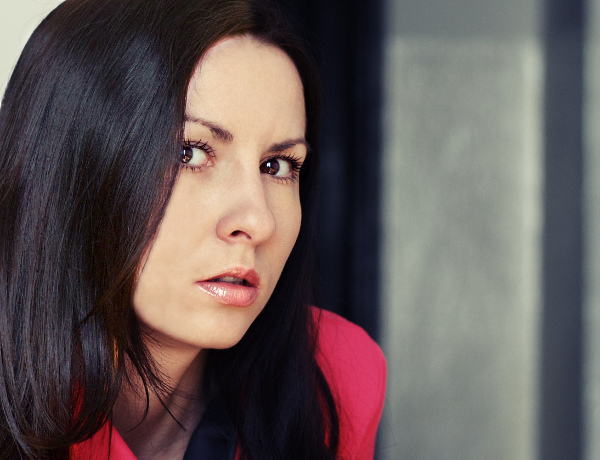 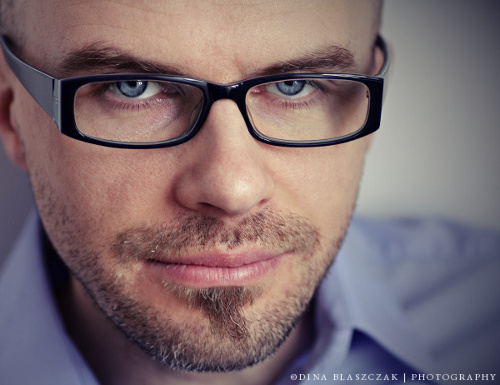 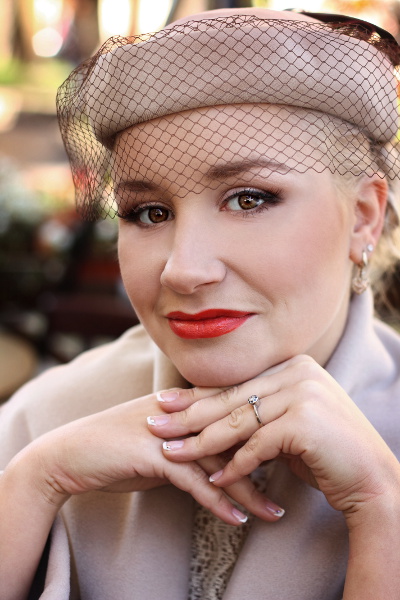 You should also consider the following mechanical factors which could be causing unsharp photos:

1) subject movement, I am thinking of your young son in particular and your shutter speed might be too low.

2) camera movement, your hand holding technique might not be ideal and the shutter speed might be low.

3) inaccurate auto-focus, this is quite common and becomes readily apparent with shallow depth of field at large apertures.

You can test for these issues as follows:
a) take photos with your flash on. This will freeze hand and subject movement. If it is still unsharp you may have an auto-focus problem.
b) take photos with camera tripod mounted to test whether hand movement is causing the problem.
c) take photos of a focusing chart to determine if your auto-focus is accurate.

A final note about camera movement. People often sway slightly forward and backward while composing the photo. In particular you might sway slightly after you have acquired focus lock. With the shallow depth of field at large apertures this can play havoc with the focusing. I say this with feeling because some of my photos have been ruined in this way.

If your camera allows you to select the focus point, then focus for the eye, not just the face, or to the person. That should give you a crisp sharp eye.

I second the suggestion to improve the light. In your second photo, there is very little difference between the dark brown iris and the black pupil. You could try to bring them up in post, but you really want to get more light on the eyes when you press the shutter.

The other suggestion I have, which may not be relevant, is to stop your lens down. I can't see what your aperture was, but lenses are almost always softer when the aperture is wide open. I like to shoot around ƒ4, which I find is a good compromise between speed and sharpness. If you’re shooting wide open (or close to it), you will lose a lot of sharpness.

Not the answer you're looking for? Browse other questions tagged portrait people or ask your own question.

3
How do I achieve this very bright and clear portrait look?
1
Why are some portraits so sharp and others not

77
How can I get my portrait subjects to look natural and drop the cheesy smile?
19
What is a great portrait lens for Nikon (under $1000)?
7
How do I get a portrait with sharp, sparkling, high-contrast eyes as in this example?
12
What lenses to bring while traveling? One good wide-telephoto or several smaller ones?
4
Compositing portrait adult/child
2
Location for Family Portraits
1
How can I get tack-sharp portraits with the focus perfectly on my subject's eye?
0
Which Canon 70-200mm is best for a wildlife trip?
1
How do I chose a lens for portraits which will also be useful in other situations?
8
Corporate Portraiture Advice