I was taking photos of snow sculptures at night, and I noticed something strange on my Olympus O-MD E-M10 Mark II. 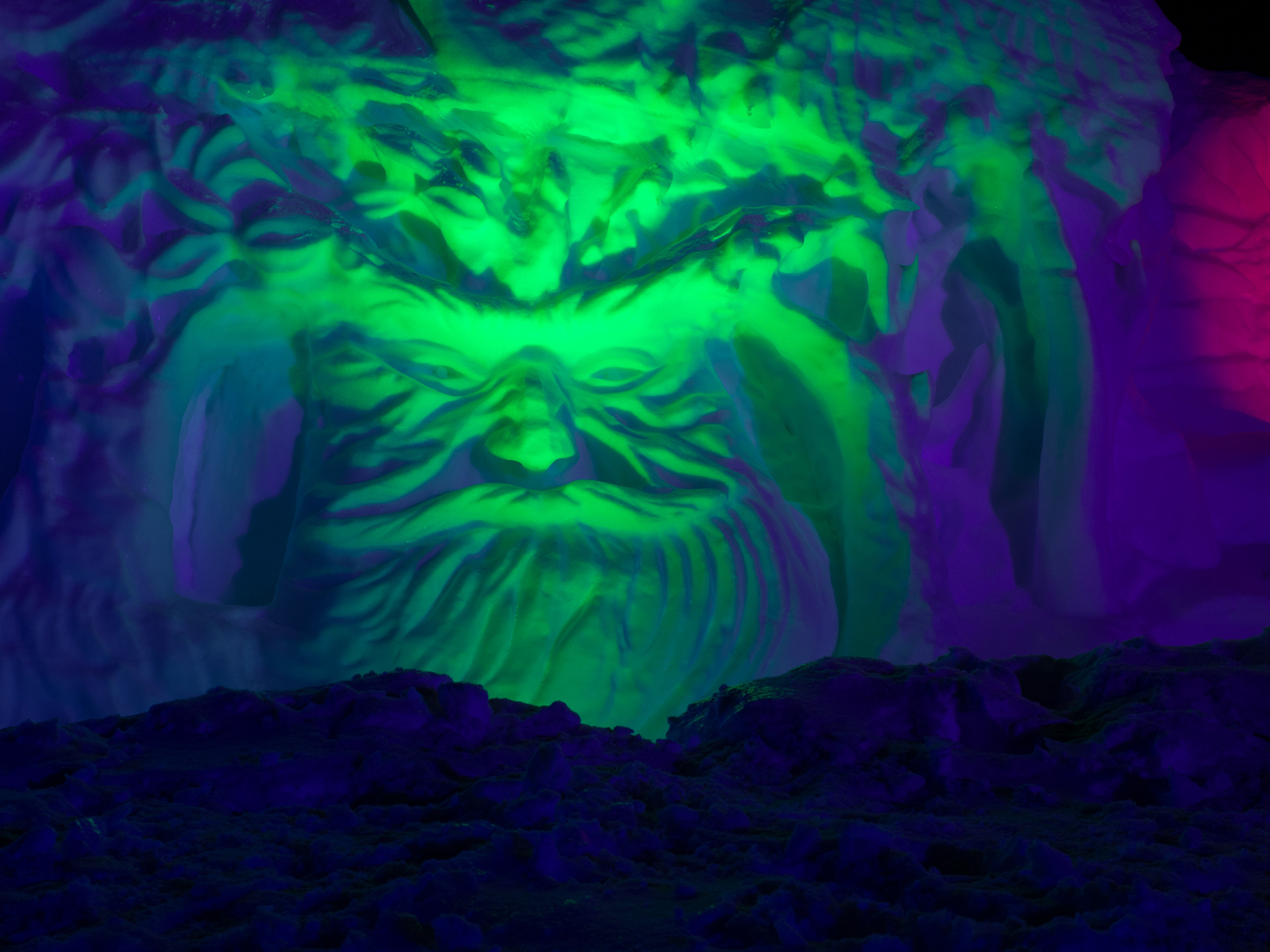 when the green channel gets blown, turns blue 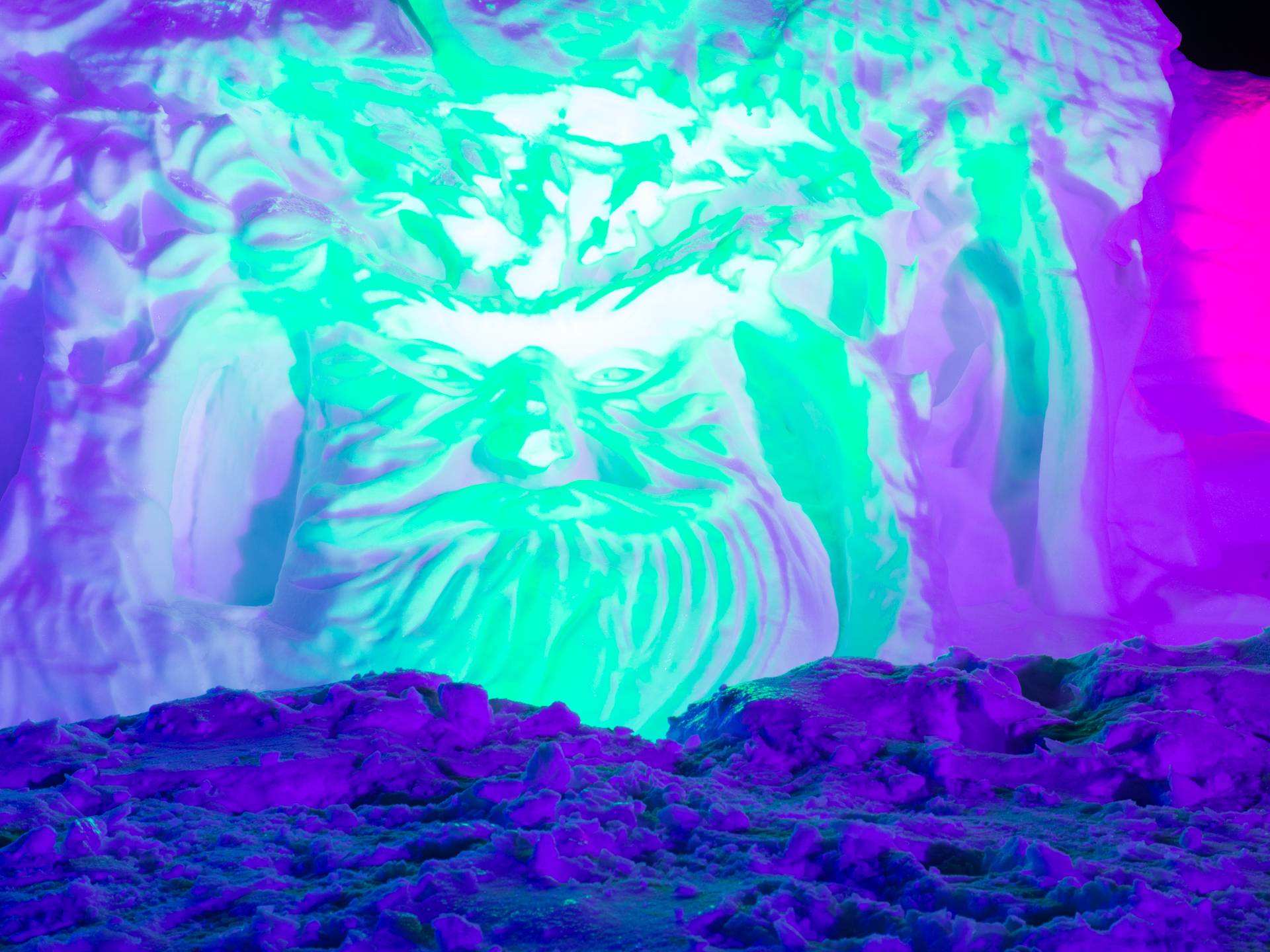 and then eventually turns white.

Why would the green channel clip this way?

The light you describe as "green" also contains components of "red" and "blue" light. They are much weaker than the green component, but they are there.

Increasing the exposure further does increase the value recorded in the red and blue channels until exposure reaches a point for each where they too are fully saturated. Look at it this way: if there is 10X as much green as blue reflected by your sculpture, exposing ten times brighter than needed to fully saturate the green channel will result in fully saturating both the green and the blue channels. The camera will have no way of showing that green is 10X brighter than blue. It will show both channels at the same value: 100%.

When all three channels are fully saturated we get pure white. It matters not that there is much more green than red or blue light striking the sensor. As long as there is at least just enough of each color to fully saturate each color channel we will see that area rendered as white.

The blue line shows what percentage of light along the entire visible spectrum is counted by the blue-filtered sensels of the Sony IMX249 sensor. The green and red lines show the same for green and red filtered sensels. Notice that above about 820nm all three are more or less equally sensitive. That is why digital sensors have an IR filter in the sensor stack. Also notice that the response of the red and green filtered sensels begins to increase as the wavelength moves below 420nm, which is why a UV filter is also included in the sensor stack.

So even if the light illuminating your sculpture was pure green, some of that light would get through the red and blue filters on your camera's sensor and be registered by the "red" and "blue" pixel wells. Overexpose bright enough and you will fully saturate all three channels.

That we can see blue objects through red filter doesn't necessarily imply that the filter passes significant amount of blue. It may just mean that the blue object has significant reflection in the red part of spectrum. E.g. #3f00ff color is also blue, but has non-negligible red component.

Regardless of the wavelength, light that passes through the red filter is included in the single monochromatic luminance value for the red filtered pixels. It matters not if the light is red, green, or blue - the photons allowed to pass into that sensel (pixel well) are all recorded the same. It's just that a higher percentage of the red light that falls on a red filter is allowed through than the percentage of blue light that falls on a red filter. But what gets through is counted as photons, not red photons or blue photons or green photons.

Actually, it turns towards magenta. Look more closely at your picture.

When green clips and the other two channels (red, blue) don't, the result is basically lowering green. Lowering green has the same effect on hue as raising red and blue. Red+blue is magenta, so lowering green by itself makes the hue more magenta.

Not the answer you're looking for? Browse other questions tagged night overexposure highlights or ask your own question.

19
RAW files store 3 colors per pixel, or only one?
7
Why does BRIGHT red in direct sun come out orange?
4
What is a blown out background?
5
What does it mean when color channels clip?
3
RAW to TIFF or PSD 16bit loses color depth
1
Why is an overexposured-area white?
1
Is it true that a camera sensor will never receive an RGB value of R 0 G 255 B 0?
0
How to know correct exposure for RAW shooting when camera show JPEG Histogram

6
How to improve the colour of night time sky?
2
Why are minor differences appear magnified when synced to the same parameters in Lightroom?
3
Improving My Night Photography Shot with Post-Processing
4
How to keep burnt-out regions from becoming strongly blue and purple in Rawtherapee?
2
Why do I never see HDR done with nighttime photography when the moon is in the frame?
3
Why the lights of that photo are too much blue/white in the edges?