In some tools, like Photoshop, the white balance adjustment is two sliders: tint and temperature.

In many cameras however, a 2D grid is used with one axis being magenta-green, and the other blue-amber like this: 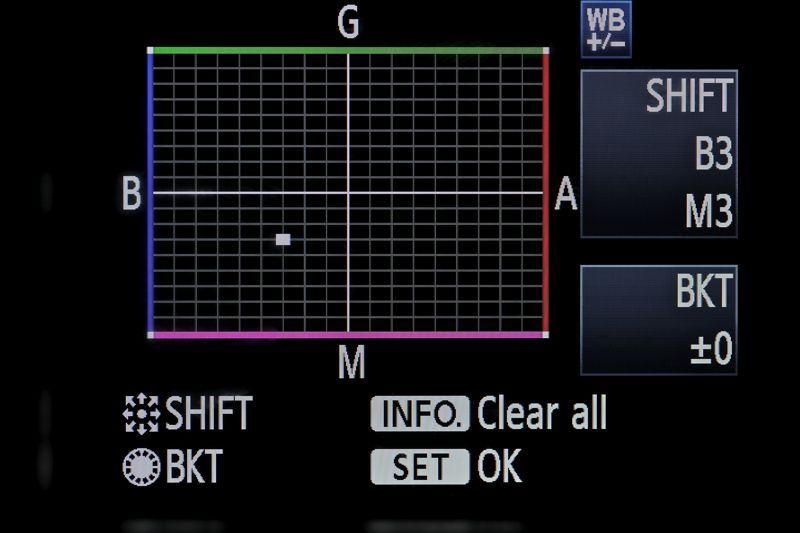 Tint is the green-magenta axis, temperature is the blue-amber axis.

Setting a lower color temperature (as in: less Kelvin) results in a blue picture, while setting a higher temperature enhances the amber-tones. Setting a negative tint will make the picture greenish, while a positive set tint will create a magenta-looking picture.

I can offer two examples to prove that: a look at Lightroom's White Balance sliders and a screencapture of a hands-on experiment.

Lightroom's sliders - as an example for almost all RAW editors I know of - show the estimated impact of their movement:

For visualisation of the effect, I made a screencapture while adjusting bith sliders in Capture One. Although the colours are quite blocky, the GIF visualizes what's what.

Capture One's Kelvin-slider works the same way as Lightroom's Temp, and Tint...well, it is the same as in Lightroom. I also included an RGB histogram - and the levels for each channel.

For everyone interested: The picture you see was taken in a studio with Hensel flashes (and softboxes), a white backdrop, and my 5D Mk III - the colorchecker was just lying around there, so why not use it? In this case, it even created some additional privacy for the model. ;-) 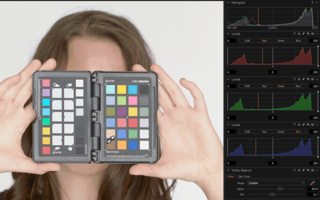 Click the image to see the full-version of GIF animation (13.2MB) or alternatively, link to the MP4 version

When cameras have a built-in WB color correction setting, such as the one that is illustrated in the question which is included in Canon cameras, the full extent of the maximum adjustment is much smaller than the full range of the in-camera Color Temperature adjustment as well as the CT and Tint adjustments provided by raw converter applications such as Photoshop.

Some raw processing applications, such as Canon's Digital Photo Professional 4, include the same fine adjustment tool as provided in many cameras (with gradations 1/10 as fine as each in-camera unit). This tool allows for more convenient very fine adjustments along each axis than the CT and Tint adjustments. It also allows the application, when opening a raw file, to automatically apply and display the in-camera settings for WB correction at the time the photo was taken.

With Canon cameras, which is the source of the illustration in the question, each unit of adjustment along the Blue←→Amber axis in white balance correction is equivalent to a five mired color correction filter. The fullest value allowed, nine units, would thus be equal to 45 mireds. This is roughly equal to about 1/3 the correction provided by a full CTO (+137 mireds/orange) or CTB (-137 mireds/blue) color correction filter. 45 mireds is a fairly small distance along the entire Blue←→Amber Color Temperature axis. The difference between 2,000K and 10,000K is 400 mireds.

Technically speaking, the mired scale is strictly along the Blue←→Amber color temperature axis because the units are defined using reciprocals of values expressed in degrees Kelvin.¹ Although Canon does not specify the value of each unit along the Green←→Magenta axis in the in-camera White Balance Correction setting, one would assume it is based on the same amount of perceptual difference along that axis as the 5 mireds of adjustment per unit provides along the Blue←→Amber axis.

What, you ask, is a mired? From Wikipedia's Mired entry:

Contracted from the term micro reciprocal degree, the mired is a unit of measurement used to express color temperature. It is given by the formula:

where M is the mired value desired, and T is the color temperature in Kelvins.

As the formula above indicates, a mired is the reciprocal of one megakelvin. As Priest noted, the advantage of using this scale is that the steps, unlike the kelvin scale, are perceptually equal to human vision. A 100 mired adjustment at any point on the scale will appear to shift the color by the same amount (this is not the case with the Kelvin scale).

One specific application of the mired scale is what we commonly refer to as a CTB (Color Temperature Blue) filter, which is the needed correction to filter a 3200K tungsten light to match ambient daylight of 5700K. In such a case the filter would be placed over the tungsten light and not the camera's lens.

The way corrections are calculated is based on two logarithmically spaced Kelvin scales running in opposite directions with a single mired scale between the two.

¹ At the time the Kelvin scale was developed as a way to measure the "hue" of light emitted from light sources, there were no artificial light sources in existence that strayed very far from the light emitted by black body sources of radiation at various temperatures. This is no longer the case. Many modern light sources (fluorescent lighting, LEDs, high pressure sodium vapor, etc.) emit light at hues that are a large distance, along the Green←→Magenta axis, from the Blue←→Amber axis that is defined by the hues of light emitted by black body radiators at specific temperatures measured in degrees Kelvin.
² That is, -131 mireds is 131 mireds of blue correction. A filter with 131 mireds of amber correction would have a value of +131 mireds.

The magenta – green adjustment slider is associated with old TV and computer Monitor technology. Color signals were antilog and variations were often due to signal timing variations. Signal timing changes with distances between components in the system. Skin tone, a memory color, can be different, especially along the green – magenta axis. Thus, the color adjustment slider.

White balance has as its basis the differences in lighting between ambient daylight and ambient tungsten light bulbs. The differences are along a blue – amber (salmon) axis. Additionally, tungsten light is based on the temperature of the glowing filament as heated by voltage. Low voltage lamps output a salmon-colored light (low temperature) whereas photo lamps were typically over-volted allowing them to output brighter, bluer light due to a higher operating temperature.

5
Why isn't there a Red/Cyan slider in Color Temperature sliders in photo editing software?
14
How to set tint if one is colour blind?
3
Hotshoe flash with adaptable color temperature?
0
How do I map white balance settings on the Sony NEX to Lightroom?
10
What *exactly* is white balance?
5
How to scale between two white balance settings for perceptually equal increments?
3
White balance math for white, black, and grey color cards
0
How to choose the correct white balance for star trail photography (Nikon D3200)
3
Why does Lightroom not have a cyan-red slider for color correction?