How can I achieve more clarity in my photos of the moon?

I took this photo of the blood moon this morning and I am finding many of my photos, especially landscape photos, have a significant lack of clarity. I'm not looking for a photo critique because I know this particular photo is crap. I'm looking to identify my source of failure to nail a significantly clear photo. 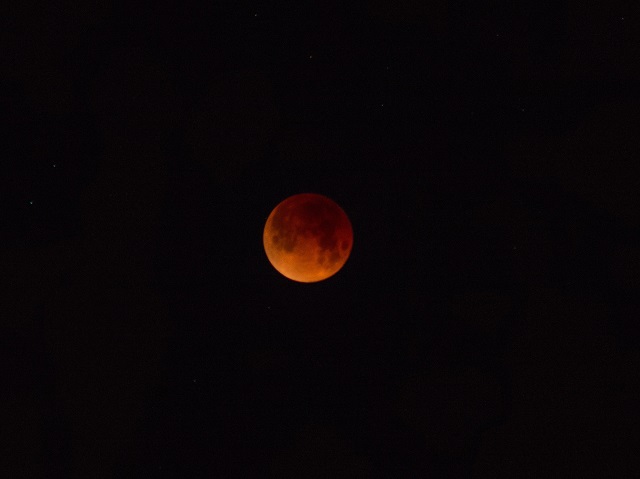 Canon EOS 70D with a 100-300 telephoto lens (I'm sorry I don't know the exact model. It's from Canon but not one of their professional quality lenses.)

Mounted on a decently stable tripod

I turn on live view, and square up the target in the display. I then set my focal length, focus in using live view, adjust the focus as sharp as possible and take the pic. I've noticed that in this case, the picture was incredibly grainy, which doesn't translate to the final photo, but wonder if it has anything to do with it.

This particular shoot I found it difficult to balance out the variables with a dark sky and a moving moon that starts blurring after 1-2 seconds of exposure, which is why I had the aperture wide open and the ISO cranked up.

I can't tell where I'm failing:

Equipment: The 70d takes great photos but the telephoto is not great when it's totally zoomed in. My wallet doesn't hold enough cash for a motorized mount to track objects in the sky.

Circumstance: I've seen great photos of the moon with the use of a camera and a tripod, so I know this is possible. Although, I keep seeing pictures of this big gorgeous moon over the landscape, and when I use my wide-angle, the moon shows up as a dot. What the hell are people doing to get the moon so big?

Beginner skill level: I know this is the biggest culprit, but being the beginner, I'm unable to know where to adjust.

Some possible reasons, arranged in the likely order of influence, for the lack of clarity in the example photo:

35mm film is much less demanding of a lens in terms of resolution than modern digital sensors such as the one in your 20MP 70D. From an answer to a question about the difference between "digital lenses" and "film lenses"¹:

Although not universally the case, most lenses designed and introduced during the digital age are better than their older film era counterparts, especially in the consumer and mid grade sectors. Manufacturers of the top tier lenses have also been forced to introduce newer versions of old classics. The new consumer lenses may not be as good as the old "L" glass (but sometimes they get close), but they are much better than yesterdays consumer lenses. Especially zoom lenses which have benefited tremendously from computer aided design and modeling. What used to take weeks or even months to test by making a physical prototype can now be accomplished in a few hours using supercomputer simulation.

Users of digital cameras tend to expect more out of their lenses due to primarily two factors:

2) Shooting a very dim object that is moving across the frame. One second is far too long to expose the moon using a 300mm focal length without a tracking mount if one is going to critically look at the image at 100% magnification. At 100%, it is easy to see the trails of the two bright stars in your example photo. The moon is also blurred by approximately the same amount of movement.² The moon is not normally a dim object, so we usually do not need to worry about our shutter times being too slow. Even though we usually shoot it at night, the moon's surface is being directly illuminated by the sun. At ISO 100 and f/8, we would normally expose the moon for about 1/125-1/250 second. But during a total eclipse, when the earth blocks the sun's direct light from illuminating the moon, the moon's surface gets a LOT darker.³ The earth still rotates at the same rate underneath the sky. The reduced brightness pushes us into a very tight corner regarding how to collect enough light for a usable image without the apparent motion of the moon making it blurry. The most obvious solution is to use a wider aperture - if one is available. But even moving from, say, f/8 to f/2.8 only gains us three of the thirteen-plus stop difference between a full moon and totality. Going from 1/250 second to 1/15 second only gains another four stops and at 300mm we are already going to start seeing motion blur when pixel peeping. At that point we're still about 3-6 stops dimmer than when the moon is full. Going from ISO 100 to ISO 1600 gets us back in the ballpark, but we have given up a lot in terms of clarity due to:

3) Atmospheric interference. If you were shooting from the location indicated in your user profile, the moon was fairly low on the horizon at the time. Just as the sun is much more distorted by the earth's atmosphere at sunrise and sunset than when it is high in the sky, so is the moon. Not only is the light having to travel further at an angle through the ocean of air surrounding our planet, but the temperature differentials near the terminator (the line between daylight and dark) tend to increase atmospheric turbulence in the times around dawn and dusk.

4) Letting the camera make all of the decisions about how to process the raw data from the sensor. This is particularly the case with a dim object, such as the moon during totality, that is moving across the frame. This limits our exposure time. Most great moon photos (when it is not in the earth's shadow) you see are saved in a raw file format and post-processed to fine tune the contrast between darker and lighter areas on the surface of the moon. Color temperature and white balance adjustments, sharpening, and in some cases even digitally applied color filters, can bring out the contrast between different areas of the moon. This is even more critical when the photo in question is taken during a total eclipse.

5) The noise reduction applied to using ISO 1000 with a Canon EOS camera. I'm a Canon shooter because, overall, Canon works for what I do. Every system, though, has advantages and disadvantages. One of the things where Canon falls a little short is in the way their cameras handle the "partial" stop ISO settings. For a comprehensive look at how Canon cameras handle the "partial stop" ISO settings and why using the "+1/3 stop" ISO settings (such as ISO , 250, 500, 1000, 2000, etc.) can make your photos noisier than other ISO settings that are even higher, please see Is it really better to shoot at full-stop ISOs?. The amount of NR the camera applies to ISO 1000 by default will reduce the detail in the image.

¹ Back near the beginning of the consumer digital SLR era, APS-C only lenses were often marketed as "digital" lenses.

² The moon moves roughly 1/2° less per hour than the stars as viewed from the earth's surface. That also happens to be approximately the moon's angular size in the sky. So for a one second exposure, the moon would move across the frame 1/3600 of its own diameter less than the nearby stars would during the same exposure.

³ This article from Space.com says anywhere from 10,000 to 100,000 times dimmer, depending on the earth's atmospheric conditions. That's between 13 and 17 stops darker than a full moon!

Michael's excellent answer addresses the reason your moon photo lacks clarity. However, regarding one thing you said in your question,

My wallet doesn't hold enough cash for a motorized mount to track objects in the sky.

Depending on your willingness, desire, and/or ability to take a DIY project, that is not necessarily true. A barn door tracker can be made very inexpensively. However, for stable tracking when using a long focal length, you'll definitely want the tracker motorized and timer controlled.

Even a basic, simplest tracker design will improve your results. But for longer exposures, and especially when using longer focal lengths, they can still leave you wanting more. In those cases, you need to be aware of the errors introduced by the barn door design's geometry, such as the so-called tangent error that gets worse the longer the tracker is running. These errors can be mitigated to varying degrees with modifications to the geometry (depending on which design was chosen (as shown in the Wikipedia link above), or with nonlinear rate control of the lead screw motor's speed.

5
Why are my photos of the moon blurry?
0
In photographing the moon, it appears hazy, Why?
74
How do I set the proper exposure for nighttime moon photos?
4
Multiple copies of the same exposure, but randomizing the noise?
11
is there a real difference between "digital" and "film" lenses?
26
Is it really better to shoot at full-stop ISOs?
2
Why do moon shots bring out the worst in telephoto lenses?
3
What is pixel peeping and why do some people say should I avoid it?
3
Taking a picture of Starlink satellites
4
Which tracking motor to use for low-end wide-angle astrophotography?
See more linked questions

37
How to nail focus for DSLR astrophotography?
14
Capturing the Milky Way: what did I do wrong?
28
How do I capture the moon and its surrounding context?
2
Night Sky SuperResolution (instead of star trails) - possible?
1
What combination of camera, teleconverter, image stacking, or sharpness increase will best improve my moon photographs?
2
Will a focal length reducer help me image deep sky objects using an 8" newtonian telescope?
4
Are there cameras allowing shortcuts for manual exposure settings?
13
How to edit my RAW photo to make the stars come out more?
13
What kind of filter do I need for safe sun photography?