How can I capture motion while maintaining the sharpness of the main subject with an iPhone?

I want to capture motions. I use shutter priority mode with very low speed to get motion blur. But still want to maintain the sharpness of the main subject. I'm using iphone Camera + app. But I couldn't get the sharpness I wanted. What are the strategies I can use to improve the sharpness? 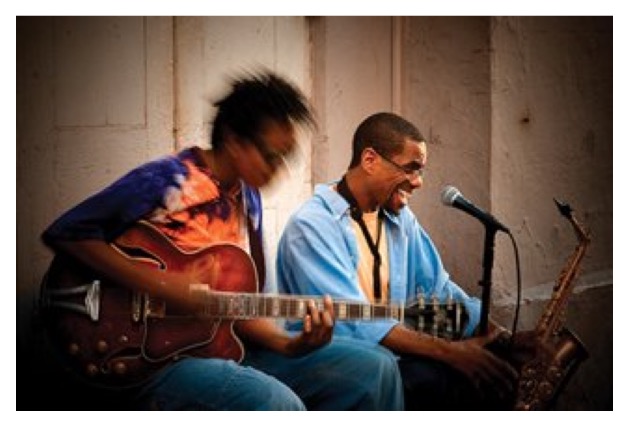 I'm not sure how easy it'll be (if possible at all) in the situation you're contemplating (using an iPhone at a concert), but for other situations (especially where the motion is a little more predictable), you can pan the camera with the motion of the subject, so (assuming you get the panning right) the subject is sharp, but the background is blurred.

Here's an example from the 2011 USA Pro Cycling Challenge: 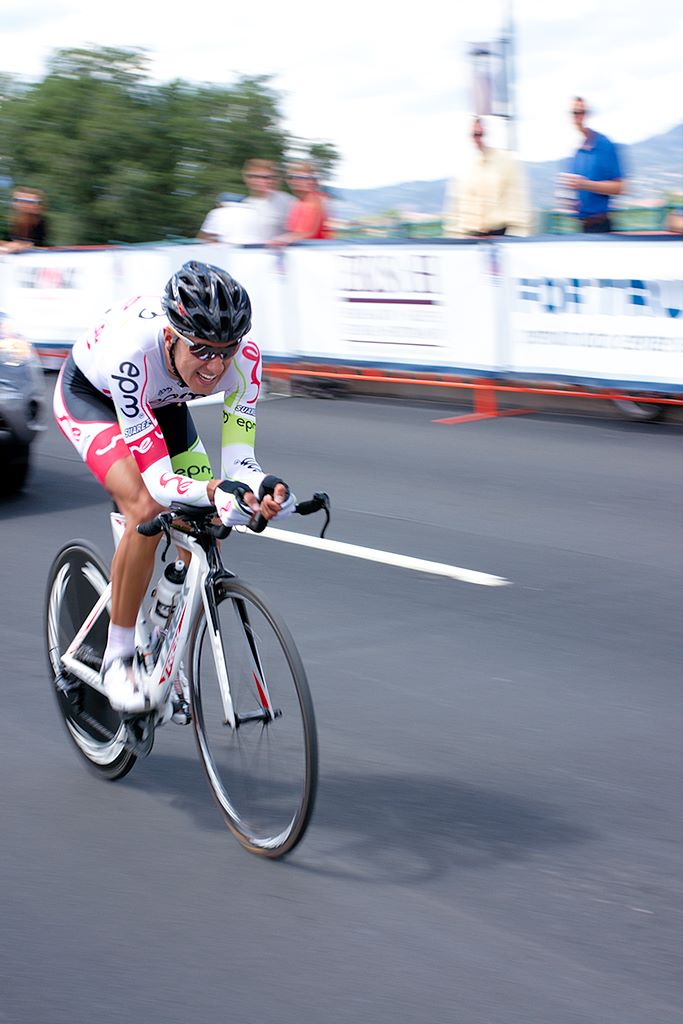 The shutter speed for a photograph applies to the whole scene.

If some thing is very far away, the amount of the frame it moves in a given time is somewhat less than that for something moving the same distance but closer to you, so one approach would be to make sure the thing you want to show moving is closer. But this will only go so far, and it sounds from your description of the setup that you're already doing this and it isn't helping.

So, the bad news is: there's no way to do this in a single exposure. You'll need two exposures. * There are two basic ways to do this:

Unfortunately, the second approach will be very, very difficult with an iPhone. (You might be able to accomplish it with something like the Godox A1, but since that product is not out yet, it's unclear.) Even with a camera with a hotshoe or remote-trigger flash, you'll need to have the flash positioned right to freeze what you want and not what you don't — this may be hard if you're at a concert or otherwise in a live setting rather than somewhere you can control the staging.

So, that basically leaves the combine-in-post approach. This may be hard too if the light is such that you can't get a clear shot with a fast enough shutter to freeze motion at all... but that's a separate problem, I guess.

* The word "exposure" has several different senses. See this answer for discussion.

8
What's the difference between exposure and shutter speed?
4
What is "Dragging the Shutter"?

23
What is the shutter speed needed to stop motion?
39
Focus problem vs. motion blur vs. camera shake - how to tell the difference?
1
How do I reduce noise in a sequence of photos of the same subject over time?
6
How can I get a clear subject with motion-blurred (traffic trails) background?
7
How can I improve the sharpness for tabletop still life of photography?
5
Why isn't my Nikon D3400 freezing motion even with the shutter set to ¹⁄₄₀₀₀th of a second in View Finder Mode?
2
How to get sharper photos with a kit lens when in low light conditions?
2
Slow shutter speed and image sharpness