Now that we are moving to the digital world...

I'm using Nikon Coolscan V ED and I'm very happy with it. Sadly, it has been discontinued and now the only Nikon option is much more expensive Coolscan 9000 ED.

There are two Coolscans V on the eBay at the moment but I don't think I would comfortable buying a film scanner on a online auction site ...

EDIT: The biggest problem with a second hand scanner is that you don't know how much it was used. The light source in the scanner has a limited lifetime (same as the bulb in a video projector) and it's hard to tell how close to this limit it is.

If you can test the scanner you can at least see if it still works fine on dark source. (With dia film that means a dark object and with a negative film this means a bright object.) In that case I'd suggest selecting few negatives of a known quality (i.e. you had made prints from it) and running them through the scanner. That would show you the detail in bright areas. You should also check for picture noise that would indicate transport problems (i.e. a missing line in the scan or a "squashed" picture with one dimension disproportionately small) and for the noise in the scanned photo. Of course, some noise is imminent as you are working with a noise-sensitive equipment (scanner) on a source that already contains a noise from the analog recording process.

I had 10,000 images in my slide and film archives that I wanted to scan. I tried the scanner route but quickly became frustrated with its slowness.

So I bought a high quality macro lens and made slide and negative adapters. I then used my DSLR and macro lens to photograph my slide/film collection.

My collection has been successfully scanned and I can report the following experiences:
1. It is fast and simple to perform
2. Exposure was always correct, thanks to the excellent exposure system of my DSLR
3. I obtained crisp, sharp results, thanks to the good quality macro lens
4. The resolution of my DSLR/macro lens combination easily exceeded the resolution of my film images. 5. The output was easily processed through my normal DSLR processing workflow.
6. I am left with a good macro lens which I am now happily using in my normal photography so it was a lasting investment.

I have a Minolta DiMAGE Elite 5400. It has some very good features: a high resolution, good D-range, probably the easiest to use scanner software I've ever come across, and despite its age it has a USB 2.0 connection. I don't know if it's the best scanner out there, but I know how to use it properly, and that makes a bigger difference if you ask me.

Knowing how to scan properly is almost an art in itself, and every scanner has its own quirks. So I'll share my knowledge of "my" scanner with the world, in case anyone else ever wonders about what kind of scanner to buy ;). Btw, the 5400 II is almost the same scanner.

First, its biggest downside: it's no longer supported, so the lack of new drivers means it requires some trickery to get it to work in newer OS's. In Windows, you have to install VueScan, which has reverse engineered drivers for almost anything (the demo version will do). Then you can uninstall VueScan, and use the drivers to run Minolta's own software (which is easier and gives you more controll in my opinion).

It has one great feature I've never seen in any other slide scanner: a manual focus dial (granted, I haven't ever seen any professional scanning equipment). Using it properly takes a bit of getting used to: you have to find a sharp edge in the preview scan, then click on that spot with the manual focus target. However, I can easily outperform the automatic focus of the scanner, or the auto-focus of the scanners at school (Nikon brand) in both speed an accuracy with this dial. If you have a lot of high-ISO film it makes the characteristic grain look much better, because on the whole gives the scans a much better per-pixel sharpness.

Of course, I like grain; if you don't and prefer to use grain reduction this feature is only useful with film that's a bit curved, so you have control over which regions are sharp and which regions are slightly out of focus. Speaking of grain reduction: dust removal is usually great, and saves you hours of healbrushing in Photoshop, but it introduces a bit of softness to your picture.

BTW, there's a problem I've come across with just about any scanner I've tried: sometimes you can see that there's much more detail in the negative that scanners will pick up with their regular setting. This is especially true with black and white pictures. Here's an example: 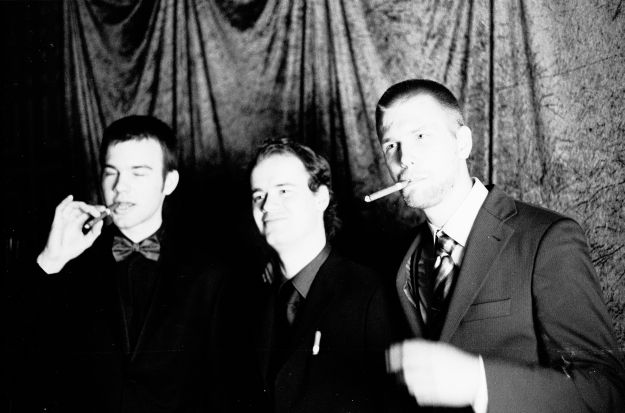 The picture itself isn't important; it's just a good example for it's technical difficulties. This is what the scanner makes of the negative when set to automatic. When I look at the negative there's detail in the face (highlights) and in the clothes (shadows), but the scanner doesn't have enough D-range for both. 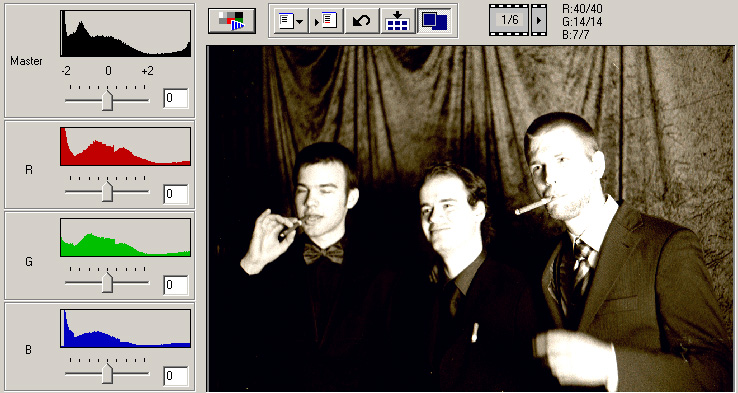 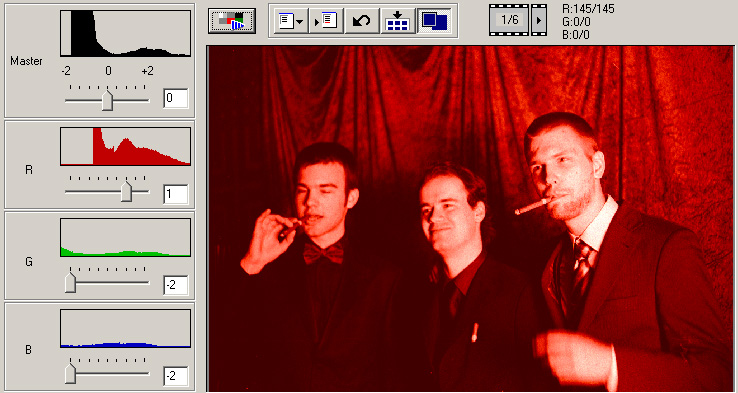 A lazy conversion back to black an white already shows much more detail in the highlights and shadows: 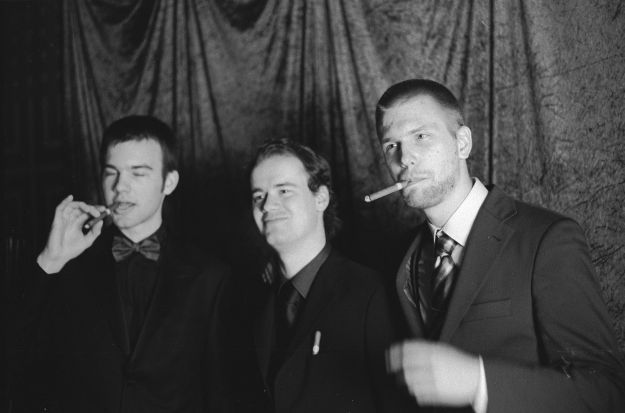 With a bit more tweaking you can then fix the photo proper (it's just an example, so I didn't bother).

Basically, you're scanning a HDR picture using the different color channels for different exposures. Here's the weird part: In a lot of cases it seems to work better than scanning at different exposures and then merging them as an HDR picture! For some reason, red seems to be good for capturing shadows, whereas blue seems to be good for capturing highlights. I'm sure there's an explanation for this.

Also, another advantage to scanning hard-to-salvage black and white in color: the master exposure correction stacks with the exposure correction of the color channels, so you can correct by another 2... stops? It's probably optical density, but it's not explained in the manual).

The DiMAGE 5400 also treats exposure and exposure correction differently if you set it to automatic or manual exposure. The example here has automatic exposure that's tweaked afterwards. Without it, the strange cutoff in the red channel would disappear, but the contrast would be even higher.

YMMV with this trick, because it depends on how much control your software gives you over your scanner, and on the type of film you use. I've used it to successfully scan film that was severely degraded over the years, or very poorly exposed.

If you are just looking for a way to digitize your collection, you may mant to consider a scanning service, once they're scanned there isn't much need for the scanner.

http://www.scancafe.com is one of the services I've heard of, but I'm sure there are others too.

I have used two different scanners for this.

First, a Minolta DImage Scan Elite 5400. This is a high resolution 35mm scanner which scans strips of negatives (or slides) as well as framed slides. The "5400" refers to the resolution: 5400 ppi. That's pretty high.

Second, an Epson Perfection 4990 Photo flatbed scanner. This comes with a number of adapters to scan negatives and slides in transparency mode. I used this mainly for scanning my Hasselblad 6x6 negatives. (A dedicated slide scanner for this format is exceedingly expensive). Did some high resolution jobs with it, like 7200x7200 pixel scans (that's 3000 ppi), though only in black&white. Very satisfied with the results.

Both scanners are already a few years old, so you'll have to check about availability and pricing.

I like a Kodak RFS 3600 scanner although it is frustratingly slow and reads Kodachrome films too dark. but correctable. The final product would be crisp sharp images. Unfortunately, it's no longer supported. The German outfit Silvertone provides a driver, but it is expensive, almost the price of a new scanner. It however speeds up the operation, which normally takes fifteen minutes for each slide at full resolution.

I have a Canon FS 4000 US I got off eBay a couple of years ago. It needs a SCSI card but runs very well with Vuescan, which is well-worth paying for. It has USB 1 but that is slower than a wet week. The quality of the scans (4000dpi) is good and dust removal works pretty well. The automatic scan of a whole-roll of APS is very handy - I just press Go and leave it to do its thing.

Best? Good question. My answer: nfi. I'm happy with it. I did a lot of research at the time. Perhaps you should trawl Google for old reviews and comparisons. I suspect the Nikons are probably better but I also suspect your set-up and software makes more difference than the badge.

Not the answer you're looking for? Browse other questions tagged film scanner negative-scanner or ask your own question.

14
What to consider when scanning 35mm film (and scanning in general)
3
What features should I look for on a negative scanner?
1
What's the best way to copy 100 rolls of 35mm film?

17
Best auto-feed photo and/or negative scanner?
3
What features should I look for on a negative scanner?
5
What performance differences will I see from a new film scanner, replacing Epson V350?
5
Removing the curl from 35mm negative
3
Is it better to shoot or scan a film negative for Lightroom?
3
What maintenance does a negative scanner need?
2
How well does the CanoScan Lide 400 Slim digitize 35mm negatives?
0
Batch scanning of family archive: speed of flatbed vs. film scanners?
3
Hardware for scanning diapostives or negatives using flatbed scanner?