What is this Hermagis lens?

Going through my late dad's stuff, I found a bunch of vintage cameras (including a Lumicon Silver 8, a Kodak Six-20 Brownie C, and a Kodak Brownie Reflex).

There is one piece of equipment I couldn't identify - it's a lens that looks very old, seems to be made of brass, and says "HERMAGIS OPTn BteS GDG PARIS OBJECTIF CINEMA". I remember using this as a kid as a "magnifying glass". Now it clearly is a cinema camera lens, but since it doesn't have any other markings, I'm stuck.

I've googled "Hermagis lens" and similar but none of the pictures match. Here's a couple of pictures of mine: 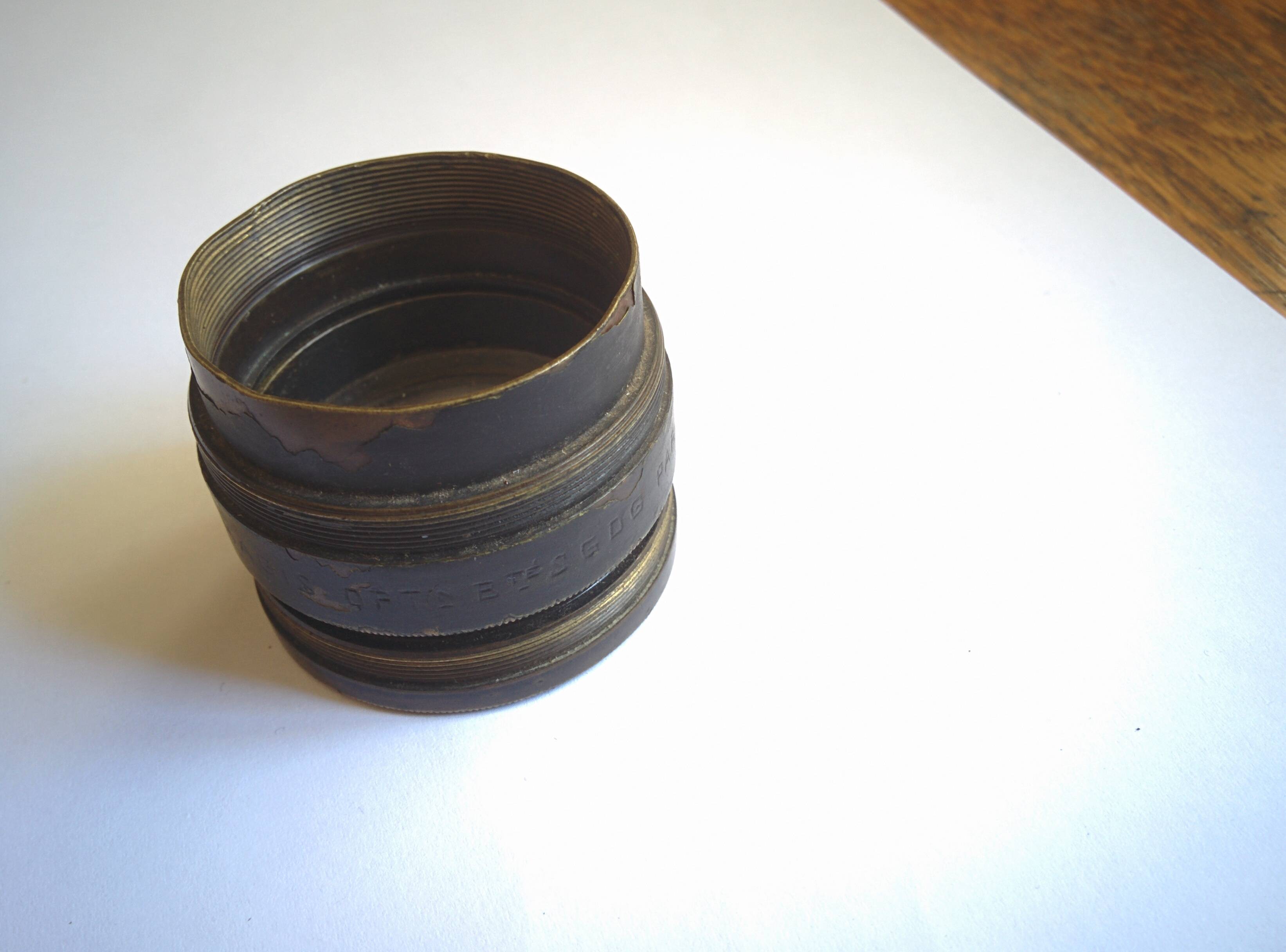 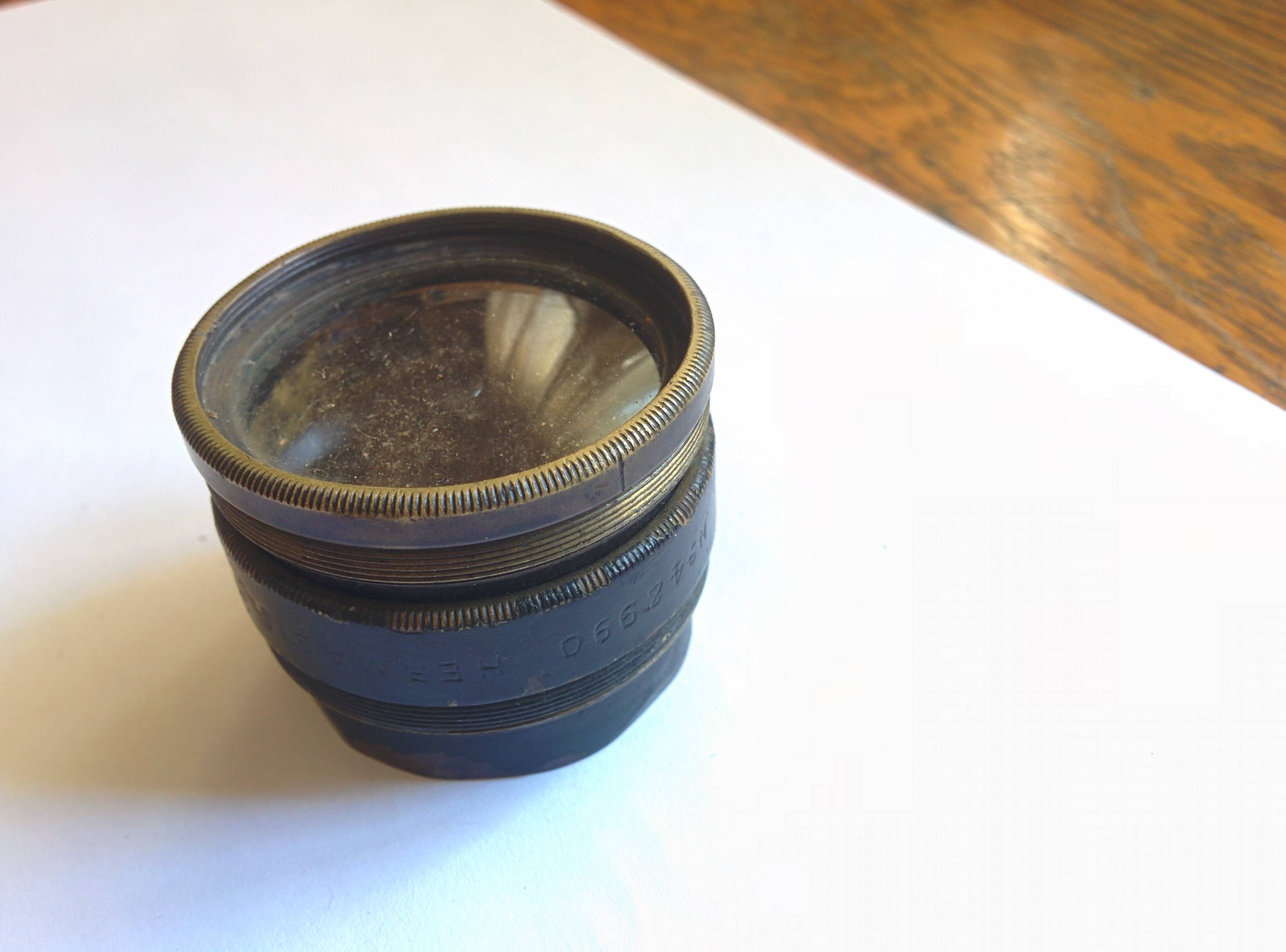 How can I find out what this is?

On closer inspection, the lens seems to have two outer threads - maybe this is two different things screwed together? Like a lens and (part of) the thing with the shutter? The french "objectif" throws me off a bit here (and this would be written in the non-lens part, if this is indeed two parts). May try to use some oil to unscrew it.

The plot thickens! After warm water, soap, and oil, I managed to get everything unstuck. This revealed a couple of new inscriptions in the lens itself: 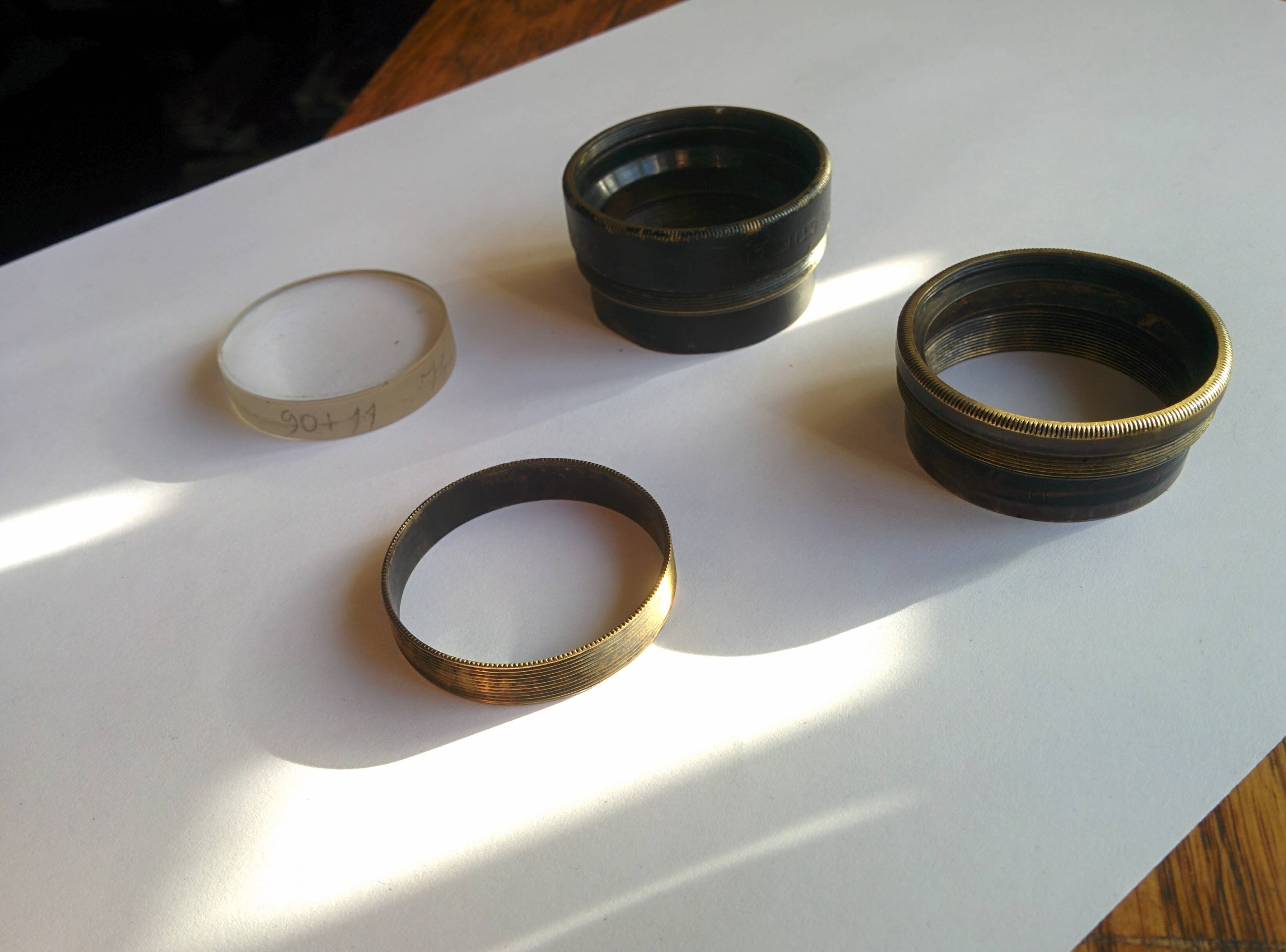 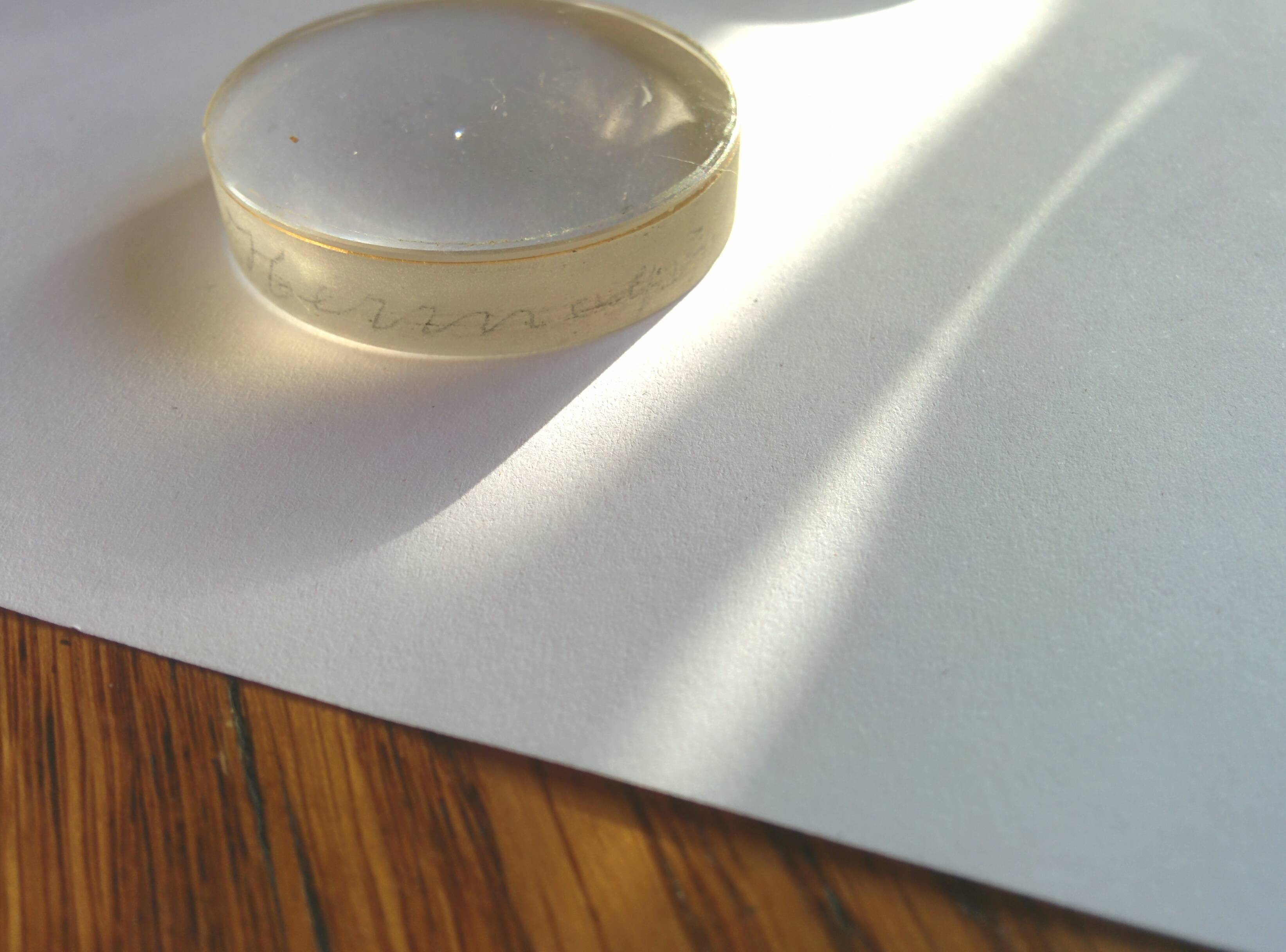 I also believe this is actually one full lens (the glass and the two smaller metal parts) and part of a second lens (the big metal part with the HERMAGIS inscription). These two were very stuck but not actually screwed together: 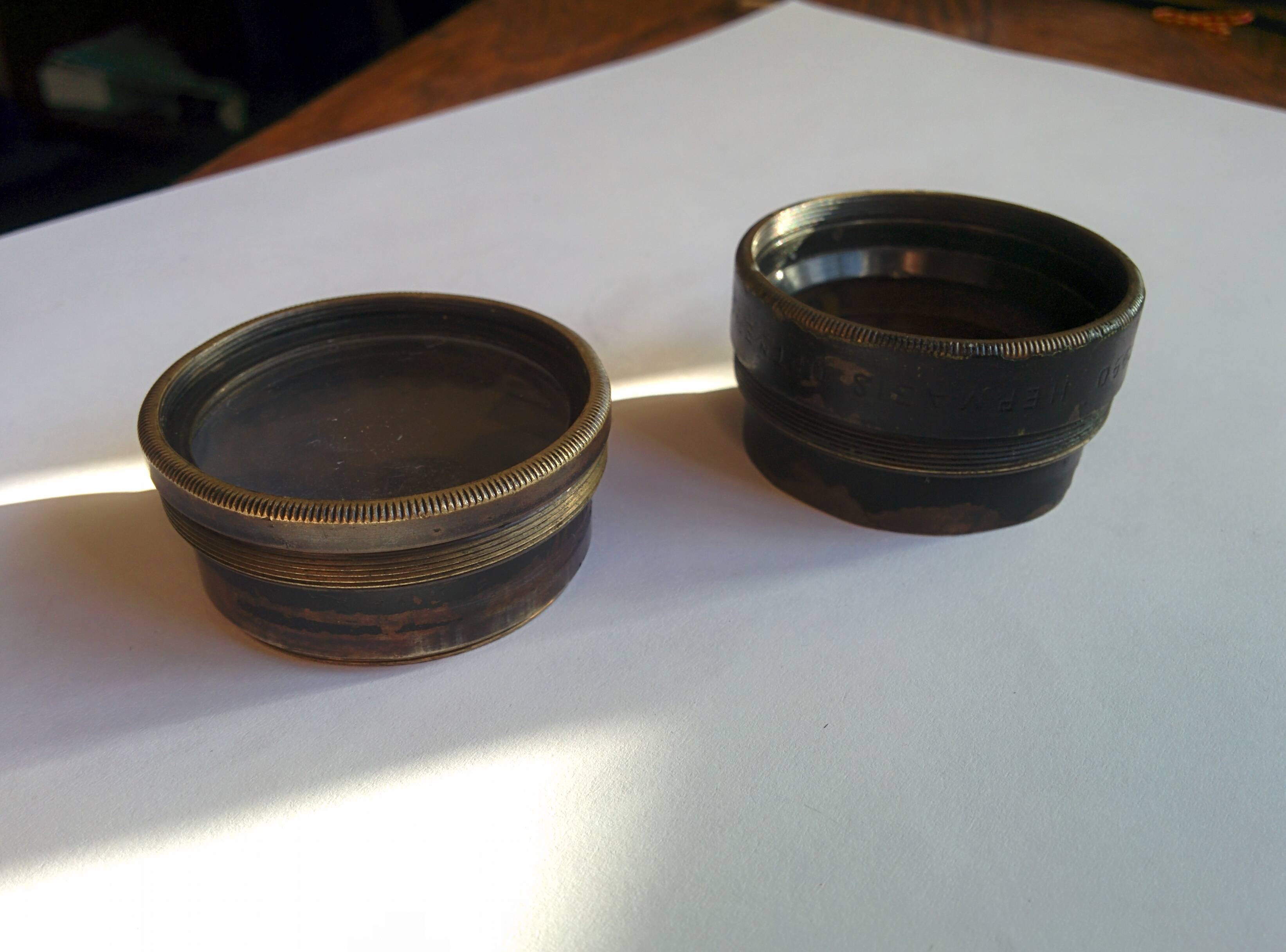 The outer ring is a bit bent so I can't put the lens and the small ring that holds it, so I can't confirm this theory yet. But now the whole thing may be easier to identify :)

For the moment I'm going to ignore the minor detail that this is a projection lens, and consider it purely as a lens.

You can determine at least the basic characteristics fairly easily. First, let's consider the focal length. The focal length of a lens is the distance you have to hold the lens from a plane to get an object at infinite distance to focus on that plane.

At least that's the theory for a "thin lens", which is mostly a theoretical concept. With a real lens, you're supposed to measure from the "primary node" of the lens, which you probably don't know. For the sake of simplicity, I'd measure from approximately the front element (the one closest to the sun, in our scenario). Although it won't be perfect, that'll give at least a reasonable idea of the focal length.

Hermagis OPTn (Opticien) was an optical manufacturer located in Paris during the second half of the 19th century or so.

'Bte S.G.D.G.' is an abbreviation of 'Breveté Sans Garantie Du Gouvernement', which means 'Patent without government guarantee'. S.G.D.G. was previously used as a disclaimer on patents issued by French authorities to signify that the patent does not guarantee any practical functionality of the relevant object.

So, what you have simply seems to be a patented projection lens from Hermangis. Any reason why you doubt this?

Not the answer you're looking for? Browse other questions tagged lens old-lenses vintage equipment-identification or ask your own question.

12
Is it possible for a hobbyist to create a lens element?
1
Can I fix a M42 50mm lens myself?
5
What is this large white Canon telephoto lens in a 1990 magazine ad for the EOS 1?
0
How to open a plastic enclosed lens assembly for repair
0
Mitakon lens and mount identification
8
What is this old 50mm f/1.9 lens?
5
What is this Angenieux lens?
2
What type of lens element is this?
3
Is there a way to remove fungus without dismantling the lens?
2
How to figure out the order of lens elements in the rear group?