How would one get a moon shot like this? 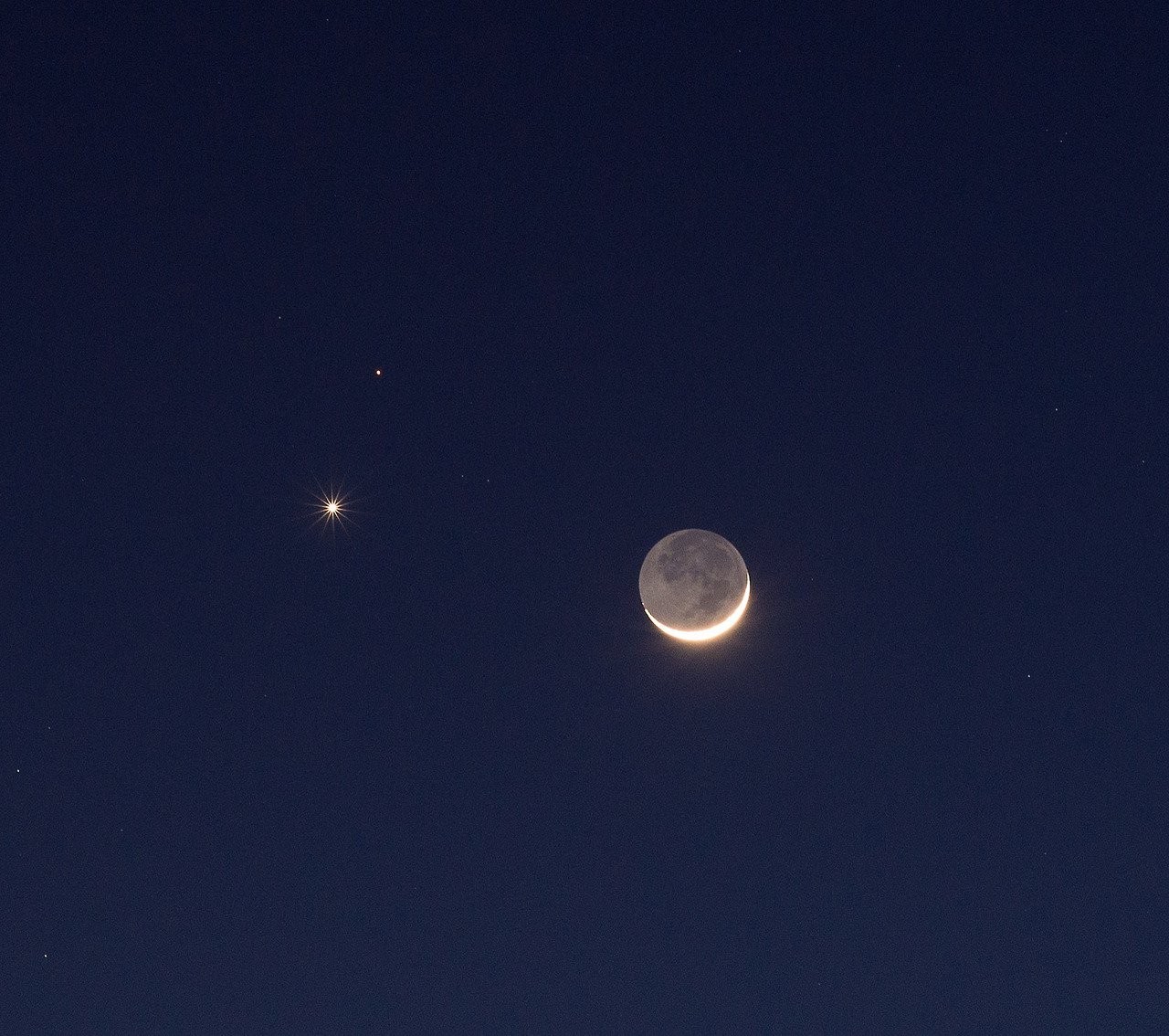 As you see, the moon has a perfectly exposed shadow (you can see the details in the unlit side of it) which I want to achieve. I understand you want to have a longish exposure time, however whenever I try to take a photo like that, I just get an overexposed crescent, and the rest is black. How would I do something like this then? Is there a specific time of day (during a twilight period or something?) or month? What about Photoshop?

Additional question, how is the starburst achieved with the planet Venus? Would the photographer have used a starburst filter on their lens or just used a slow aperture (which I doubt because it's nighttime).

The "shadow" area of the Moon is lit by Earthshine - light reflected towards the moon from the sunlit part of the Earth. From the Moon's point of view, the more of the earth that's sunlit, the brighter the earthshine is.

So try taking shots with the thinnest crescent you can manage. And keep increasing the exposure until you see some detail in the shadow area - that can be a LOT longer than a normal moon photo.

It's possible the image you've picked might be a composite - sometimes the lit part of the moon is so overexposed it bleeds into surrounding pixels and looks noticeably fatter than the rest of the moon. Or the shadow brightness may have been boosted in post processing.

Not sure about the Venus starburst - it might be from a lens with a 7 bladed aperture iris, or, as you suggest, a starburst filter (though 4 or 8 ray versions are probably more common). This is one of the things that makes me think the image might be a composite - if you look at the length of the rays from Venus, then you'd expect the light from the brightly lit part of the moon would be spread out by a similar amount, and that doesn't appear to be happening. (It could also just be that Venus, being closer to the sun and with more reflective clouds, is actually brighter than the dark gray moonrock, so the fact that both venus and the brightly lit moon are both maxed out in the photo is misleading - in reality, venus may have a higher surface brightness, producing brighter and longer diffraction spikes.)

Both the earthshine details on the moon and the venus star burst can be achieved by setting a very narrow aperture like f22 and going for a long exposure. If a wider aperture is used, you will get only a circular bright mass.

Not the answer you're looking for? Browse other questions tagged night moon stars night-photography starbursts or ask your own question.

8
How can I capture earthshine?

8
Can I combine two photos to get a good image of a non-full moon?
8
What post processing should be done to my photographs of the aurora borealis to improve colours and impact?
2
How to shoot a shot with the moon and city skyline?
5
What is the blue circle in this moon image?
2
What settings might have been used to get this photo with clear stars and long trails from car lights?
11
How do I take a photo so the moon doesn't have bright “rays”?
1
Do I need to wait for new moon to get a Milky Way photograph?