Why are images from FujiFilm X-T20 darker than those from Canon 400D?

I’ve just bought a mirrorless FujiFilm X-T20. In my first tests, it seem to ask for quite high ISO even in daytime indoor. So, as a test, I compared it with my previous camera, digital reflex Canon 400D.

With the same configuration, old Canon seems about +1 brighter than FujiFilm. How is it possibile?

First picture is from Canon, then FujiFilm. Both are shot with: 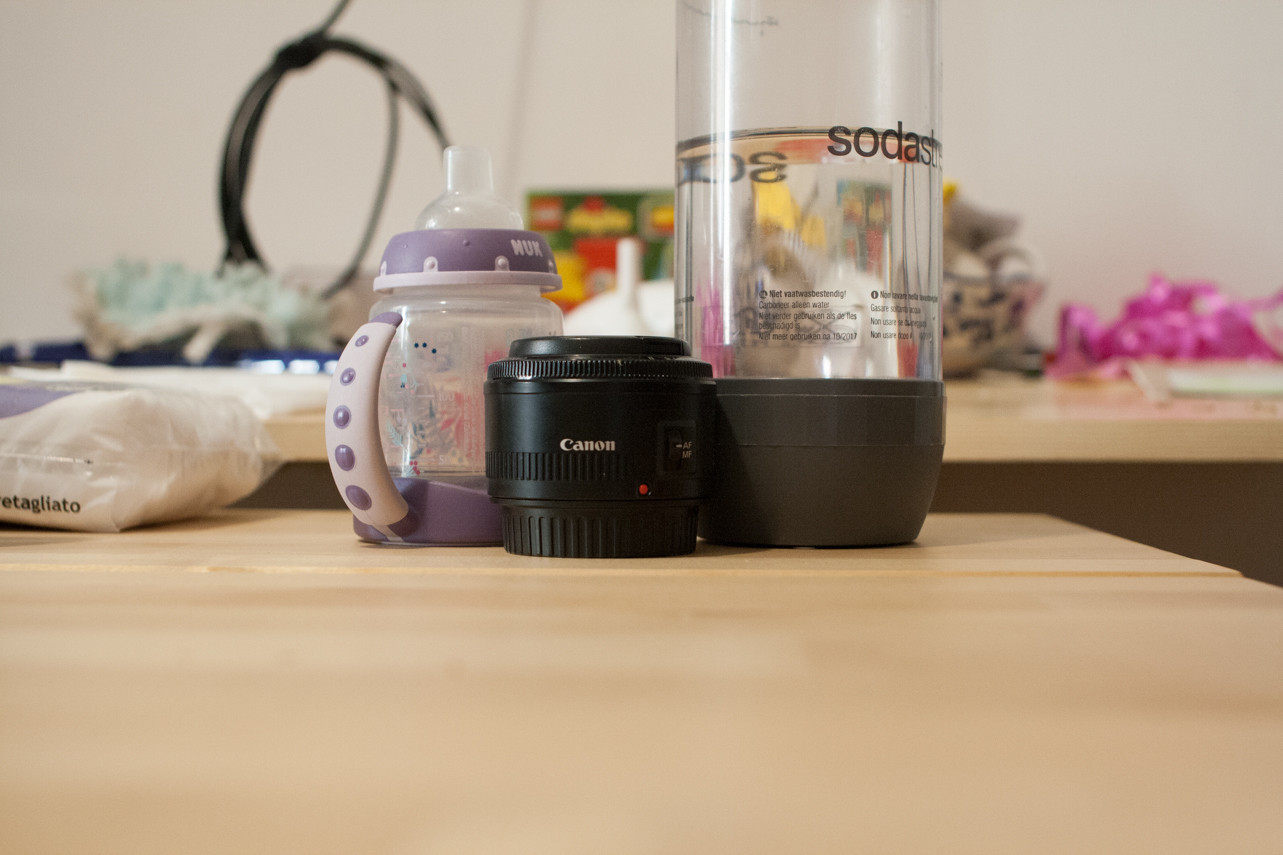 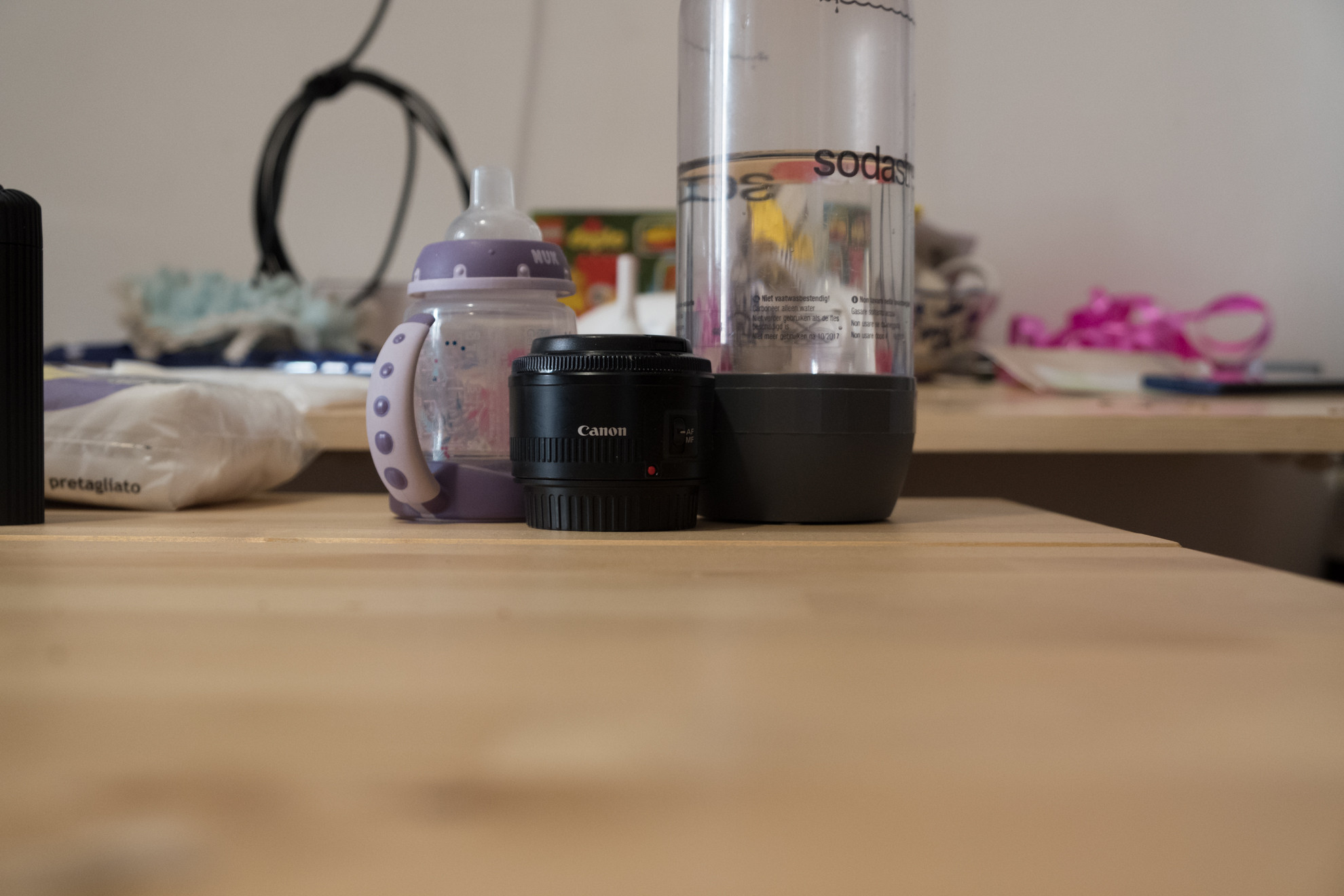 I don't have the Canon body anymore, so cannot test using the brighter lens on Canon vs the darker one on FujiFilm. But I'd expect a 1.3-stop difference. To determine the specific contributions of various factors to the results you're seeing, you'll have to further test your equipment.

If it matters enough to you to do such testing, an EF-FX adapter will allow you to use Canon lenses on the FujiFilm body. You'll have to focus manually and use a hack to set the aperture. STM lenses and some USM lenses won't be able to focus. You could also use manual lenses with adapters for both EF and FX mounts. Options include Nikon F, Pentax K, and M42.

In addition to all the other great answers I'd like to add that the Fuji x-trans sensor used in your cameras has been known to not really meet the ISO standard. Here is an excerpt from DPReview's review of the Fuji X-T1 (which also uses an x-trans sensor):

By our tests, the X-T1's measured sensitivities are around 1/2 - 2/3EV lower than marked, which is unusual for a modern camera. This means that for any given light level, the X-T1 has to use a significantly slower shutter speed, brighter aperture or higher ISO to get an image of the same brightness as an accurately-rated camera.

It's unusual to see this sort of discrepancy and we're disappointed that Fujifilm persists with a system that, while technically compliant with the ISO standard, ends up appearing rather disingenuous.

Your Canon has not exactly the same configuration. I suspect it to have the auto lightning optimizer on. You have the possible magnitudes: off/low/standard/high. And by default it is on standard.

Try to set it to off and you should have the same results. Try also to set the white balance to manual and to the same tuning, so you can have closest colors. You might have still some differences due to how each manufacturer is processing colors, and how the lens is processing the color.

There are at least two likely sources that are contributing to the variation you see.

In the case of your Canon 400D, the differences between using the "Standard" (slightly oversaturated and slightly too contrasty) Picture style with 'Auto Lighting Optimizer' turned on compared to using the "Neutral" Picture Style with 'ALO' turned off will almost certainly result in greater differences than those seen in your example images comparing your result with the 400D vs. the Fuji X-T20. One could post process the raw data collected by either camera and get a final result very, very close to the what you got with the other camera above.

Another possible source of the difference is that even though both lenses are set at f/4, one may have a higher transmissivity than the other. The f-number is an expression of the ratio between the diameter of the entrance pupil and the focal length. This is very useful for calculating/predicting the effect of a specific aperture setting on depth of field. The f-ratio does not take into account how much of the light passing through the lens is lost due to reflection and/or absorbtion. What we call 'T-stop' is a measure of how much light is actually allowed to pass through the lens. This is more useful for calculating exposure, but sometimes doesn't tell us as much as we want to know regarding depth of field. Most conventional lenses have a relatively small difference between the f-number and T-stop at any particular aperture setting, but there are some notable edge cases where the f-number and T-stop can be several stops different.

I'm not sure if this is actually the problem, but this is probably one thing that is affecting the brightness.

Try looking at the T-stops of the lenses. (T-stop is like f-stop, but, tells how much light is transmitted through the glass, f-stop only takes into account aperture size). Your zoom lens may let less light through at the same aperture as your prime solely due to the number of glass elements in the lens (the more glass, the more light is lost).

That is assuming that the ISO for each camera means the same thing. If the fuji sensor is less sensitive, all ISO means is how much gain you are applying to the sensor data so if you get less sensor data (like from a different or smaller sensor) it will be darker even at the same multiplication level.

Canon uses the Bayer matrix, which is 2x2 photosites per pixel, while Fujifilm X-T2, X-T20, X-E3 etc. use the X-Trans matrix, which is 3x3 photosites. The smaller the photosite, the less light the sensor gets, so pictures tend to be darker. That's why when I had to choose, I bought a X-T1 (16mpx) rather than the X-T2 (24mpx), for the larger photosites (and enough resolution for my needs, either).

Not the answer you're looking for? Browse other questions tagged fujifilm mirrorless canon-400d fujifilm-x-t20 or ask your own question.

6
Benefits of upgrade from Canon EOS 400D to 7D
6
Why does my Fujifilm FinePix S1800 have far greater shutter lag in EVF mode than in LCD mode?
7
How can I transfer pictures from my Canon Digital Rebel XTI (400D) to my Mac?
13
Why are mirrorless cameras much slower than DSLRs?
7
What are these strange lines on images from my Fujifilm FinePix F850EXR?
2
Why can't I see images from my Fujifilm X E2 on Windows 10?
1
Why are mirrorless full-frame cameras not more compact than DSLRs?
0
When converting from Fujifilm .raf to .tiff, why is there an option for dpi?
12
Why are Fuji lenses more expensive than others?