Why is this picture not a photograph?

Over at the aviation stack exchange site we were talking about a real airplane from the 1920s to 1930s. This picture (it even says "Foto") of the plane was used to illustrate the question. Someone then pointed out it wasn't a photograph (the other person's answer got unfortunately deleted).

How can I tell just from looking at the picture?

Could trying to extract geometry help, hoping the person drawing it (if it is a drawing) has made little errors?

Or if it is a photograph, could an influence of the lens be extracted? 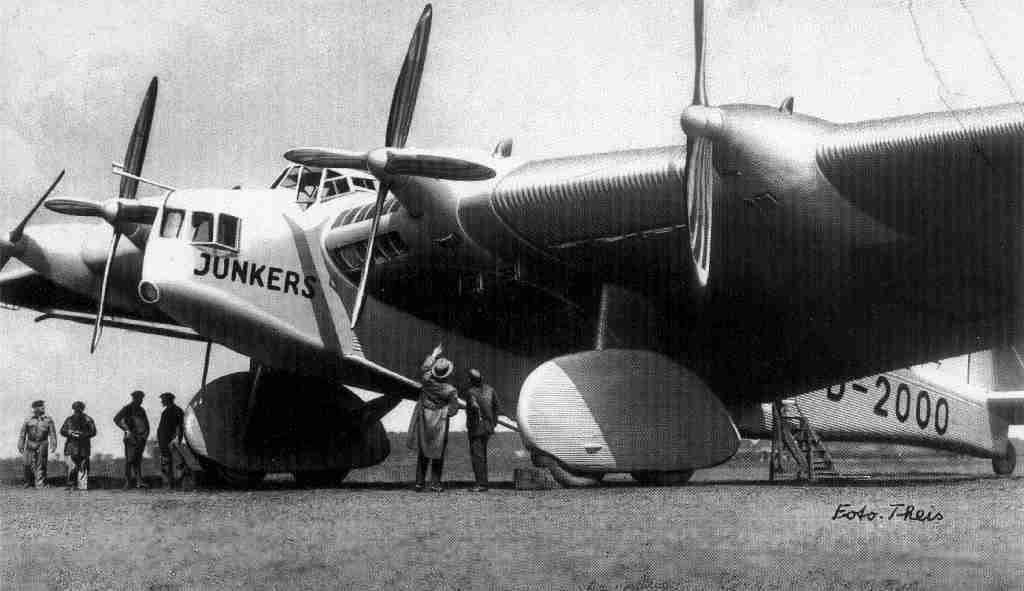 The signature on the picture seems to appear in different places on the copies that can be found on the web. Which is why I thought the photographer had stamped or signed his work after making prints.

I must admit I hadn't looked at it too closely (lack of structure, etc.).

The usual clues are mistakes in lighting effects. It is very difficult to freehand draw and get the geometry of shadows, highlights, and the like completely consistent. Another common "error" of drawing is to provide too much detail in shadow areas. Film, especially old film, had much less dynamic range than what your eyes can see. Naturally, artists draw what they see, which is usually more than what film would capture.

However, just because it is difficult does not mean it is impossible. A drawing made from a photograph as reference can be hard to spot. Incorrect shadows and highlights can prove a picture is not a photograph, but (seemingly) correct ones can not prove the reverse.

It is also not always possible to infer the geometry accurately enough from a 2D image to be able to tell whether the lighting is correct. In part, geometry is inferred from light effects. You can't therefore say something is incorrect, only inconsistent with itself.

The picture in your example seems to have overall and details of the lighting right. The detail in the shadow area is also consistent with film, not a drawing. With its low resolution and considerable compression artifacts, I don't see anything clearly inconsistent. If this is a drawing, then it is probably a drawing from a photograph. That was sometimes done back then, particularly for military pictures. The picture would be largely reproduced faithfully, with some little secret thingy eliminated, for example.

As you say, this model plane did exist and largely looked like this. You'd have to look very carefully at a high resolution version of this picture and compare it with known photographs of the same model plane. Even then, you could only say the picture was a drawing if you found something wrong. If not, you still don't know.

Just looking at a picture does not tell you if it is a photo or not.

A definition of a photograph is that an image (graphy) must be formed by photons (photo). In the case of the plane, the reason someone knows at first hand it is not a photo is that that plane never existed in the first place. Or simply know that a specific image is an illustration because knows the background of an image.

You live in an era of CGI with a quality that baffles the mind. But this is not a new thing.

In its time a good painting could look as if it was the real thing. There was a trend in painting called hyperrealism

Sometimes you actually need to submit a photo to a forensic analysis, to see if it is a photograph.

In the history of arts, there have been some optical helpers, like camera obscura, that actually projected a photo-image, but did not make the "graphy" part.

Lack of structure is not always a clue. Sometimes a man-made object could be just plain.

Not the answer you're looking for? Browse other questions tagged artwork or ask your own question.