Has anyone successfully restored or revived a completely discharged Profoto B2 Lithium Ion Battery?

I purchased a Profoto B2 250 Air TTL Location Kit which comes with two lithium ion batteries. Unfortunately, other than testing it when I got it, I never really needed to use the second battery as my first battery seemed to hold up for most jobs. When I went to charge it recently, I found that it could no longer take any charge and was completely dead. Unfortunately, it's out of warranty so there's not much Profoto can do.

Has anyone successfully revived a Profoto B2 Li-Ion battery after it's been fully discharged?

Do NOT do this.

Li-Ion have one failure mode. Fire. And it's not a normal, lighter fire, or even a stove fire. It is a fire-that-burns-in-a-vacuum fire. It's a fire-that-reacts-with-water-and-air fire.

Disclaimer: I cannot be held responsible for any damage, injury or risks associated with what I am about to describe. This is an account of my own experience. Please proceed at your own risk.

I've seen a few posts out there where some of you have experienced the same misfortune I have with having your additional profoto B2 lithium Ion (Li-Ion) battery become discharged due to lack of use and then find yourself in a position where it seemingly fails to recharge. What's worse is that Profoto's solution is for you to shell out $230 for a new one. It's an incredibly frustrating situation, especially when you haven't even had a chance to use the battery. I had the same situation happen to me and was able to successfully revive my battery.

In my case, my second battery was only used when I initially purchased the Profoto B2 250 Air TTL Location Kit. I tested both batteries to make sure they were working and then let one of the batteries sit for nearly 2 years as the first was seemed to be sufficient for most of my shoots. So I'd simply recharge it prior to every shoot that seemed to be enough. Plus, swapping the batteries take a tad bit of effort so I didn't feel super motivated to do so. Then one fine day the need arose for me to prepare for longer than average shoot and therefore needed to have my second battery prepped and ready to go. So I went to charge my second battery only to find that it would not recharge. The charging units lights didn't display the climbing LED sequence that would normally indicate the battery was charging. I left it overnight but nothing changed. I then contacted Profoto only to find that my battery was out of warranty and the best they could do was offer me a modest discount on a new one, which after shipping and handling and the requirement to ship my old one back didn't save me a much versus buying a new battery outright. Feeling frustrated, I nearly placed the order for a new one, but before I did I decided to do a bit of googling and then came across this wonderful video.

There were a number of other videos like it but I felt that this one best covered the situation I was potentially facing as well as the fix. So I decided to follow a similar procedure with my own dead B2 Lithium Ion battery. In my case, I used a Paul C Buff Vagabond Mini Battery as my "known good" battery and connected positive and negative leads to the corresponding connectors on the known good battery first, being sure to keep the free ends apart so they don't short and destroy the known good battery. I then connected the free ends to the corresponding positive and negative terminals of the dead b2 battery (note I did not have to dismantle the battery as shown in the video -- the leads were connected to the corresponding negative and positive terminals of the dead battery...that is negative to negative and positive to positive). I then found a way using non-conductive material to hold the leads onto the terminals of the dead battery so they stayed in persistent contact. 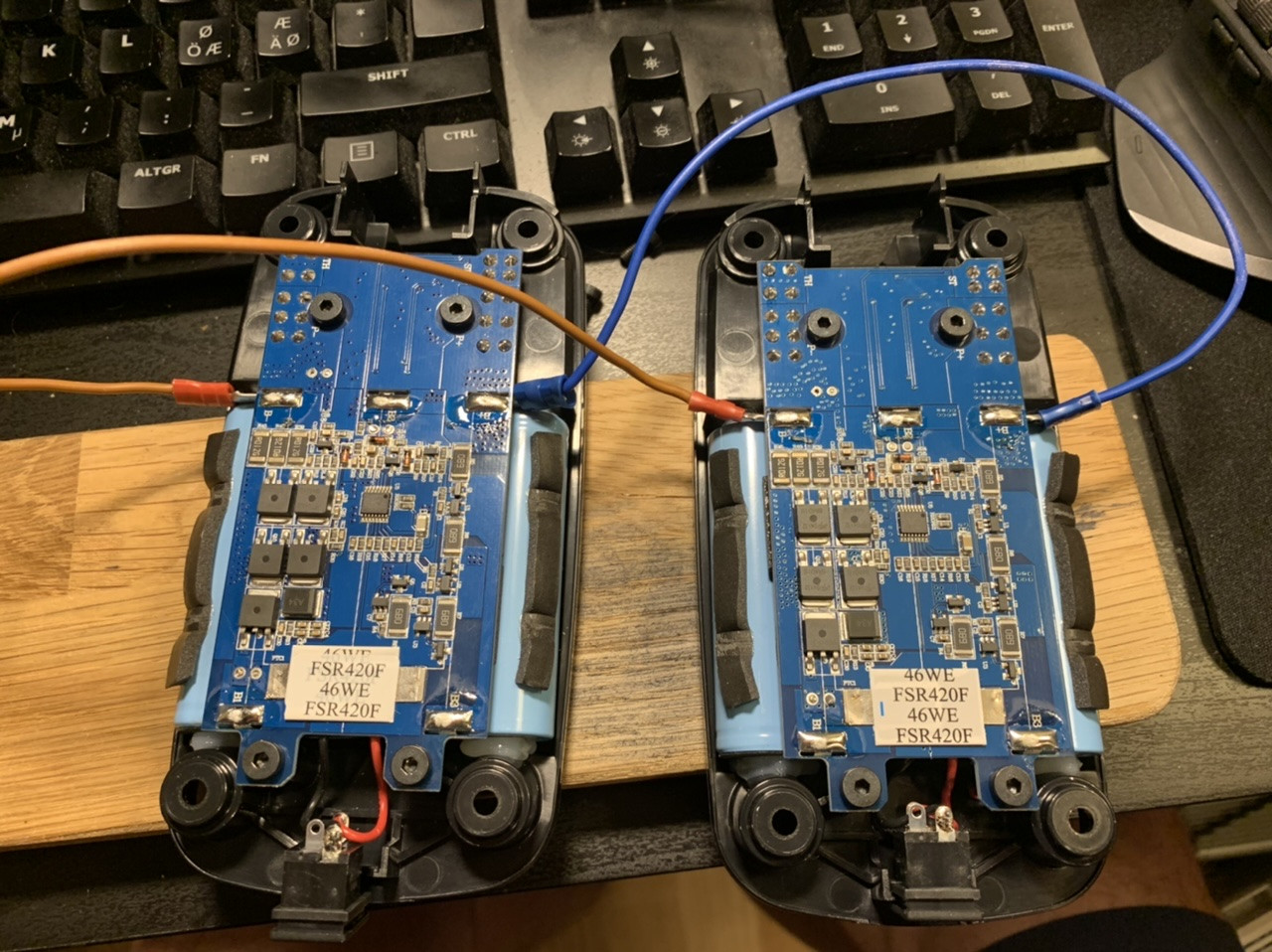 I experienced two “dead” Profoto B2 batteries. Tried what was described here, but could not make it work. Disassembled both the working battery and the faulty one. Measures close to 0V on the faulty unit, above 16V on the working battery. I hooked up two wires: positive to positive, negative to negative. Let it sit a couple of minutes and observed both batteries go down to 14.8V.

The working battery shows two lights on the indicator and took charging well. The faulty batteries showed 13.8V standalone, and at first it did not charge. It was quite hot, so I let it sit for 10 minutes to cool. When I plugged the charger to the faulty battery, charging worked perfectly! Now I have all batteries in working condition!

Yes the B2 battery does discharge when connected to the B2 control unit, yes the price of the battery is a real killer, so your average user will try anything. Yes I got the same dead results as SAM showing dead battery. Tried charging with control unit for 12 hour, then without for 24 hours, Yes same as SAM got. An old IT (30 years and counting) trick for laptop batteries is heat the battery up in front of a fan heater then put back on charge. Tried and no joy, then the second thing was press the battery test button for 20 seconds and then connect to charger with button pressed and released after charger connected, seemingly nothing at first. Within 20 minutes the charger kicked in with the charger bars lighting up and confirmed charge via the charge test button. Make of this what you will, but I saved the cost of a new battery by doing it. If it failed then I would try the residual charge method, the price of these batteries are ridiculous.

It is bad idea to just hook up other battery. What I would do is: take it apart carefully then test each cell voltage, anything under ~2v (depending on battery specs) goes to recycling, than trickle charge good one's up to 3v, after that charge cells. Than test for self discharge - if it is too high then it goes to recycling. Impedance also should be done!
And in the end use good cells. No job is so urgent that you can not do it safely, so never try like that guy charging from other battery! That's what happens when you don't know what you buy cause these batteries are worth less if you don't use them. And optimal storage conditions is to store them at 40% charge disconnected in cool (10°c - 24°c) dry place. That way it will hold charge longer.

Do you disassembly battery? Try to disassembly and measure voltage on banks.If it is not less 2.5 volt, try recharge banks at outside source. Good luck!

Not the answer you're looking for? Browse other questions tagged battery charger battery-drain profoto or ask your own question.

4
Uses for a dead/dying lithium-ion battery?
2
What is the best way to care for batteries?
2
How Long Does a Rechargeable Lithium-Ion Battery for Digital Camera Live?