What is a rolling shutter? When do I have to be aware of it?

In answer to another question, Adam Davis writes:

Rolling shutters often are also mentioned in the context of DSLR videography. However, I am yet to see a discussion of what a rolling shutter is, how it works and when it is important.

What is a rolling shutter?

What are the implications of using one for my photos?

What Adam is referring to

What Adam is talking about is not actually a rolling shutter, it's just a focal plane shutter. It also does nothing special above 1/200, except that the effect of the shutter curtain has some interesting properties which can become more pronounced at higher speed.

The diagrams on the wikipedia page (reproduced below) illustrate it best. Essentially the shutter consists of two curtains which move from top to bottom (or in some film cameras, left to right) in quick succession. The gap between them is what exposes the image.

Focal-plane shutter, low speed. Black square is the sensor, red and green squares are the first and second curtains.

Focal-plane shutter, high speed. Black square is the sensor, red and green squares are the first and second curtains.

If the shutter speed is fast enough, the second one will start closing before the first one has fully finished opening, so the entire frame won't all be exposed at once. Therefore, you get a situation where anything that happens really fast, like the flash of a camera or the oscillation of a fluorescent light, may cause light not to cover the entire frame but instead create bands or gradients from top to bottom where the light is different.

The diagrams show the shutters moving horizontally as they did in most 35mm mechanical film cameras, whereas modern cameras with electronically controlled shutters (film or digital) almost universally have vertical shutters. It's the same effect but in a ninety degree different direction.

What a rolling shutter effect is

CMOS sensors exhibit a rolling shutter effect when they are in live view or video mode, in which they are being read for every video frame. Instead of capturing the entire frame at once, information is read from each row of the frame one after the other, top to bottom. The whole process takes up to 1/30 of a second on most cameras. This creates a jelly-like wobbling effect in recorded video when the camera is handheld or moves a lot.

In a given sensor, this rolling shutter happens equally regardless of the shutter speed, though with slower shutter speeds it may be less noticeable in subject movement because of the extra motion blur. The effect is not usually noticeable when the camera is fixed on a tripod or panned steadily, but is more obvious when the camera is hand-held or during fast camera movements.

CMOS sensors capable of higher frame rates than 30 frames per second (and not just through repeating frames) will exhibit less rolling shutter effect because their sensors will have been designed to be read faster.

CCD does not suffer from the rolling shutter effect.

The rolling shutter is a method of image capture which is not by taking a snapshot of the entire scene at single instant in time, but rather by scanning across the scene rapidly (vertically or horizontally).

The implications of using a rolling shutter can produce predictable distortions of fast-moving objects or rapid flashes of light such as wobble (jello effects), skew, smear and partial exposure. 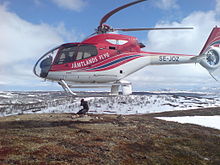 The rotor blades seem to be swept back more than usual due to the rolling shutter effect. 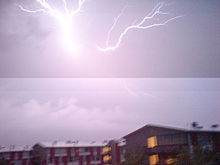 A photo exhibiting partial exposure. Lighting conditions changed between the exposure of the top and bottom parts of the photo. 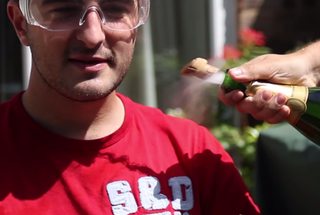 Shadow of champagne cork shows that it already hit the face, however cork is still suspended in the air.

This back-in-time phenomenon can be explained by the following animation (where changing colour indicates a shutter rolling vertically from the top to the bottom):

Here is demonstration by The Slow Mo Guys how a rolling shutter works based on Canon EOS 7D:

Adam's terminology is slightly out - you don't get a rolling shutter above 1/200s or so, but one whose where the bottom edge starts to close before the top edge has fully opened, but the effect is the same (a rolling shutter implies the scene is constantly read out from top to bottom).

Effectively what you get at high speeds is a slit that moves up the sensor exposing one part at a time. This has implications for large changes in lighting during the exposure, such as flash, or in the original context florescent lights which vary during the AC cycle.

This movie on youtube is the best explanation of this I've seen.

I discovered it on this page on DYI photography site

The term rolling shutter is used when the second shutter starts to close before the first shutter has finished opening. In the extreme case this means that there is just a thin opening that rolls across the film/sensor. You could get the same function from a single shutter in the form of a curtain with an opening that rolls across the media, but that construction would give you less flexibility when it comes to exposure times.

Not the answer you're looking for? Browse other questions tagged camera-basics rolling-shutter shutter or ask your own question.

1
What is the advantage of rolling shutters, if any?
0
What is the cause of this speed-dependent distortion?
0
Why the ball is not round?
82
Do fluorescent lighting and shutter speed create a problem with color cast?
27
What exactly is flash sync speed, and should it be a factor in a buying decision?
14
Should I use the highest shutter speed for regular shooting?
16
Which cameras can sync at faster than 1/250?
10
What configuration would limit my DSLR's shutter speed to 1/200?
21
Why is there a mechanical shutter in a digital camera?
14
Why do DSLRs in movie mode have a rolling shutter instead of a global shutter?
See more linked questions