How can I take a picture of a Christmas tree without lens flare around the Christmas lights?

I'm trying to take a photo of the Christmas tree in the dark, so that the Christmas lights are the only source of light (or at least the only apparent source of light). I can get a nice short from a tripod by combining a series of photos into an HDR image, however the only problem is that there's strong lens flare/diffraction spikes around the light source: 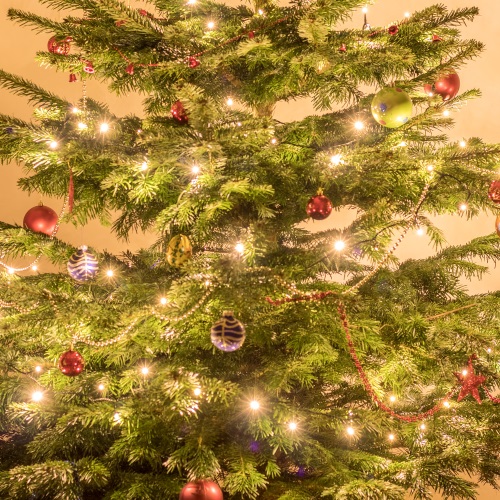 Is it possible to avoid this effect and make the lights appear as small dots? Perhaps a more sophisticated HDR tool can acheive it or do I need a flash setup for proper lighting?

To make the lights look rounder you need to open the aperture by selecting a lower f-number. You can also make the lights look a little rounder by slightly defocusing. To decrease the influence of the ambient lights you also need to shorten the length of your exposure(s) and/or reduce your ISO setting by more than enough to offset the wider aperture.

Dim the lights using a dimming electrical devise available at hardware stores. Depending on the type of lamps, you can find a dimmer that will do this deed.

Not the answer you're looking for? Browse other questions tagged low-light lens-flare or ask your own question.

16
How can you avoid/minimize lens flare when shooting into the sun?
13
How can I avoid a strange lens flare at bright lights when using UV filter?
4
How to avoid lens flare?
9
Is a 50mm f/1.8 or 50mm f/1.4 a good lens for portraits in low light?
2
How do you take a landscape photograph with "artistic" lens flare?
6
Can smudges and grease marks add to the problem of lens flare?
2
How can I avoid lens flare when shooting into the sun with a compact camera?
3
How can you photograph backlit scenes without getting lens reflections/flare?
4
With the attached photo, is this just lens flare?
0
How can I take a photo of multiple colored lights without them all becoming plain white spheres?