Google Maps's current view of Schiphol's runway 36R fortuitously includes five time-lapse images of a landing airliner. Oddly, each image of this white airliner has prominent red and cyan ghost images in its direction of motion. Nearby parked airliners and white runway markings lack ghosts, so the ghosts aren't due to chromatic aberration despite their blown-out-highlight fuzz. The moving airliner's shadow also has faint ghosts (definitely not blown-out highlights), so the red channel may be captured at a slightly different time than the green and blue channels. 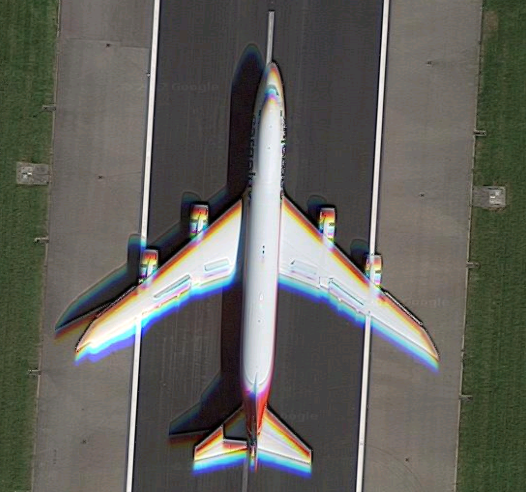 What kind of camera would suffer from that kind of rolling shutter? (Did the camera have a color wheel spinning in front of a monochrome sensor, like an early DLP projector?)

Very early color reconnaissance cameras did, in fact, use a color wheel in front of a camera with B&W film. At that time the resolution available with B&W was superior to that of color film. Developing labs that could easily process B&W film were also already in place at the air bases from which such cameras were flown. The resulting images were aligned by hand by the technicians at the enlargers in the darkrooms where they were combined. The chemistry for color paper only had to be added where the negatives were printed. The much more stringent requirements needed to develop color film were not needed in the labs where the film was initially developed soon after the plane landed.

Modern high-end digital cameras used for aerial/satellite imaging generally use three separate sensors each filtered for red, green, and blue (or magenta, yellow, and cyan) to do basically the same thing. In the case of very fast moving camera platforms such as satellites and high altitude aerial platforms, the ground track of the platform is moving at an appreciable percentage of the difference in position between the each of the three sensors as it takes its component of the frame. Images from each sensor are read in succession to even out the workload on the digital imaging processing system. The slight differences in position must be offset when the three filtered images are combined. It works very well for things that aren't moving. It even works for things that are moving but aren't moving an appreciable percentage of the resolution limits of the system per the time required to take all of the filtered frames for each image.

Notice in the google image referenced in the question that the spacing between airplane images shows that it is decelerating. You can see where the main and nose wheels created puffs of smoke behind the second image of the plane. The smaller puff from the nose wheel is forward of the larger puffs from the main wheels by a greater distance than that between the main and nose gear on the plane because the main wheels touched first and then the nose was rotated down as the plane continued down the runway.

There is a large distance difference between the image of the plane just before it crosses the threshold of the runway and the second image just after it has done its landing flare, which significantly reduces its forward speed, and touched down. In the succeeding images the plane decelerates at a more gradual rate between each frame.

Now, let's look at the difference between the first and last of the five frames: 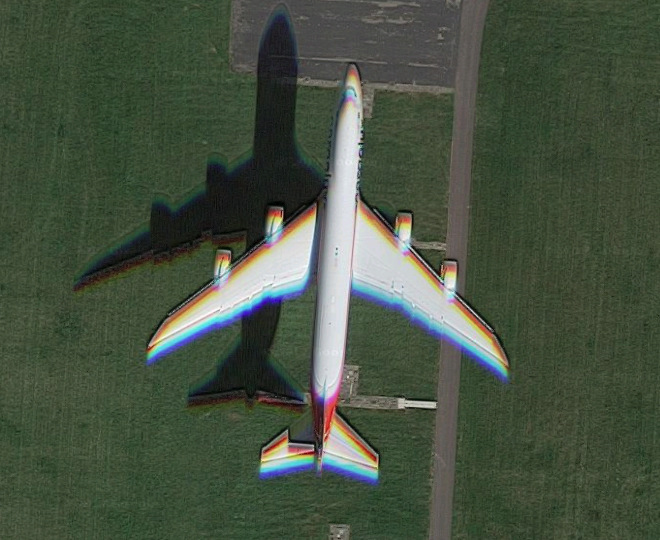 And the last frame as it is braking while rolling down the runway: 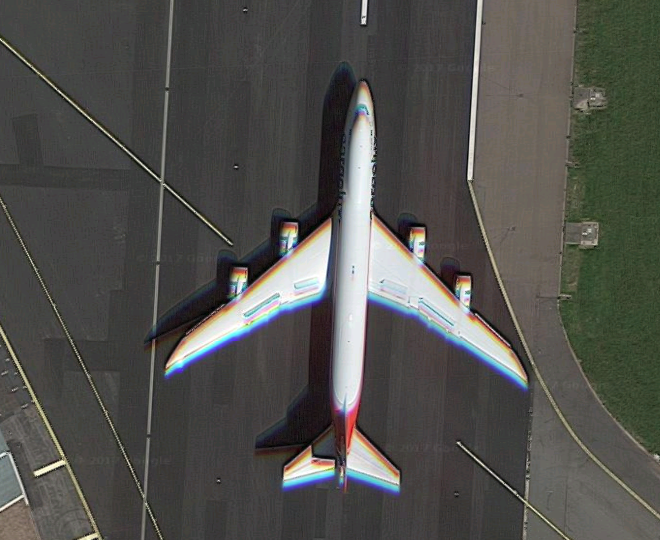 Satellite photos are often taken that way, with multiple linear sensors ("push broom scanners") that each detect different frequencies, mounted in such a way that they pass over a given point on the planet's surface at slightly different times.

If it's an aerial shot, that's weird.

Not the answer you're looking for? Browse other questions tagged motion-blur aerial-photography rolling-shutter or ask your own question.