How did first B&W enlargers work?

I made some researches online to try to understand how the first enlargers worked.
I think that first enelargers started being used in the 1880s, considering kodak produced its first camera in 1888.
What I really want to know is the main idea behind the enlargement process, what instruments played the most important roles (what kind of lens was used), and if the process had any impact on the quality and the sharpness of the image.

Why the past tense? B&W enlargers are alive and kicking to this day :)

For the first photographers it was a simple engineering problem: it was easier to enlarge your camera and contact copy from a large negative, than blow up the positive image.

In the quest to make big positives some truly humongous cameras were produced . Only with improvement in positive process in the early decades of the 20th century did enlargers become feasible. 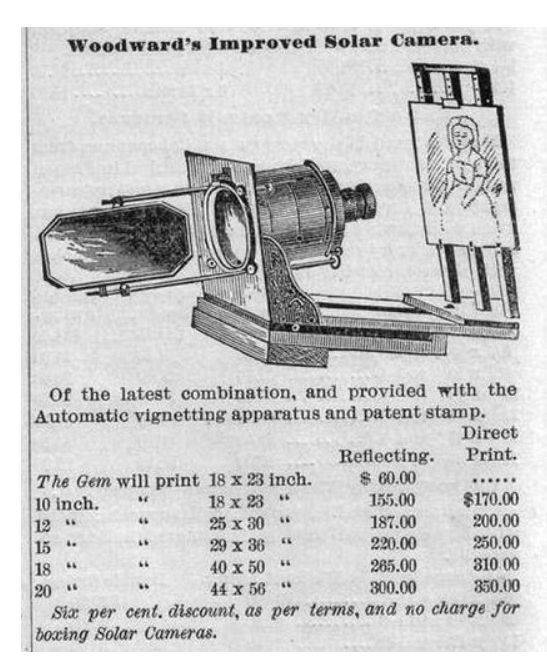 An instrument used for throwing the object to be traced, painted, or photographed on a canvas or other suitable material by the transmitted light from the sun.

To enable the photographic artist to print a picture on prepared paper, canvas, or other material of greater or less dimensions than those of the negative ordinarily used for such purpose, whereby he is enabled to use a more perfect negative produced by bringing the entire field of his picture within the focus of his instrument, and afterward throwing it up and printing it by concentrating the rays of light through the negative in the instrument and focusing the object on prepared paper or canvas, instead of printing by superposition in the usual way.

By the way: John Draper had proposed making enlarged copies of daguerreotypes in 1840. Alexander S. Wolcott patented an enlarger camera March 1843. Henry Fox Talbot patented a collotype enlarger making prints from paper negatives. None achieved widespread popularity. With the introduction of collondion negatives in 1850 Achille Quinet introduced the first vertical enlarger/camera. It required super long exposures. David Woodward’s solar enlarger solved this problem. This system used a mirror together with a condenser lens and focused sunlight on photo paper via using a copy camera lens. This device was also sold with a clockwork mount that followed the sun allowing shorter exposures. The Woodward design was modified by Desire Charles Emanuel van Monckhoven in 1864. He mounted a Woodward enlarger to the wall. Installed a more complex lens. and using a mirror to track the sun via a hole in the wall, made 17 ¾ X 23 1/4 inch enlargements. The exposure time was 2 hours.

The principles of a photographic enlarger have changed very little if at all since their inception. There is a light source, a carrier to hold the negative, a lens, and base board to hold the the paper (or other material coated with photosensitive chemicals). Allen Marcus provided the info for the reflected light source so i will limit my description to those with an electric light source.

All of this is on a carriage that can be moved up and down in relation to the base board at the bottom. The baseboard is where you put the easel containing the enlarging paper. Moving the carriage up or down will change the distance between the carriage and the baseboard and this will change the size of the image that is projected on the paper (i.e. changing the size of the endearment or the print you are making). There are adjustments on the carriage as well: one to move the lens closer to or further from the negative to allow focusing of the image and one to allow you to move the light source closer to or further from the negative to insure that the entire negative is being illuminated (this is to accommodate negatives of varying sizes). This is still the basic setup for today's enlargers.

Things that have changed are:

I am sure there are things I am missing but the point is the principles are the same now as they were then.

Just as in camera lenses, enlarger lenses have an optimum aperture/f-stop for sharpness. You should know what that sweet-spot f-stop is for each lens you use and try to use it for best results. A focusing aid or scope is very useful in obtaining sharp focus. It a scope with a mirror. You place it on the base board as the light is projecting the image through the lens. you can then look through the scope and see a magnification of the image and adjust your focus more precisely.

A Beginner's Guide to Enlargers

Not the answer you're looking for? Browse other questions tagged black-and-white enlarging or ask your own question.

2
How does enlargement affect resolution in the digital negative process?

3
How can I remove pen marks on a photograph?
3
How is Perfect Resize compared to Photoshop for image enlargement?
2
Easel hangs off the enlarger baseboard - how to keep the easel level?
2
Enlarging - how to increase exposure time without closing the aperture too much?
3
How to get the largest size file possible from my DSLR for a large advertisement print?
0
How do I maintain a high resolution when cropping a photo I want to enlarge after post processing?
1
Color negatives came out blank