I'm starting to study cameras and lenses. By reading explanations and watching videos on convex lenses, I learnt that they make parallel light rays converge to a single point called the focal point.

Yes. The separation of different wavelengths of light is called dispersion. Different wavelengths of light refract at different angles because the refractive index of a transparent medium is frequency dependent. We often describe different materials, such as crown glass, flint glass, diamond, water, etc., as having "an" index of refraction, but that singular index is just representative of the refraction at a single wavelength. For instance, at Wikipedia's List of refractive indices, many of the materials' indices are specified at a wavelength of 589.29 nm. 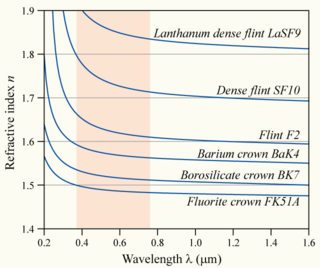 Plot of refractive index vs. wavelength of various glasses. A material's dispersion is roughly the slope of the line through the refractive indices at the boundary of the shaded region (optical wavelength) for a particular material. By DrBob, from Wikimedia Commons. CC BY-SA 3.0

Dispersion is what causes longitudinal chromatic aberration in lenses (see also, What is Chromatic Aberration?), such that different wavelengths of light are brought to focus at different focal lengths. 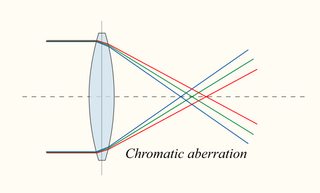 This is corrected by marrying two (or more) pieces of glass with different Abbe numbers. For instance, an achromatic doublet uses a crown glass convex element with a flint glass concave element to reduce the variation in the focal lengths of the optical light wavelengths. 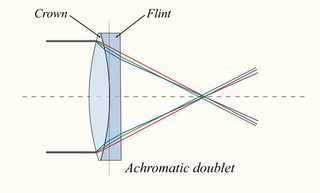 Light from a far distance object, like a star, arrive at the lens, as parallel rays. As they transverse the lens, they are forced to change their direction. They bend inward, we call this refraction from the Latin to bend backwards. We can draw a trace of these rays; they trace out the shape of a cone. What we find is, the apex of the violet cone of light forms closer to the lens then the green, yellow, orange, red etc., in other words images are formed downstream but each color at a different distance. Worst, the red projection distance being the greatest is larger than blue image. We can’t focus on but one color at a time. The other colors are therefor out of focus. We call this chromatic aberration (color error).

What I have just described is called longitudinal chromatic aberration. We can mitigate this by constructing a lens by sandwiching two lenses together, each with an opposite chromatic aberration. We use an achromatic doublet (English for without color error). A strong convex (positive power) lens combined with weak negative (concave). Additionally the glass used will be dissimilar for each. Such an arrangement brings the red and the violet apexes together. We are not finished.

We bring the red and violet together but their paths through the lens system still have different lengths so the focal lengths of each are a minuscule off (different). This is called transverse chromatic aberration. The result of this focal length difference, when we look at a star we see objects fringed by a rainbow of colors.

Don’t think that’s it. All and all there are five more monochromic aberrations to deal with.

But, camera lenses are not simple lenses — they're complex combinations of different elements specifically designed to minimize this and other aberration (see What image-quality characteristics make a lens good or bad? for some other examples).

Look for lenses designated as achromatic or apochromatic as an indicator that the design particularly focuses on minimizing chromatic aberration — sometimes with lens names containing things like "APO".

Not the answer you're looking for? Browse other questions tagged focus focal-length optics chromatic-aberration or ask your own question.

49
What image-quality characteristics make a lens good or bad?
20
What is Chromatic Aberration?
2
Do convex lenses make light from different points converge to different points?