How does a film camera perform exposure compensation?

I understand that, on a digital camera, "exposure compensation" actually alters signal amplification, similar but not identical to changing the sensitivity.

In general, this is not how the term is used. Instead, "exposure compensation" means: tell the camera's exposure program in automatic exposure modes to target an exposure brighter or darker than the meter reading. (More at What is exposure compensation?, and at How do DSLRs figure out what aperture to select in P mode?)

One way the program may respond to this is by altering the amplification, increasing the effective ISO. (More at How is ISO implemented in digital cameras?) It can also change the shutter speed or aperture — but that will depend on the mode.

On a film camera, changing the amplification is not an option, so to change the exposure, shutter speed or aperture must change. However, you might not perceive them changing, because the camera doesn't actually stop down until the shutter clicks, and it's hard to hear the difference between, say, ¹⁄60th vs ¹⁄₁₂₅th of a second.

Nikon actually includes the "program chart" for the F6 in the manual: 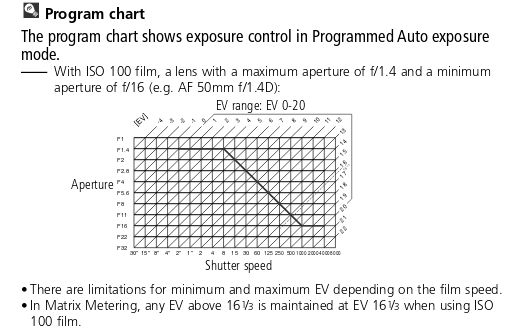 … so you can see exactly what it does. For example, if the meter returns "EV 5", you'd get an aperture of f/4 and a shutter speed of ¹⁄₆₀th. And, you can see that it's really quite a simple algorithm. As noted in this answer, some cameras let you select between different programs. On some entry level cameras, a setting like "sports mode" actually means "select a program which prioritizes high shutter speeds" — even if there's no direct, named control over the program. Generally, though, if you really care a lot about a particular exposure factor, you would use Aperture or Shutter Priority.

It's not the case that "exposure compensation actually alters signal amplification".

There are only 3 ways to control exposure: aperture, shutter speed and ISO. Exposure compensation is not a magical additional exposure control. It just tells the camera to change the exposure x number of stops by changing the aperture, the shutter speed or (in the case of a digital camera) the ISO.

Actually, "exposure compensation" is a misnomer in my opinion - it should be called "meter compensation". It works (almost) the same way on a film camera as it does on a digital camera. When you point your camera at a scene, and the camera meters the scene at, say, EV 16, if you set exposure compensation to +1, what you are doing is telling the camera to assume the scene is 1 EV less (i.e. EV 15) and to expose accordingly. Depending on your exposure mode (PASM), the +1 exposure is then achieved by the camera altering the aperture or the shutter speed or (in the case of a digital camera) the ISO so as to make an exposure as if the scene were EV 15.

(As noted by Michael in the comments, it's possible that the camera may adjust more than one of the exposure controls in order to achieve the desired exposure compensation, e.g. it may adjust both aperture and shutter speed at the same time.)

I imagine the reason you can't hear or see any difference in shutter speed or aperture in your test case is because everything is happening too fast anyway. It's probably worth explicitly stating that, regardless of aperture setting or exposure compensation setting, the lens diaphragm remains fully open until the moment the shutter release button is pressed.

The same way a digital camera performs exposure compensation (EC): it biases the meter calibration in the direction and amount entered so the resulting exposure variables selected by the camera result in less or more exposure than would otherwise be the case.

The reason we sometimes need to do EC is because most cameras can't tell the difference between a black cat in a coal mine and a white cat in an avalanche. Particularly when using a camera with a monochromatic light meter (pretty much all consumer/pro SLR cameras until about 2010 or so), the camera will try to expose every scene as a medium gray. With newer color-based light meters and library-based exposure algorithms, some cameras are getting better at "guessing" the difference in difficult lighting. But the camera still can't read the photographer's mind about what part of the scene we want to be exposed as 'medium brightness'.

In the case of film cameras either the shutter time (Tv), aperture (Av), or possibly some of both if using Program exposure mode, are altered to accomplish the higher or lower exposure. We can even do EC with a film camera that has no [+/- EC] button or dial. If we are shooting with ISO/ASA 200 film in manual exposure mode and we change the film speed setting to 'ISO/ASA 100' the meter will give a one-stop lower reading for the same amount of light than when it is set at ISO/ASA 200. Any of the camera's automated exposure modes will overexpose the 200 speed film by one stop by changing Tv or Av to return the calculated exposure to the middle. It has the exact same effect as using [+1 EC]. Setting the film speed control to ISO/ASA 800 with 200 speed film will have the same effect as using [-2 EC]. In either case, don't forget to change the film speed setting back after you take your picture!

Most of the "shutter" sound you hear with an SLR is the movement of the reflex mirror before and after the exposure. The mirror movement before and after the exposure takes the same amount of time regardless of the shutter time used. Also keep in mind that all shutter times take the same amount of time for each shutter curtain to transit the film plane. The only difference is in the length of delay between the movement of the first curtain to begin opening and the movement of the second curtain to begin closing. At shutter times shorter/faster than your camera's X-sync speed, the second curtain begins to close before the first curtain is fully open. This results in a slit of varying width between two curtains as the second curtain "chases" the first curtain across the film plane

If you're looking at the diaphragm opening before the shutter button is pressed to take the exposure, it is being held open at the lens' maximum aperture setting regardless of the aperture value selected. This allows the most light possible to enter the camera for focusing and metering. The aperture is not stopped down until the shutter button is fully pressed. Remember those 50 milliseconds needed to raise the mirror? That's more than enough time for the camera to stop down the aperture. By the time the mirror drops back down after the exposure, the aperture is back to the fully open position as well.

In the case of digital cameras either the Tv, Av, ISO, or a combination of them are altered to accomplish a higher or lower exposure when EC is used. Sometimes using EC alters the camera's ISO setting that controls sensor amplification, but often it does not. Whether using EC results in changing the ISO and/or Tv and/or Av all depends on the user's selected exposure mode and settings as well as the camera's program line for a specific scenario and exposure mode.

There are only three things that determine exposure: Tv, Av, and ISO/sensitivity. This is just as true in a digital camera as it is with a film camera.

We can alter 'exposure/brightness' when post-processing a digital image. We can just as easily alter the development time of film in the darkroom to increase or decrease the density of the negative. Neither modification after the fact alters the amount of light that was captured by the film or sensor during the actual exposure event. The only difference is that with digital when we alter 'exposure/brightness' in post-processing we do so non-destructively - the actual raw data collected by the sensor remains unchanged. In the case of film, once we have developed a latent image to create a negative there is no going back and doing it again with a different development time.

It seems that some folks think that entering an EC value results in the raw data from the sensor being processed differently than if the same ISO were selected with a different EC value.

This is not the case at all!

What matters with regard to sensor amplification is what the ISO is set to when the image is taken. Period. How a particular ISO is selected matters not: whether chosen by a manually entered ISO setting or by an automated program resulting from use of EC, a specific ISO value will always result in the same amount of sensor amplification. ISO 100 has the same signal amplification regardless of whether EC is set to -5, 0, or +5 at the time the image is exposed.

Not the answer you're looking for? Browse other questions tagged film exposure-compensation or ask your own question.

74
How is ISO implemented in digital cameras?
26
What is exposure compensation?
16
How do DSLRs figure out what aperture to select in P mode?
0
How to know correct exposure for RAW shooting when camera show JPEG Histogram
1
Shutter speed and overexposure