Will the lens be in the way of the mirror at any focal length when taking a picture?

Will the lens be in the way of the mirror at any focal length when taking a picture?

No. The back element of the Sigma 18-200mm does not intrude far enough into the lens mount's throat, at any focal length or focus distance, to interfere with a full-frame body's mirror (whether it's a film body like the F70, or a FX digital body). There are very few lenses made for the F-mount (including 3rd party), other than a small handful of very wide-angle lenses that you probably won't encounter, that interfere with a 35mm body's mirror.

Even though your question didn't ask about this aspect, I feel it's important to note that the "DC" is Sigma's designation for lenses designed for APS-C sensor bodies. That is, it's intended for use on Nikon DX, Canon EF-S, Pentax DA, Sony E, etc., bodies. As such, it projects a smaller image circle, sufficient to cover the diagonal distance of a APS-C sensor, but not necessarily enough to cover a 35mm full-frame sensor that is 1.5 times larger than the largest APS-C sensors.

This means that the Nikon F70 will "see" outside the projected area of the lens, likely producing extreme vignetting (at best) in the corners, or large black areas on the sides (more likely).

In this image (borrowed from Michael Clark's answer to a similar question), a lens with a Canon EF-S mount (i.e., made for APS-C sensor cameras) is mounted on a full-frame Canon EF body. The white square is what an APS-C sensor would see. But because the of the much larger full-frame sensor, the full width of the image circle, and beyond, is captured on the 35mm format sensor. 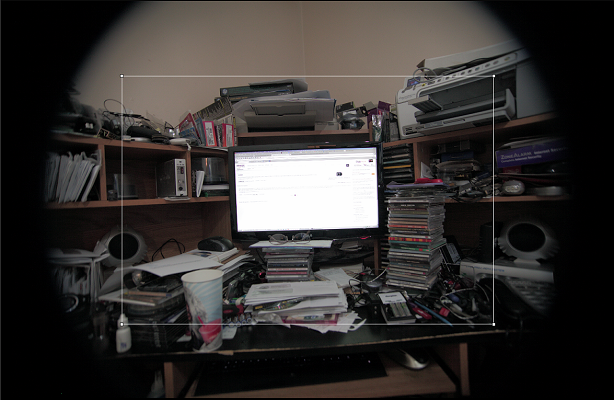 Francois Malan published an excellent article at Photographylife.com, Using Nikon DX Lenses on FX Cameras. Using a Nikon 35mm ƒ/1.8G DX (crop) lens on a FX (full-frame) body, he demonstrates surprisingly little vignetting in the corners at wider apertures. It's still noticeable, but perhaps somewhat correctable in post, and perhaps a desired effect (if that's what you're going for).

In conclusion, when mounting a Sigma 18-200mm ƒ/3.5-6.3 DC lens on a Nikon 35mm film, or FX DSLR, body, you should expect to see the edges or corners of the lens's image circle, somewhere between the extreme's of Michael's EF-S lens on a EF body, and Francois Malan's 35mm DX lens on an FX body. YMMV.

Not the answer you're looking for? Browse other questions tagged lens nikon sigma full-frame dx or ask your own question.

2
Will a macro extension tube eliminate the cropping of an APS-C lens on a full-frame sensor?