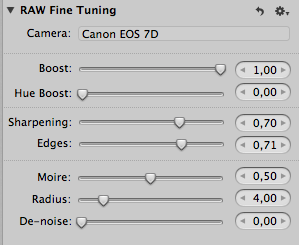 13
Why does Picasa open RAW images correctly then desaturate them?
12
What camera settings may affect a RAW photo?
7
Why do my photos look different in Photoshop/Lightroom vs Canon EOS utility/in camera?
7
How do I decide between "RAW as Master" and "JPEG as Master" when importing RAW+JPEG into Aperture?
3
How to use Lightroom and Photoshop Elements together?
1
Apple Aperture, raw files, and white balance?
0
Raw photos in Aperture 3
-2
Wrong color in Camera Raw

5
Reducing chroma noise in Aperture
4
How should one deal with 'hot' pixels on Canon T1i, either in-camera on in Aperture?
7
RAWs looking massively different in Aperture/Mac OS Preview compared to camera preview and (Canon) PictureStyleEditor
1
Adobe lightroom changes colors after importing pictures
4
Why do my images look different on my camera than when imported to my laptop?
1
What white balance should be selected if the photo is supposed to completely surround the viewer?
3
Should I use ProPhoto RGB?
6
How do I fix the color in this photo using Darktable to match the out-of-camera JPEG?
3
Why does color hue change on different exposures?
7
Pictures uploaded to Facebook display wrong colors, but only in Firefox