How does imaging plane's distance affect the picture in a pinhole camera? 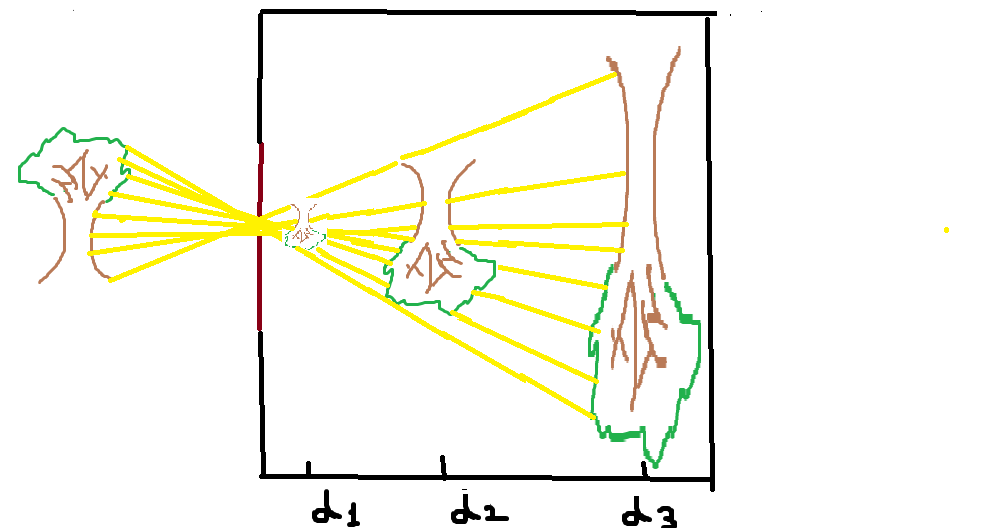 My guess is that the picture will be taller and larger with increasing distance, and smaller and thinner with decreasing distance. It shouldn't be that sharp when it's very close to the hole ( due to overlapping rays? ),then it will increase its sharpness till a certain point( focal point?) and start to decrease it again (due to far apart rays?) after it.
I'm supposing the same exposure time. It would also be interesting to know if increasing exposure time as increasing distance can avoid loosing sharpness.

The image size increases linearly with respect to distance between the pinhole and the film plane. The image gets larger in all dimensions.

The image gets sharper as you increase the distance between the pinhole and the film plane, but after a point, the effects of diffractions become important, so here is an optimum pinhole size (alternatively, for a given pinhole, there is an optimum imaging distance).

Since exposures will probably be long, you probably need to take into account reciprocity failure.

We construct a light proof box with a pin-hole entry aperture. The inside back wall is a white screen. Light from every point on objects within sight; pass through this pin-hole aperture. A ray trace of the light from each subject point from pin-hole to the screen, discloses that the rays trace out a cone of light. The apex of this cone is the diameter of the pin-hole aperture. This image forming cone plays on the screen projecting a dispersed circle of light.

If we play around with the diameter of the pin-hole and the distance pin-hole to screen, it becomes obvious that the size and brightness of the projected circle of light is function of geometry. A sharp image is obtained by making the aperture diameter sufficiently small.

However, when light passes through small apertures, it does not obey the laws of geometrical optics completely. Instead, some of the image forming light is scattered. This is because, a percentage of the light rays skim by the boundaries of the aperture. We would expect that all rays that hit near the rim should be stopped. In actuality light waves like sound waves bend around obstacles. Some tend to fill the voids behind sharp edges. This is called diffraction and this generates disorder that jumblers. Additionally some light rays interfere with others near the boundary and the result is bands of darkness at some points and increased intensity at other points. This is called interference. It is the twin demons of diffraction and interference that degrades.

As a result the projected disk, when viewed with a magnifier is seen as an indistinct circle juxtaposed with other circles. These, the tiniest elements of an image that carries intelligence are named “circles of confusion and sometimes Airy discs.

The size of the circles of confusion determines whether we declare the image sharp or blurred. As we increase the projection distance or enlarge the pin-hole, the size of the circles of confusion enlarge. An image will be declared sharp if the observer sees not circles but points of light. For the average viewer, observing from standard viewing distance, the circle size must be ½ mm or smaller. Under these conditions, the resulting image will appear acceptably sharp.

It becomes obvious that increasing distance and or increasing pin-hole diameter will degrade the image as the circles of confusion increase geometrically. As to prolonged exposure and sharpness: We are dealing with light sensitive materials. Edge effect interaction is a phenomenon whereby adjacent light sensitive chemical, not exposed to light are rendered developable simply because they are adjoining. This action get worse when the exposure is prolonged. Photo materials light-pipe: Exposing light travels within the emulsion and prolonged exposure times exacerbate and the developed circle is artificially enlarged. The bottom line is, prolonged exposure will aggravate.

Not the answer you're looking for? Browse other questions tagged pinhole-cameras image-plane or ask your own question.

12
How to calculate the optimal pinhole size?