How to read and interpret this MTF Table in a Lens Specification?

I have a camera lens specification that shows the following table about the MTF.

I have a few questions about how to read this chart: 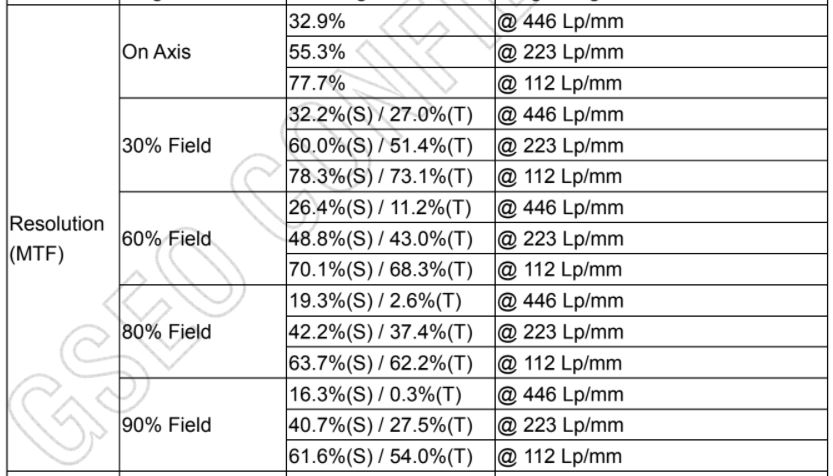 'On Axis' means the exact center of the field of view where the optical center axis of the lens intersects the test chart.

(S) is Sagittal. That means lines drawn from the center of the field of view towards the edges. Sagittal lines look like spokes on a wheel.
(T) is Tangential. Tangential lines are lines that are perpendicular to the Sagittal lines.

Lenses often have differing acutance rendering (S) and (T) lines. The difference between the (S) and (T) is often described as a lens' degree of astigmatism.

The numbers on the third column describe resolution as percentage contrast between alternating lines of white and black lines. Perfect resolution would result in 100% contrast. A result of 0% would indicate that line pairs are imaged on the sensor as an even gray color with no distinction between the black lines and the white lines.

The numbers in the fourth column describe the pitch of the line pairs of white and black lines as they would be measured on the surface of the imaging sensor or film.

At 60% field we see that with 223 LP/mm the lens is capable of 48.8% contrast on line pairs oriented in a Sagittal direction and 43.0% contrast on Tangential line pairs. This means the "spokes" of a wagon wheel imaged with the lens would have slightly more contrast than the "rim" of the wheel if the hub was placed at the center of the field of view, as shown (at a much more severe degree of astigmatism) in the center figure below.

I always maintained that charts like this are very limited as to their helpfulness. That being said: The camera lens projects a circular image. The center portion is called the “circle of good definition”. For most applications, only the center portion is photographically useful. The typical camera contains a mask that blocks off the substandard outer boundaries of this circle. As an example, a 50mm lens might project an image 100mm in diameter however, the useful portion is 45mm in diameter. That’s OK because the full frame format measures 24mm height by 36mm length. The diagonal of this rectangle measures about 45mm, so we can, after all use this lens.

This circle of good definition is best at the center (the axis) of the lens. As we examine an image from axis to edge, degrading is evident. Test are made, we image test charts consisting of closely spaced parallel lines. We examine images of these parallel lines to determine the ability of optical systems to resolve lines (see spaces between the ruled lines).

The target charts have sets of lines ruled parallel to a line drawn from the center to the edge of the image. These are called “Sagittal” lines. Lines drawn perpendicular to a radius line are called “Tangential” lines (sometimes called “Meridian” lines). Anyway, because these lines, due to their direction may image differently, we divide S/T to get an average.

Not the answer you're looking for? Browse other questions tagged mtf or ask your own question.

37
How do I interpret an MTF Chart?
2
How can I compare the MTF results on Photozone from the Pentax SMC DA* 300mm with similar lenses from Canon and Nikon?
2
Can a lens's bokeh be predicted by reading an MTF chart?
1
How can I compare MTF50 to a manufacturer's MTF chart?
6
For MTF, why does 10 represent contrast while 30 represent resolution?
4
what does RIH mean in an MTF chart