How to capture a swinging pendulum?

A pendulum when reaching the extremes stands still for a moment, allowing us to see the details of the bob, and gradually increase its velocity towards the equilibrium point. Therefore, its trace of trajectory is blurred in our eyes.

Long-exposure can portray the trajectory, but not the detail of the bob: 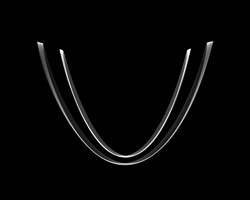 Time lapse, on the other hand, shows too much detail that the trace of trajectory isn't portrayed: 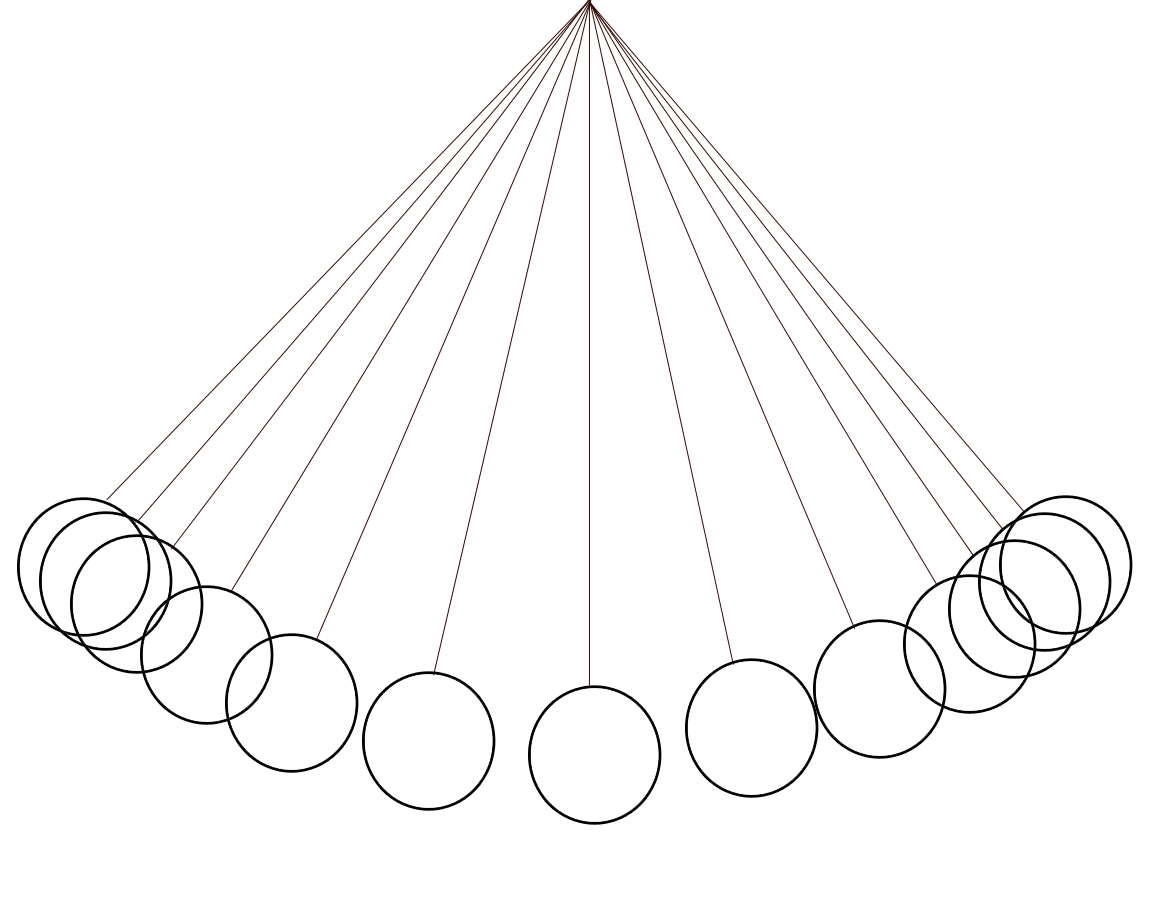 This one is closed to what I'm looking for, but it's not in direct view. The transition is not really smooth. 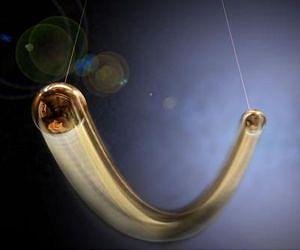 This one is closer, but it only shows the bob once, not in both extremes like the previous. The trajectory is also faded.

Q: How to portray these in one image:

I can edit existed images/video or setup things.

Let's look at the last picture.

So you could try:

Here's a related example I took a few years ago. 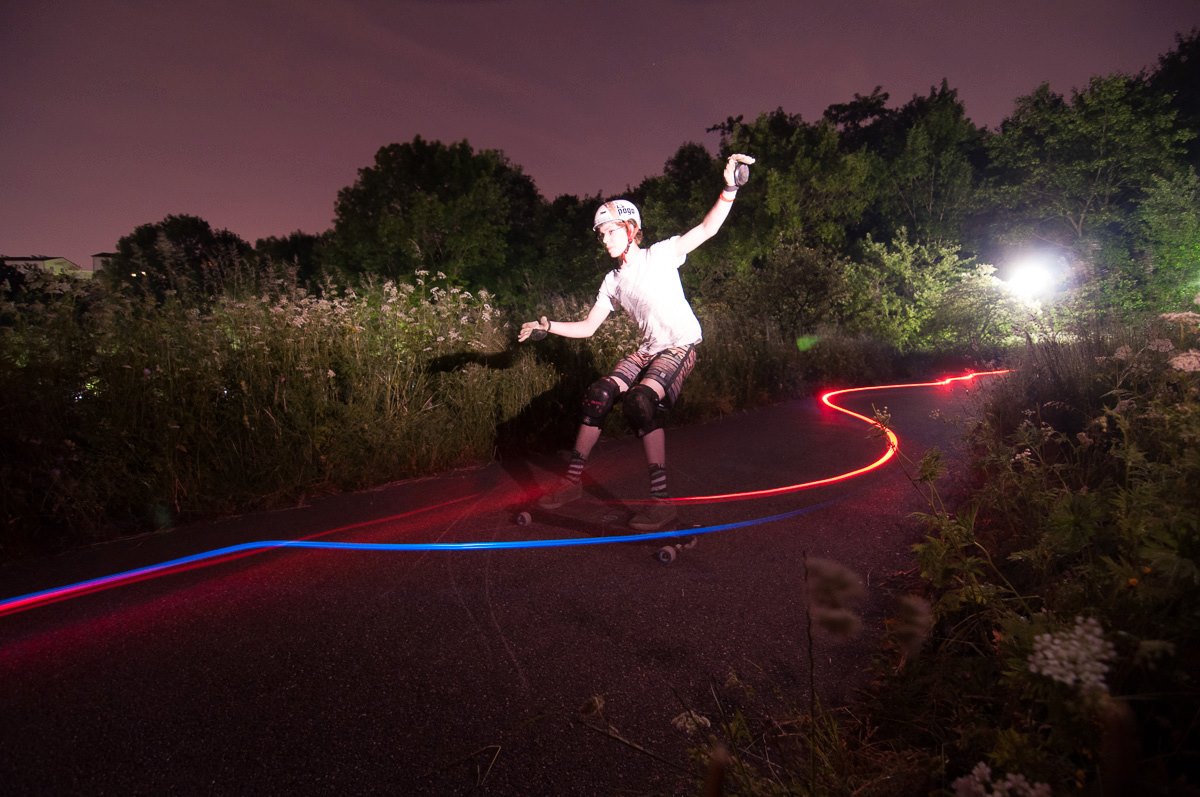 I wonder what would happen if, in addition to the steps offered by this excellent answer, you would use a long enough exposure (say 5-10 minutes) for the length of the pendulum's travel to decay appreciably while using a very dim constant light source? (Or even two, one from above and one from below so that you could flag both of them from shining towards the background.)

You would need to do both of your flash 'pops' as soon as possible after opening the shutter. Perhaps get synced to the rhythm of the pendulum before opening the shutter. That way you capture the bob with the two flash bursts at the very extremes of the arc of travel recorded in the long exposure.

As the pendulum's arc decays, the bob would spend more and more time closer to the center of the arc as it ceases to spend any more time on the ends. The period of oscillation remains constant, but the distance travelled decreases which means the speed through the bottom of the arc would also be decreasing. This might help equalize the brightness of the blurred trail in the middle compared to the extremes.

Consider adding a light source to the bob itself, such as an LED. Set your exposure for several periods of the pendulum, and flash your external light source at the extremes. This attached light source should trace a clear path, and the flashes should illuminate the extremes.

LEDs are fairly directional, so you should be able to control how much light leaks onto the bob. The LED can be powered by a small battery attached to the bob, or fed through the pendulum's cable

Your problem, in reality, is a bit more technical than it looks at first glimpse.

It seems you need these specific requirements:

The exposure should reflect the velocity, so at point (1) it should look less bright because is passing faster, ant point (2) should be brighter, because it is moving slower, and you want to see the object clearly in (3) at the extremes. 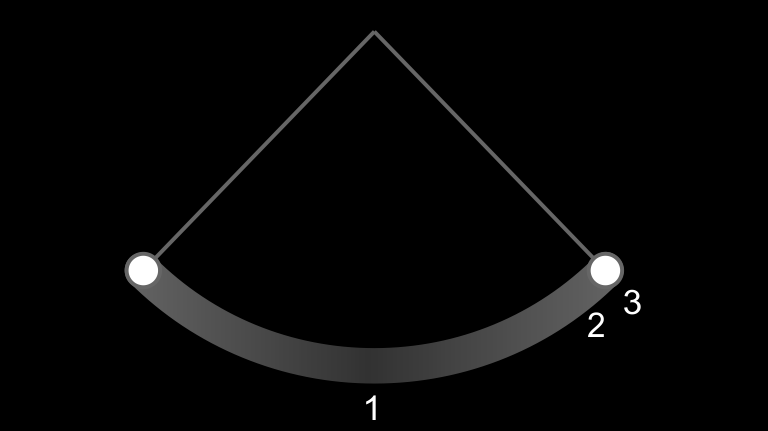 You do not want to use a single source of light at the center because you will have a hotspot at the center canceling the "speed" effect. This light will expose more at the center if it is either far enough or big enough. (Probably one big diffuse light can work) 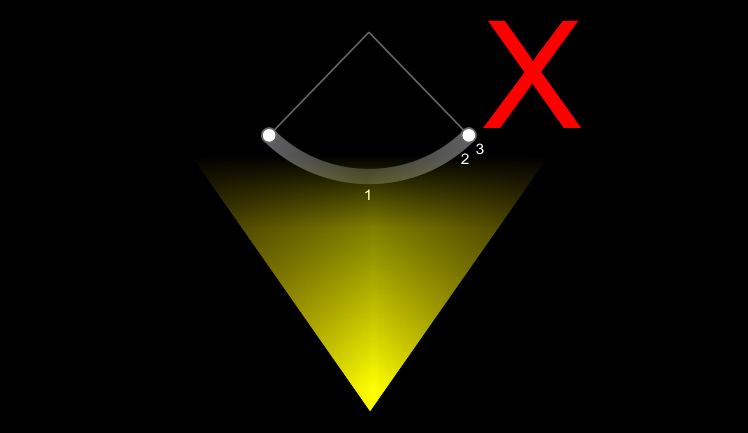 What I recommend is that you exaggerate this speed effect using two lateral lights.

So the effect is more visible because you will have a bot more light when the pendulum is at the extremes. 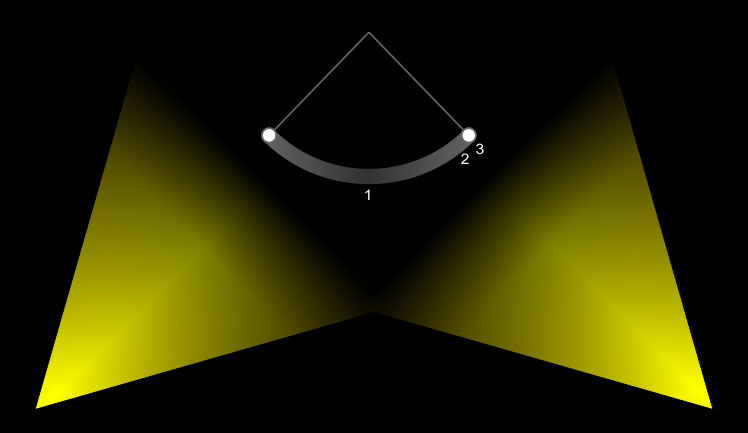 But here is the real technical problem.

To expose exactly the object at the edges you probably need a light sensor trigger, probably an infrared one so this light does not add to the photo. 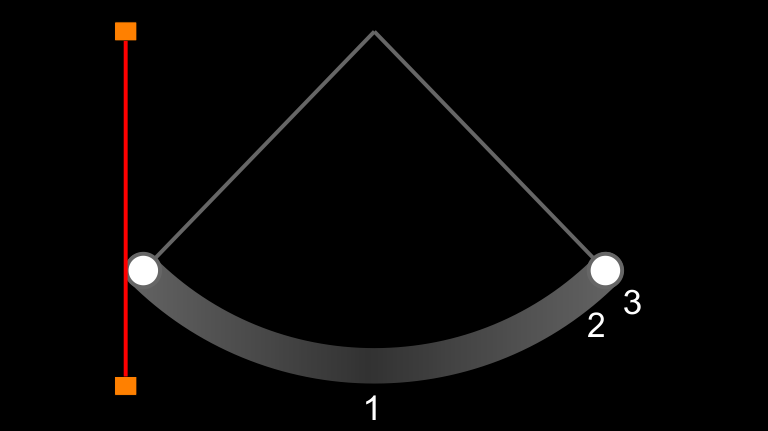 But you can overcome it in several ways.

Manually triggering a flash at the extremes (I then recommend a soft trigger, probably using remote triggers like Yongnuo 603 which is really cheap) because the built-in button on a flash, the test button usually is hard to press, for safety reasons)

I would not recommend a very long exposition for one reason, it probably can detect the decay of several passes, increasing exposure at the center. Of course, this decay depends on how massive is the pendulum.

Try to limit this exposition to 2-3 passes only, so do not use very dim lights.

Some lights can have a flicker effect, so take that into account.

If you want to have an image of a single swing to represent the velocity and trajectory, I would make a small adjustment to @Eric excellent answer.

Use a flash with second curtain sync, so you can eliminate any 'extra' exposure to the continuous light by stopping the exposure when you hit the starting point in the swing. The manual flash trigger would only be needed for the apex farthest from the start of the swing. This would give a more even light distribution to match the swing. A random exposure time means the pendulum will be exposed for the duration of the exposure, and thus appear brighter in any parts of it's trajectory that is exposed more (within reason, a very long exposure time as @Michael Clark suggested would effectively eliminate this effect)

For example, if the exposure stops when the pendulum is halfway through it's swing, and resulted in the first half of the swing being exposed for twice as long as the second half, this will be noticeable in the resulting image. The more swings, the lesser the effect, but it also means you will see the decay of the swing, which I assume you don't want. If you do, then follow Michael's advice.

For a software answer as opposed to all of the excellent photographic answers I would suggest taking a high resolution video of a well lit pendulum through at least 1 full cycle.

You can then split the video into frames, (I would use Image Magic convert for this), ensure that you have an equal number of frames of each point in the cycle and then exposure blend, (Hugin), but with multiple copies of the two end images, a little playing about should get the results you need. Where the pendulum is moving fastest it will be dimmest.

Both ImageMagick & Hugin are free, gratis & open source and available for most platforms.

Not the answer you're looking for? Browse other questions tagged flash photo-editing studio-setup motion-blur motion or ask your own question.

0
How to Improve Visibility of Photos for an Article

5
Can I capture motion-trails with a point-and-shoot camera?
4
Quick Motion Capture
14
How does Gigapan Handle Movement?
5
What camera feature to look for to capture moving subjects clearly?
4
How does one track a shot where a car moves towards the camera but the background is blurred?
5
How can I capture blurry movement and freeze a subject in the same photograph?
0
How can I capture motion while maintaining the sharpness of the main subject with an iPhone?