Can a lens be too heavy for a given camera? [duplicate]

I currently own a Canon 200D and a friend of mine lent me a 24-70 F2.8 lens for playing around. The lens weighs 800 grams, which is double the weight of the camera itself. Putting it on I was slightly afraid of bending the lens mount if I hold the camera body without supporting the lens with my second hand.

Your fears are absolutely justified. But, digging in…

The lens mount itself is bolted to the camera’s lightbox. In order to damage the mount, we would need to stress it to the point of damaging itself, the bolts holding it to the lightbox, or the lightbox itself.

Now, the lens mount can probably support a good deal of weight when pointed towards the ground. At this angle, any force will be evenly distributed along all of the connecting components. But I'd worry about the force being applied at an angle (as would be applied by pointing the lens parallel to the ground and not supporting it).

The farther the weight is from the mount, the more force will be applied to it, torqueing it downward. So, you have little to worry about with heavy, short lenses.

But, when using long and heavy lenses, well, that’s when I’d start to worry. I’d expect to damage lighter/less sturdy materials before more sturdy ones – ie I’d expect a Rebel’s mount to fail before a Pro model. I haven’t been able to dig up any actual fail weights – as not many are apt to want to destroy a camera for the test.

So, to play it safe, when using a large or heavy lens, always support the lens. Your left hand should support the weight of the rig - your right hand shouldn't need to support any weight at all. If the lens has the option of using a tripod collar, you should be using it with a mono/tripod as opposed to mounting to the camera body.

All that being said, lens mounts are very sturdy. You would probably need to be holding just the camera using a 400 f/2.8 to get anywhere near the force to really damage the mount. Doing something like this is either an exercise in science or stupidity. So if you do it, publish your results.

You should be just fine holding it by the camera alone, it's the same effect as having your camera on a tripod.
A 24-70 F2.8 is also relatively short so it won't be asking to much of your lens mount.
In general lenses that are really to heavy or to long for the camera to support by itself will have their own tripod collar.
Lenses around 1000 grams aren't that uncommon and mostly come without such a tripod collar.

A lens that does need more support is for instance the Canon EF 70-200mm f/2.8L which weighs 1490 grams and comes with a collar.

I wouldn't be concerned on a 200D. It's a good sturdy body, so should have no issues with a lens of that weight.

The 200D has an aluminium chassis, which will be easily strong enough to hold a lens of that size and weight. A friend of mine uses a 600D which I believe has the same armature, and has used some very hefty lenses on it without any need to support the lens, and in many cases they are tripod mounted without an extension mount for the lens itself.

I used a 300mm on my Nikon which has a similar chassis with no detrimental effect. That lens is about 1.2kg, give or take a gram or two.

On a body which is all plastic, I'd be concerned about such a weight, but so long as it has a decent casting as the body armature, you should have no issue. I have a lovely 200mm which I want to use on my digital camera, but the only digital body I have is a Samsung NX1000, which is plastic throughout and wouldn't stand up to it.

Movement will be a factor as well. If you have the camera mounted stationary, the force will be applied through a constant vector, but if you start moving the camera around much, that is where the torque applied to the mounting plate will start to shift and could cause damage. That said, for that size lens, I doubt you're going to be tracking any fast moving objects so that probably won't be much of an issue.

I have to say, kudos for thinking into this. A bit of forethought is often the difference between a knackering your device or not. For peace of mind, holding the lens with your second hand is a wise move, but I think in this case it is pretty unlikely to cause any damage.

Q: I was slightly afraid of bending the lens mount if I hold the camera body without supporting the lens with my second hand.

Bending the lens mount on the camera is unlikely, something else is virtually certain to give out first.

Videos at the end of this answer show cameras moving over 12 feet per second, propelled by some of the world's fastest robots - you can't move that fast.

Snapping off a lens is theoretically possible but not seen in these videos, even using unsupported lenses.

DPReview interviewed LensRentals.com Part 1 and Part 2 about a dropped Sony FE 70-200mm F2.8 GM, simply dropping your lens or camera should be your biggest concern.

All but the smallest cameras will have a lanyard or a means to attach a camera strap, larger lenses have a means to attach a strap also. Straps, unmounting your lens and a good camera bag with plenty of padding are all great insurance against drops.

While the strap may well prevent dropping your equipment they won't prevent a fall.

Since the lens mount on the camera body is a metal ring it is quite resistant to bending or damage, of greater concern is the mounts on the lens itself, and what the lens' mount pins attach to.

Camera and lens manufacturers seem reluctant to publish specific figures about torque or weight capacity for their mounts. Searching the Internet turned up no specific info (other than a Wikipedia page that says that the pins on a bayonet mount, which is the connection style most used, are the weakest part of the mount itself; but what the mount is attached to is also important).

See LensRentals.com's Blog post titled: Assumptions, Expectations, and Plastic Mounts where they discuss plastic mounts or the plastic lens body to which metal mounts are attached.

In the event of Link rot I'll quote what Roger Cicala describes as incorrect assumptions:

"I take apart lenses all day every day, so I was rather amazed to find all these facts spoken so dogmatically by people who claimed them to be absolutely true."

Note that the most expensive lenses are mostly metal and supported with rails.

Now for the photo. 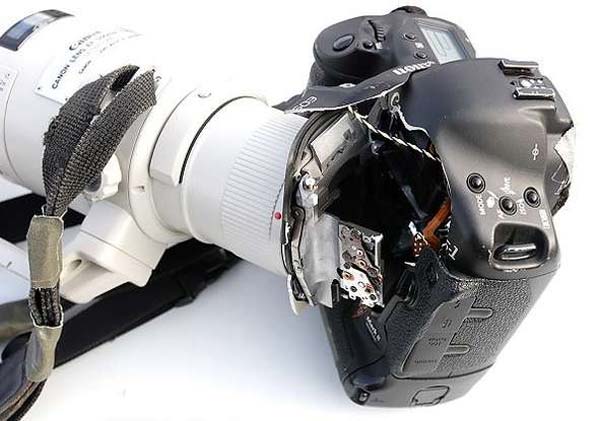 Check out their YouTube Channels for many camera punishing videos.

[Disclaimer: No mounts were bent in the making of those videos.]

In general, if the manufacturer feels that the lens design is excessive for the cameras they produce they install a tripod collar/lens foot. This allows the lesser weight of the camera body to hang from the heavier lens instead of the other way around.

If it is a lens that has a tripod collar/lens foot then you are likely pushing your luck if supporting the weight from the camera body with all but the top line pro bodies... and even then it may be asking too much. If the lens itself is equipped with strap mounting points there's a reason for it; it's probably too heavy to safely hang from any camera body. I once bent the lens mount locking pin by letting a 500/4 hang off of a D3 (might have been a D4). And I have had the lens mount screws work loose on more than one camera/lens over the years which resulted in bent/deformed mounting rings. But I use pro level gear (heavy) and abuse it... I'm not very careful at all.

Not the answer you're looking for? Browse other questions tagged safety weight or ask your own question.

21
Where can I find the maximum lens weight for my camera?
16
What kind of dose can you expect from a radioactive lens?
3
What lightweight telephoto lens are available for Nikon bodies?
5
Is it safe to use a telephoto lens when the camera is on a tripod?
4
How much should Load Capacity influence my buying decision for Tripod Legs for a Large Telephoto Lens?
5
Where can I find the maximum camera weight for my lens?