How to get a clear image of a distant subject?

i have to shoot a subject which is 300 meters far and i need the image as clear as a portrait i took by a 18-55mm lense. Which lense i can use?

This was originally going to be a comment but ballooned.

There are so many variables to this question... but yes it's possible. In fact I've arguably tried something similar.

TL/DR. Yes you can. BUT it's probably not going to be great. Just move closer.

So let's take a look at these variables. 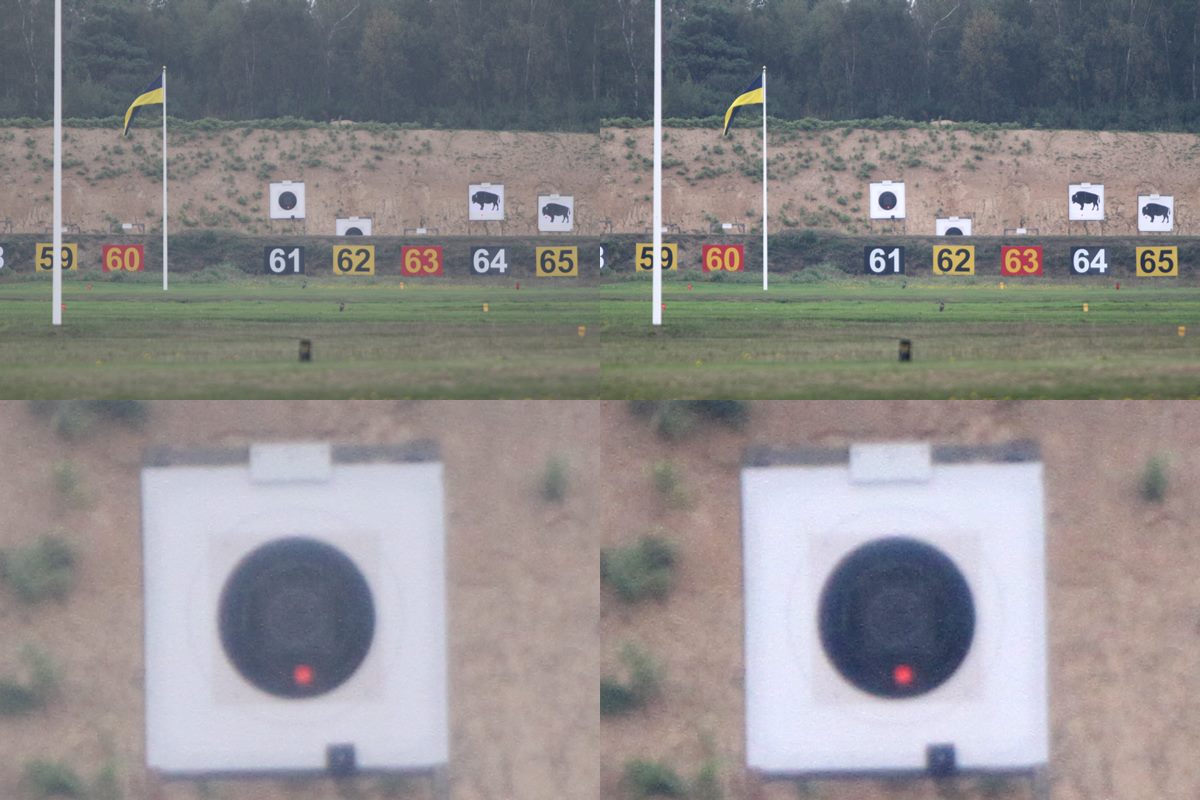 Thee above picture was taken YEARS ago on a military range at a distance of 600yds(548.64m). Those white target boards are ~1.2m across, with the orange squares on the target being max 10cm (again this image was years ago). The second row of markers on the ground (inbetween the two flags) are 400yards, (so 365m) away.

The top images are the uncropped images, whereas the bottom images are at 100% crop. the two on the left are unedited and the two on the right are edited. I shot this on a Canon 7D, Canon 70-200 f/2.8 USM with a Canon 2x Telextender III at ISO 1250. (I don't have the original image anymore, I stole it off a facebook post, luckily i mentioned the ISO).

So now we have some context. They're not great, are they. BUT. Take a look at the buffalo. You can see it's a buffalo. You can also make out the rings on the target, and this is further then you want it.

Apart from the colour, there isn't much separation between foreground (the target) and it's background (the sand bank). You're not going to get any depth of field separation unless you can get the subject quite a long way from the background.

The gear was less than optimal. Both my 7D and the extender are a tad soft. But. Having a decent quality sharp lens such as a 600 or 800mm prime AND a good body shooting at ISO100, would make that considerably sharper. As touched upon in the other answer you're going to need to shoot a fast shutter speed to reduce camera shake, so a tripod too. The less ISO and the faster shutter speed the better, and you're widest aperture is not going to be great. Also the better the body the better your image. You will probably need to crop, so better/bigger sensor will help.

Now. The gigantic curve ball. I can guess this is probably going to be outside. At that distance you will probably get atmospheric haze, and maybe even heat haze. You're going to want a nice clear day, not too hot (to reduce the haze). Bright (to allow you to shoot a lower ISO, and as fast a shutter speed as possible).

You can do it. But do you know what. Just get closer to the subject. If you can't. Try a remote camera.

I have a Nikon P900 point and shoot, which zooms out to 2000mm effective focal length. The below shots of an osprey were taken from about 300m away. These were handheld and autofocused. An osprey is rather smaller than a person and these represent about a sixth of the frame in each direction. You need a long lens. 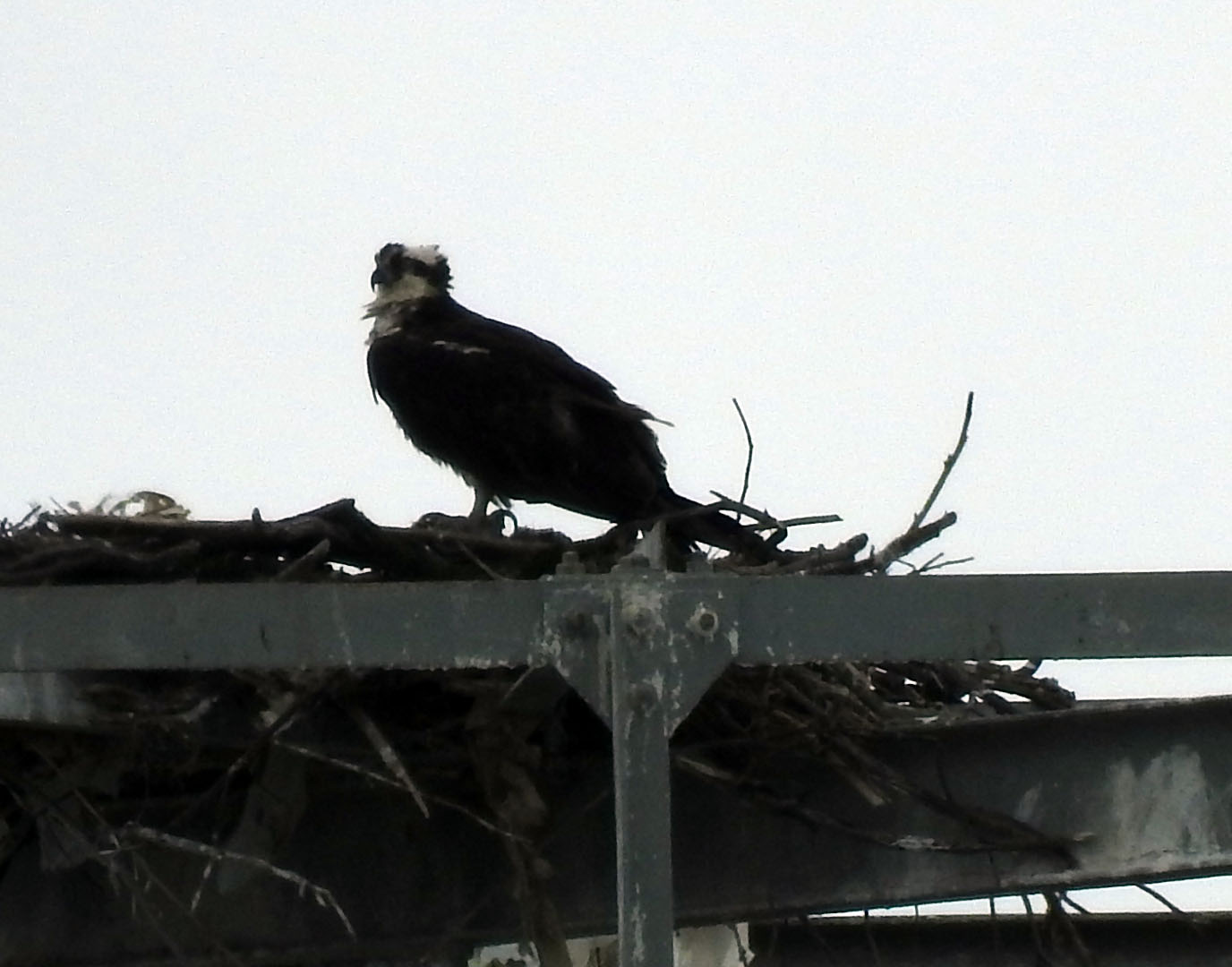 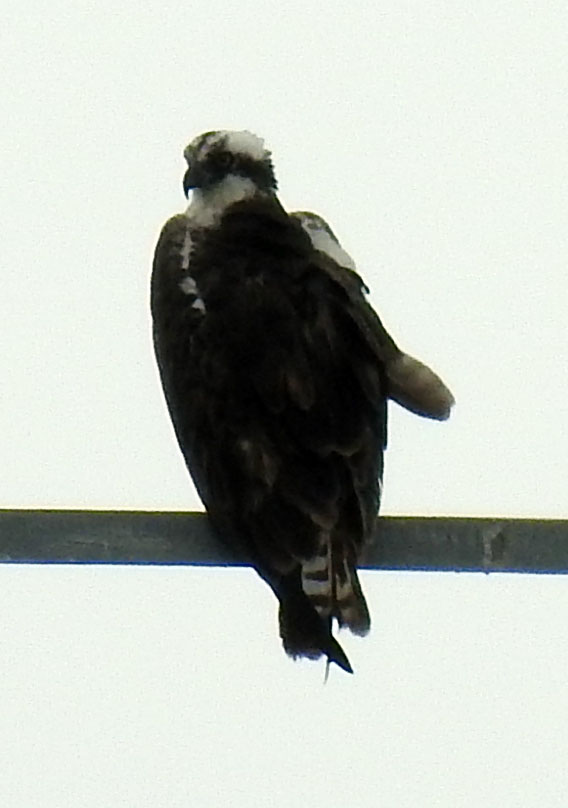 The short answer is that you can't - take pictures of a tree against distant hills and the tree will always look clearer than the hills irrespective of how much you spend on camera and lenses (I'm assuming at least two shots, one focussing on the tree, another on the hills). The intervening air will affect clarity even on a "clear" day.

I think the problem you're running into is the resolution of the camera - you won't be able to enlarge a shot and expect the same clarity. In that case, a longer focal length will make subjects appear closer and will cover more of the film/sensor with the subject. You'll be able to pick up something capable of 300mm focal length fairly cheaply, but you're likely to run into chromatic aberration at that price range.

With a long telephoto (300-500mm) the subject will appear a lot closer and will use more of the film/sensor giving better resolution of the subject, but in anything but bright lighting you're likely to lose clarity through camera movement. Above that focal length the subject will seem closer still, but you're unlikely to be able to use the camera hand held and will want a monopod/tripod or alternative mounting.

A clear picture of something the size of a person 300m away is going to be a challenge regardless of camera resolution or focal length. A nice trick might be to accept the subject will appear smaller, and use the loss of clarity with distance as a feature of the shot.

I used the calculator on this page to do the maths and the result is that to take a shot of a 2m tall standing person who fills the vertical frame on your APS-C DSLR from a distance of 300m you would need a focal length of about 3600mm (which is not remotely practical on a DSLR).

These numbers scale in proportion to the size of the object that fills the frame.

So if you want a 4m tall object to fill the vertical frame, you need an 1800mm lens. If you only half fill the frame with the 2m tall person then you only need 1800mm.

As an example, suppose you compose an object that is 2 meters distant and obtain a satisfactory image size with a 50mm lens mounted. If the object distance changes to 500 meters, we divide to find the variance. Thus 500 ÷ 2 = 250. Using this value as a “factor”, we multiply the former focal length by this factor to attain the needed focal length. Thus, 50mm X 250 = 12,500. In other words, a satisfactory image size, obtained with a 50mm, distance 2 meters, is replicated should you mount a 12,500mm focal length lens for the same subject, now 500 meters distant.

As you know, imaging far distant subjects is daunting. Not to mention finding and mounting such a super long lens. Most super long lenses are expensive, heavy, and thus challenging to use. Long lenses especially suffer degradation from chromatic aberration. One solution is a mirror lens system. The mirror lens telephoto solves the color error problem. Chromatic aberration is a function of the imaging light rays traversing a transparent lens array. A mirror system features an objective lens that has the silvering on the surface of the lens. The idea is, incoming rays are reflected by the first surface reflector coat; thus they never transverse the objective lens. In other words, a mirror lens is essentially free of chromatic aberrations. A mirror lens system is your best bet if you are to continue this quest.

i have to shoot a subject which is 300 meters far and i need the image as clear as a portrait i took by a 18-55mm lense.

Each one lets you select the sensor size of the camera you expect to use. Make sure that you set that appropriately, because the physical size of the sensor affects magnification.

Not the answer you're looking for? Browse other questions tagged focal-length or ask your own question.

1
How powerful of a telephoto lens do I need to take a picture of a swan from 300-500 meters away?

1
How far away can I be and still get a sharp subject with a 100mm lens?
3
How much versatility does a 85 mm lens have?
2
Why image at 400mm is LARGER THAN DOUBLE of image at 200mm? (according to lens formula)
0
Calculation for getting dimension of object in image not working
1
DOF change when keeping subject size same in the frame
3
Why would I need a portrait lens if I have a telephoto zoom lens covering the same focal length?