Why do photo cameras lose focus when you zoom, when movie or TV cameras keep it?

In photo cameras, i.e. (D)SLRs, digital cameras, etc., when you focus on an object and then you zoom (in or out), the object gets out of focus. On the other hand, in movie or TV cameras, the focus is kept across the whole zoom range. It is even the best practice to focus while zoomed in the most so that the focus is the best possible, and then zoom out as needed.

What is the difference in construction of the lenses for photo cameras compared to the movie/TV cameras? Or is this effect achieved in some other way than lens construction?

The effect's name is parfocality, we are speaking of parfocal lenses. Lenses that change their focus when zooming are called varifocal lenses.

True parfocality (i.e. absolutely no change in focus) cannot be achieved (or only with extreme effort) - it's all about perceived parfocality, as in "it seemingly does not change the focus, therefore it's parfocal".

Here's a diagram I stole from PetaPixel's article on this subject which is a screenshot from Vistek's YouTube-video on the subject: 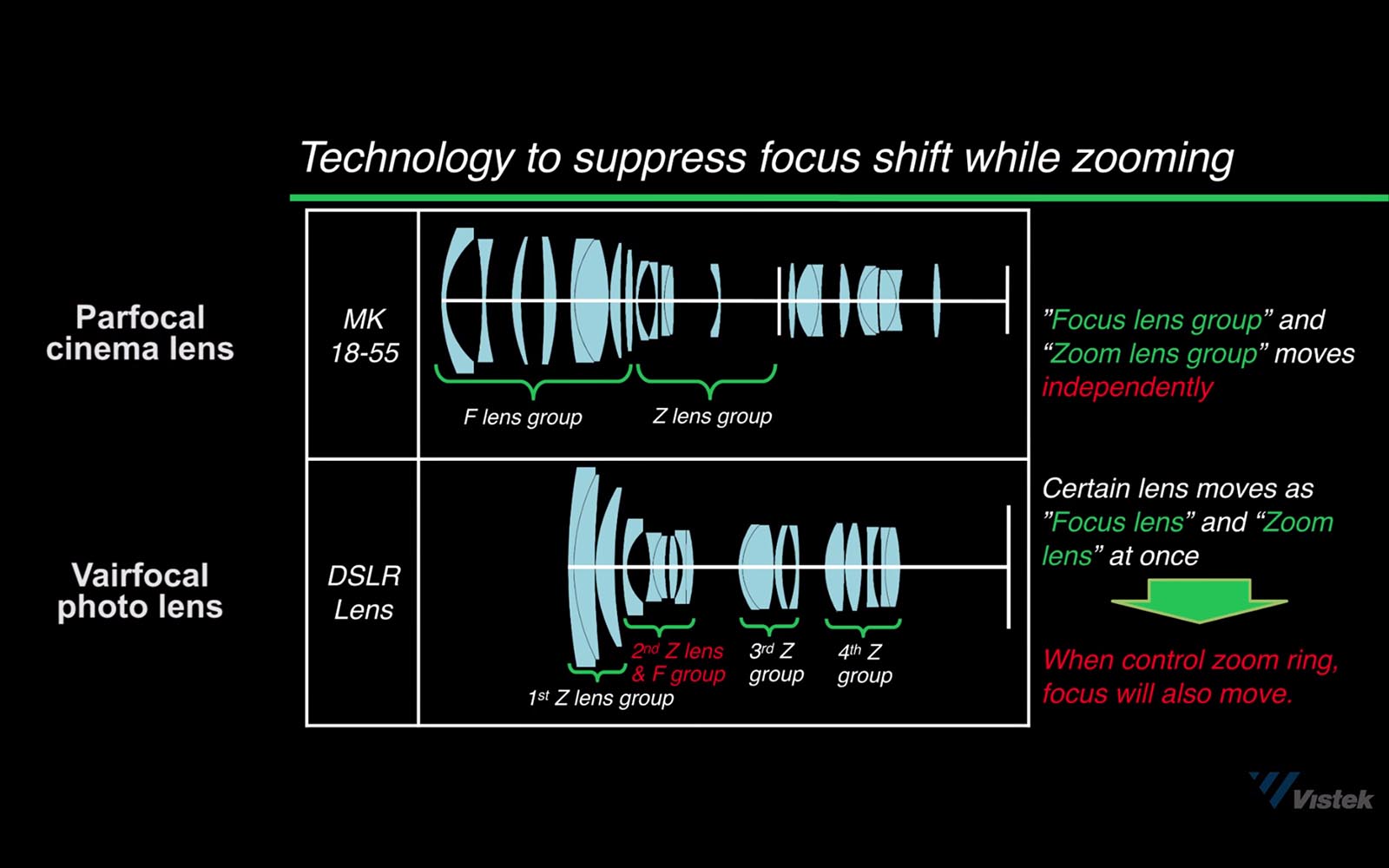 Note that this diagram is only exemplary - not all lenses are built in the same way. Anyhow, as it explains, parfocal lenses usually have an independetly moving focus lens group that varifocal lenses lack - usually to keep costs, weight, and/or lens dimensions (as in length*diameter) low.

Some relatively cheap lenses (at least compared to the ones from Angénieux) achieve a similar effect with tricks, like the Canon 24-105 f/4L IS USM (I):

"There's a cam inside [...] that is designed to maintain an accurate focus when the lens is zoomed from tele towards wide." (Chuck Westfall, Canon USA)

Also, some lenses with focus-by-wire (like Canon's STM-lenses) might try to hold the focus automatically. For example, when I filmed with a loaned Sony FS700 and its kit-lens (18-200mm f/3.5-6.3), I noticed that when I zoomed in/out slowly, I could see the focus motor working to keep the focus point where it was. However, when zooming in/out more vigorously, the focus point "broke loose" because the motor could not keep up with the rate at which the focus point changed.

From the my example with the FS700 above, we can also see that not even all lenses that are marketed as TV- and cinema-lenses are parfocal. So if you buy a very cheap zoom-lens that is marketed as "video", it is very unlikely to be a parfocal one (unless it says so).

From my limited experience, a good rule of thumb to determine if a lens is parfocal or not seems to be the existence of an adjustable backfocus - Note that backfocus, in video-terms, does not mean the same as in photography: it refers to the Flange focal distance.

Website XY says that my lens is parfocal, but I find that it is not. Is my lens defective?

Your lens probably is not broken. Absolute parfocality cannot be achieved, but rather, it's all about perceived parfocality.

The same happens with parfocality: If the image is so small that I can't distinguish between 5cm in front (or in the back) of the focal plane and the plane itself, the photo seemingly is "in focus" between ± 5cm of the focal plane. Therefore, if the focus changes just as much as the visual tolerance allows, one can say that the lens is parfocal.

With thanks to Jannik Pitt and Michael Clark.

I bought lens XY and it seemingly is parfocal, although everybody seems to disagree. Who is correct?

It's the same as the chapter above: You perceive your lens as parfocal, only now, it is because of depth of field (DOF).

You probably used a very small aperture / a very large aperture number (e.g. f/16) and/or some (ultra-)wide-angle lens (f/16 will not be sufficient for 400mm, for example) and/or you are focussing on something very distant.

If the lens changes its focus at a small enough rate, you cannot perceive that - this is especially true when zooming out, as this will increase the DOF. Technically, it's not parfocal - but you will perceive it as parfocal, which, as I keep writing here, is all that matters.

With thanks to Michael Clark.

A lens that maintains the same distance of focus as it is zoomed is said to be parfocal. This is a highly desirable quality in a lens if one is shooting film or video and wishes to maintain focus while zooming in or out during a continuous shot.

Some zoom lenses that are not really parfocal, particularly those with smaller maximum apertures, can appear to act like they are parfocal if the focusing error introduced by zooming is less than the depth of field at the lens' widest aperture.

About twice a week I get a call from a photo-videographer wanting to know which photo zoom lenses in a certain focal length are parfocal (stays in focus while changing focal lengths). It’s understandable why they would ask; a superb photo zoom is 1/10th the cost of a good video zoom.

They get pretty mad when I tell them that none of them are. Often, they’ll tell me they know this lens is or that one is, because LensGuruGod1232 on their favorite forum shoots with this lens and says it is. They may even – if they’ve done some research – pull up an old article I wrote years ago listing some photo lenses that were parfocal and add that to the argument.

I have to tell them that article doesn’t count anymore. For one thing, parfocal is not an absolute definition. What is acceptable as parfocal to one person in one situation is unacceptable in another. Also, equipment has changed. A lens that might have appeared parfocal on a small sensor shooting standard definition video may be obviously not parfocal on a large modern sensor shooting 4k video. Finally, I’ve gotten older and wiser. Some things I wrote about years ago, I now realize are, um, well, less correct than I would have liked.

He goes on to point out that one copy of a specific lens model can demonstrate more or less parfocality than another copy of the same lens model.

The emphasis on still lenses is absolute optical image quality. The emphasis on non-Cinema quality video lenses, particularly those in the same price ranges as lenses primarily intended for still photography, is being 'close enough' to parfocal and not demonstrating focus breathing while being 'good enough' optically for HD or 4K video.

Lenses have to be specially designed in order to keep the same focus point when zooming. Making lenses this way is more complex and costs more, so such lenses are more expensive.

This feature is usually not important to photographers, so lenses intended for photographic use typically don't do this. But video lenses typically do have this feature as it allows for zooming while recording without the picture going out of focus, giving the videographer a wider range of creative effects that they can use.

There are, however, some photography lenses that do have this feature, although they are more expensive and usually aimed at a specific market that needs them. It's not uncommon to see telephotos with this feature, as it is very useful when shooting sporting events with a telephoto lens to not need to refocus all the time, and the shorter depth of field with a telephoto lens makes refocusing even more important.

Another feature that you'll see on video lenses is the ability for the lens to be focused without changing the focal length. This effect is less noticeable and has little impact on the photographer, but is again very useful for video as it allows changing the point of focus while recording and it's pretty common to see this effect used in video.

TL;DR Making lenses that can zoom without losing focus is more expensive. It's usually unnecessary for photography lenses to have this feature but it's very useful for video lenses.

Not the answer you're looking for? Browse other questions tagged focus zoom lens-construction or ask your own question.

49
What does STM mean on a Canon lens?
1
Why does this lens lose focus when you zoom in but not when you zoom out?
8
Why are so many kit-lenses parfocal if it's an expensive feature?
4
How is focus-breathing controlled in lens design?
2
Supermoon: In focus and Out of focus
5
Sony A7iii how to permanently display focus distance in MF mode
2
autofocus shown in viewfinder and captured on actual pic is different
1
Focusing issue with kit lens
-2
Universal solution for wide focus length DSLR camera in 2017
0
Is the Canon EF 24-105mm f/4L IS USM lens parfocal or not?
See more linked questions

1
Why does this lens lose focus when you zoom in but not when you zoom out?
5
Background warping through foreground defocus
1
Focusing issue with kit lens
3
Why can't my compact digital camera focus when applying 8x zoom?
1
Is minimum focus distance (MFD) really minimum?
1
Focal length, zoom-x, magnification, and their relationship to image size projected on sensor