Possible cause of light leak in film SLR

I'm trying to identify a likely cause of a strange line which seems to crop up occasionally in some of my shots.

From my limited experience, it looks like a light leak, however it doesn't seem to be a permanent one as not all shots are affected.

When it does come up, it's usually in the same spot, and often only on longer exposures.

My best theory is that the shutter is sticking slightly, but as I've not been doing this for very long, I would be grateful for any advice or insight.

To add a little more detail, this was taken on a Fujica ST705 which has a cloth focal plane shutter. I've investigated the body for light leaks, and cannot find any obvious ones.

When I store the camera while not in use, it lives in my camera bag which is very dark and made of thick canvas so quite good for light insulation.

As I was asked in one of the comments, my practice when using the camera is normally to wind the film on after taking a shot, and if the camera won't be used for a while, I lock the shutter release.

I can't remember exactly which sep-sure settings I used on the two shots, but for the first, I would guess that I set to f11 (North Wales on a slightly dull day), and shot at 1/60, and the second was likely f4 at 1/30, but that is a guess based on how I would approach the same situation now. Considering that both shots are underexposed though, it's entirely possible that my exposure time was shorter - I've not been doing this for very long, and I'm certainly not discounting the possibility that this issue is down to my own mistake. 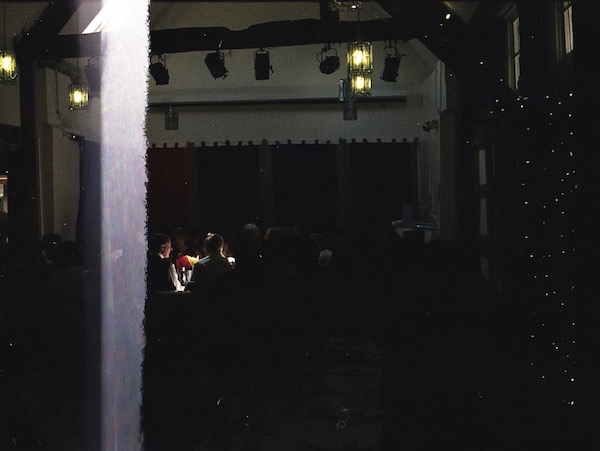 I like Alan's idea of putting a small light inside the camera.

My guess is that you've got a problem with the light seal on the vertical edge of the camera back on the takeup spool side.

Reasons to suggest a takeup side leak:

-On the other hand, at the takeup side, you're wrapping the film around the takeup spool. As you take more shots, the radius of the film wrapped around the spool increases, so where a light leak hits the film can change relative to the frame boundaries.

-The rough and not straight right hand edge of the overexposed bit suggests a light leak, rather than a shutter problem, to me.

Procure a tiny key chain flashlight. It must be tiny and it must remain on after being switched on. Place the flashlight inside the camera. Now go to a room or closet you can make dark. Stay in the dark examining the camera from all angles. The theory is, a breach that allows light to leak in will also leak out. If the breach is tiny and the light leaking out is feeble, you will need about 15 minutes to dark adapt.

This method works - best of luck!

Had similar concern about leak for an old Nikon FE. Tried out Alan's idea (with some modif), not sure if it gets the correct result. I didn't have a small tiny keychain light, only had a small regular torch. I took out the lens, switched camera to bulb mode, and shone a torch through the front opening with the shutter up (button pressed) and film back closed. Then i examined if there was any leak. To test leak from shutter, i opened the film back and left the shutter closed to see if shutter leaks light.

You cannot check for light leaks, when you shine light from the front, with bulb mode. The back of the camera has a pressure plate that holds the film flat, so even without film it is firmly pressed to film's position, so no light goes further. We have to put the light source inside from the back of camera only. Therefore, tiny keychain light remains the only solution but i did not try it to check if it works.

7
These SLR developed photos are bad. Is it mine or the photolab's fault?

3
Is this streak across multiple photos from a (35mm) Zenit 12SD caused by a light leak?
8
What's the cause of this Leica M6 light leak?
6
(film) What can cause blue vignetting on sub-exposed or dark shots?
17
What colour scheme for model aircraft should I use to give a realistic black and white film photo?
4
Orange and other artifacts in photos from film camera
26
Is this light stripe at the top of images from my DSLR a light leak?
3
Light leaks in RB67 film handling?
3
What are these curved, dark bands at the top of my photo?
1
What causes these light leaks on bulk loaded film
0
Camera light leak or processing issue?