How would apodization impact landscape photography?

I haven't been able to find any reviews, articles, or conversations though discussing the impact of the apodization on shots that are intended to have even exposure and clarity such as landscape.

The Smooth Trans Focus (STF) technology in photographic lenses uses an apodization filter to realize notably smooth bokeh with rounded out-of-focus highlights in both the foreground and background. This is accomplished by utilizing a concave neutral-gray tinted lens element next to the aperture blades as apodization filter, a technology originally invented (and patented) by Minolta in the 1980s, and first implemented in a commercially available lens in 1999. In contrast to soft-focus lenses, STF lenses render a perfectly sharp image in the focus plane.

Will the apodization glass result in uneven lighting? Is this true whether shooting wide-open and stopped down?

First, consider what apodization is. It is the intentional gradual vignetting of a lens, with the intention, typically, of producing better bokeh.

Think of it like a radial graduated ND filter being put in the aperture stop. The edge of the aperture might be almost black (non-transmissive) while the center is completely clear.

Because it's the aperture stop, everywhere in the field of view interacts equally with this effect.

As you close the aperture, the most truncated part is removed; in the limit of completely closed (say, f/22), the lens will be just like a regular camera lens.

What happens in between, at say f/8?

Well, you get something partway between a fully apodized and an unapodized lens.

How does this impact the landscape performance of the lens?

Well, in the diffraction limited case, an apodized lens has more contrast than an unapodized one, in exchange for reduced resolution. Depending what the f/# is, the level of detail that is lost may fall outside the capture range of your camera.

We can also assume that most lenses of high quality are in a diffraction limited regime at f/8 and smaller.

At these apertures, you get the "partially apodized" effect, and you will get a small increase in contrast in exchange for a small loss of resolution. The loss of resolution, again, may be at higher frequencies than your sensor can capture.

I can show you a simulation if you want.

If you want to see the effect of an apodization filter, shoot with a similar (non-apodization filter equipped) lens and do 'depth-of-field' stacking. Take multiple exposures at various apertures (compensating with a corresponding shutter time to keep exposure constant) and then combine the images.

Whether a specific lens with an apodization filter has very much light falloff in the corners and at the edges is pretty much the same as it is for any other lens - it all depends on the design of the lens. The apodizing filter will add some vignetting (compared to another otherwise similar lens of the same focal length using an f-number that is equal to the apodizing lens' T-stop number - because some of the light outside of, say, the diameter of an f/5.6 entrance pupil is being allowed through by a T5.6 setting on an apodizing lens), but 100mm lenses don't typically have much light falloff (compared to wide aperture wide angle lenses) to begin with.

What will change is that the total light transmission of the lens will be less. Even though the (partially blocked) entrance pupil size wide open is f/2.8, the neutral density of the apodization filter gives it a transmission of only T5.6. The aperture settings on the lens are marked in T-stops, rather than f-stops.

In the case of the FE 100mm F2.8 STF GM OSS, the lens shows less than two-thirds stop vignetting wide open at T5.6, and that stays fairly constant all of the way to T22. It's probably not enough for you to notice, but in certain situations (e.g. clear blue sky) it might be.

At T5.6 the Sony lens has roughly half the light falloff demonstrated by the (long discontinued) Canon EF 135mm f/2.8 Soft Focus lens set at f/2.8. The Sony lens also does not experience a reduction in sharpness at the center or edges like most older soft focus designs. 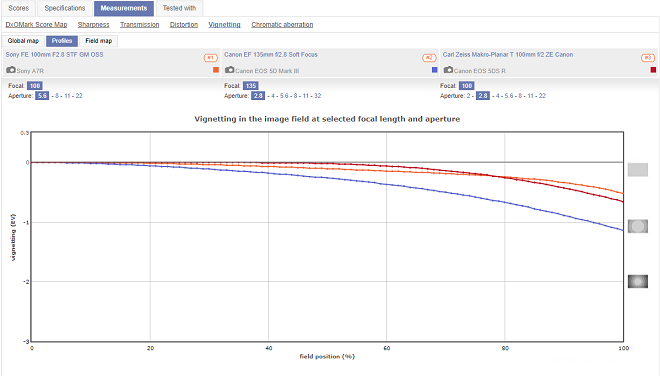 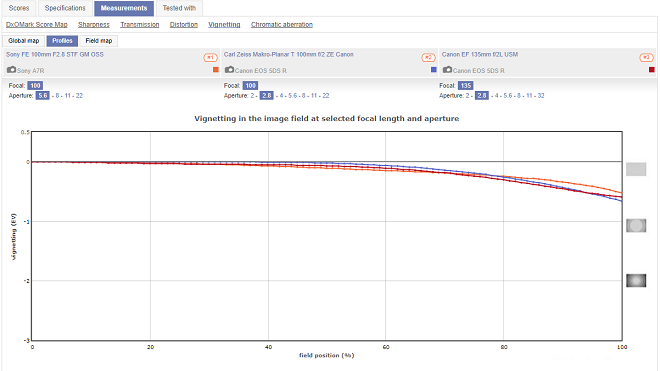 If you base it on light transmission, though, the more traditional lenses demonstrate much less vignetting at f/5.6 than the Sony lens does at T5.6. 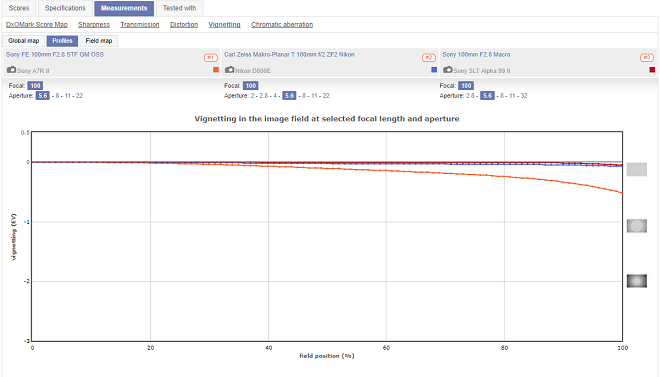 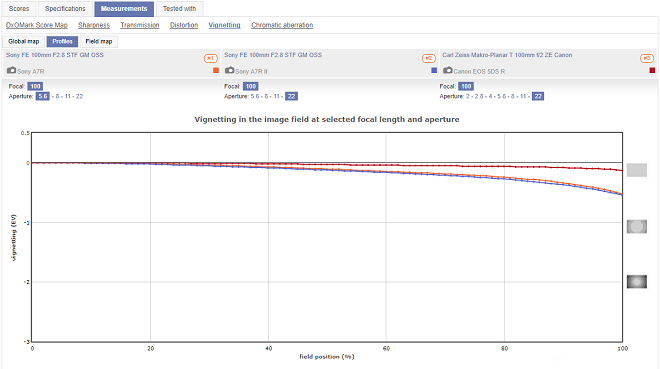 So a very real question could be more along the lines of why would one consider such a lens for landscape work where greater depth of field is usually desired, bright edges of out of focus highlights are not usually a concern, and image stabilization is irrelevant when shooting from a tripod?

At T5.6 the Sony FE 100mm F2.8 STF GM OSS will provide the blurry out-of-focus areas of a more traditional lens set at f/2.8 while only giving the light transmission of a traditional lens set at f/5-5.6. The whole point of the apodization filter is to eliminate bright edges and irregular shapes in the bokeh of out of focus highlights. But in landscape photography the goal is typically to not have anything out of focus to begin with.

This lens is designed for shooting portraits handheld at relatively close distances (compared to shooting landscapes with a 100mm lens) and being able to get slightly more depth of field in focus while still rendering very soft and smooth bokeh in out of focus areas. The apodization filter and the IS add to the cost of the lens in order to provide those characteristics desired in such a portrait lens. Neither really adds much of anything to a lens used for landscape photos.

The acutance of the Sony FE 100mm F2.8 STF GM OSS is impressive, even when compared against a lens such as the Carl Zeiss Makro-Planar T 100mm f/2 ZE. 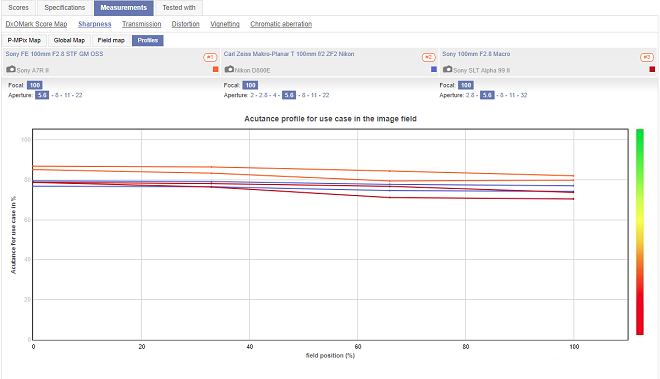 On the other side of the equation:

From comments by the OP:

Let's say I shoot a landscape with this and the exact same landscape with the 70-200 f4 (comparable price) at 100mm. What would the difference there be? If there's no major difference then for me I'd prefer to have this one for its other functions. Where you say "Why would you consider it?" I think "Is there a reason not to use it in X situation?"

Your initial post does not really mention any other uses other than for landscape photography.

The biggest difference is that the lens in question effectively has a 2 stop ND filter built in. You'll get most of the out-of-focus blur of f/2.8 while only getting the exposure of f/5.6.

With a more typical 100mm lens you will see virtually no vignetting at f/5.6 or narrower. Even at T22 (more or less equivalent to f/11 with a conventional design) the Sony FE 100mm F2.8 STF GM OSS still demonstrates the same vignetting it does wide open at T5.6.

Again, you'll get more vignetting at apertures of f/5.6 and narrower than with a typical 100mm f/2.8 lens without the apodization filter.

The Sony FE 100mm F2.8 STF GM OSS does show a bit of pincushion distortion that is absent from the Sony 100mm f/2.8 Macro and other more typical 100mm prime lenses.

It also shows more chromatic aberration in the midframe areas: 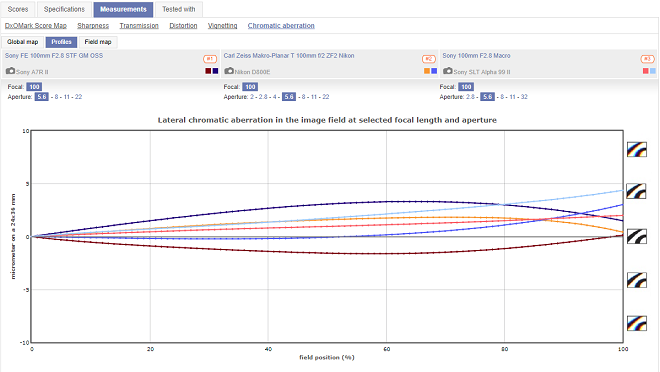 Of course a 70-200mm f/4 zoom will typically cost more than a 100mm f/2.8 with similar optical quality. There are plenty of 90-100mm f/2.8 macro lenses with similar optical image quality that don't cost as much as the Sony FE 100mm F2.8 STF GM OSS. You're either paying extra for features you may or may not want, or you're paying extra for zoom you may or may not find more useful, when either are compared to a more conventional 100mm f/2.8. You did not indicate you were interested in those features in the question, but if you are then all of that must be weighed.

Again, it depends on whether or not you consider the following to be hindrances:

Not the answer you're looking for? Browse other questions tagged optics sony lens-design or ask your own question.

16
How does a spherical lens differ from an aspherical lens?
10
How do I design a conceptual lens schematic?
5
How does the Sony 135 F2.8 [T4.5] STF twin aperture lens design work?
14
How does an apodization filter improve bokeh?
7
Does sensor size impact the diffraction limit of a lens?
5
Why would lens be much longer than its focal length?
12
How do manufacturers get to high (83x) zoom levels on hybrid cameras?
5
What kind of lenses with a “slightly different diffraction behaviour” were used in “large format photography in the 1980s”?