Is there an equivalent to Adobe's "Vibrance" in Gimp?

See: What's the difference between saturation and vibrance in Lightroom?

In a nutshell, Adobe's Vibrance is a "smart" color adjustment that increases saturation selectively, leaving skin tones and other saturated colors alone.

I'm curious if there's any equivalent in Gimp.

I've found a couple of plugins and scripts that use the same word "vibrance", but in everything I see, they don't mean the same thing. Usually, it's "super-saturation", as in this script, which claims it's an "implementation of a 'digital velvia'. I'm not looking for that. The Adobe feature seems to be a more subtle (and therefore more useful) tool for photo editing.

If nothing exists, is there a convenient (or even less-convenient) way to emulate it?

If Matt's answer about the nature of vibrance is correct (and the Adobe documentation agrees), you may be able to obtain a similar effect in GIMP. However, I don't have any Adobe software, so I can't judge how closely this actually matches Adobe's effect.

That's pretty clumsy compared to using a slider, and it doesn't offer any smarts about skin tones, either. It may be possible for someone familiar with writing GIMP scripts (i.e., not me) to streamline and improve it, though.

Here's a photo I tried this method with. I tried to get about the same increase in saturation in the grass with both the ordinary saturation control and by using curves on a decomposed saturation layer. You can see that in both adjusted pictures, the grass is much more saturated, but that the simple saturation control also puts the reds in the fence and in the dogs' fur way over the top, where the curves method didn't. 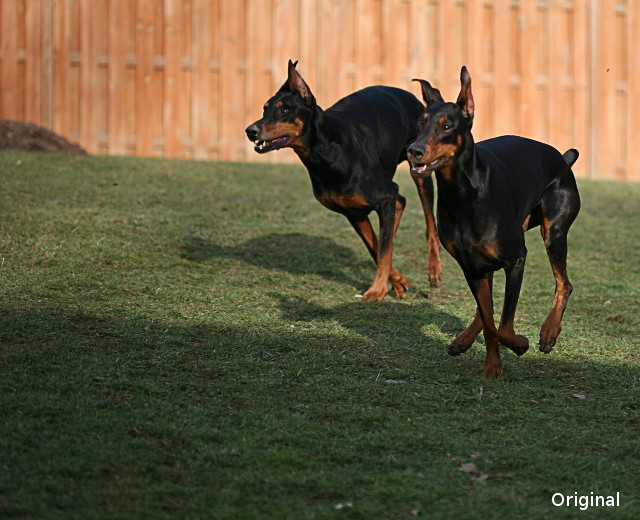 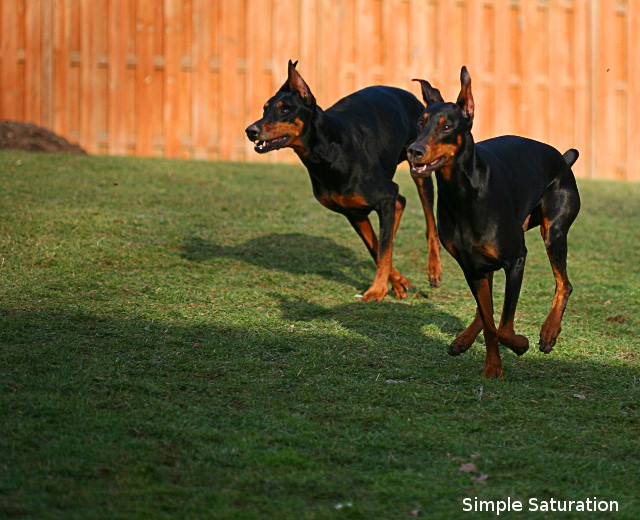 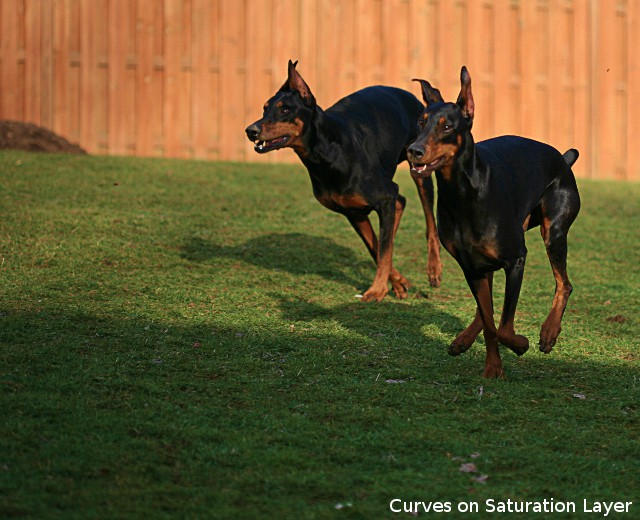 whether the Adobe feature does anything special with skin tones

I've always thought it did, and Adobe come right out and say it does. But I wanted to test it before saying so. Here's the test I did: I took our standard calibration print, which was specifically built to cover a wide range of skin tones:

Then I undid that and gave it a +100 vibrance boost instead:

Based on that experiment, I do think vibrance gives skin tones a little bit of special dispensation. Now, Matt then followed up with:

and how to recreate that generically.

I gotta tell ya, I'm an software engineer, and was a hard core Gimp user for a very very long time... and this had me stumped for hours. But here's a best guess at how you could accomplish it:

That will give you the basic setup, once you have this working, the opacity slider on that layer is your "vibrance" control. To demonstrate what you'll end up with, here's a short screencast I made playing with the faux vibrance layer with an image of my son.

If you are comfortable with writing GIMP scripts, you can modify the script provided in your link, to do the following operations:

Based on the your brief description of what Vibrance does, I'd approach this in one of two ways in GIMP.

You can also do color/saturation adjustment in a non-destructive way by creating a new empty layer set to "Color" overlay mode and a lowish opacity, then using the airbrush tool with a large soft brush gently to just paint in some colour. Or to do it more indiscriminately to all colours try the "Saturation" overlay mode and just painting in pure red (or green or blue, makes no difference as long as it's saturated). You can use the eraser tool to gently reduce the effect in certain areas.

Not the answer you're looking for? Browse other questions tagged photoshop open-source gimp color vibrance or ask your own question.

66
What are the key photography-related features from Photoshop that are missing in GIMP?
60
What's the difference between saturation and vibrance in Lightroom?
1
How does Saturation in Lightroom work?

66
What are the key photography-related features from Photoshop that are missing in GIMP?
46
Does Photoshop have an equivalent to Gimp's "Color to Alpha"?
13
How does the Curves tool work in GIMP?
2
Anyone know of a PS filter that's equivalent to the Retinex filter for GIMP?
60
What's the difference between saturation and vibrance in Lightroom?
14
How to best filter away high ISO noise in Gimp?
6
How to achieve Japanese-painting like effect with Gimp?
5
How to calculate mean/average photo color in GIMP?
6
When should I use saturation over vibrance?
1
Can you match color levels of semi-overlapping layers in GIMP using a single pixel color?