Why there aren't polarizer filter for instant camera?

I own a Polaroid 600 and I couldn't be able to find it. So I thought there may be a process that doesn't let it use it.

There's nothing physically that prevents creating and using a polarizer filter with an instant camera. It's more a question of practicality vs. cost and the market demand for such an option. There once (40-50 years ago) were some "interesting" gizmos available to enable using filters on some specific instant camera models. This one is a color filter, but I seem to remember similar polarizers with interconnected rotating mechanisms were also available. The smaller lens is for the viewfinder which uses an independent optical path from the main lens. 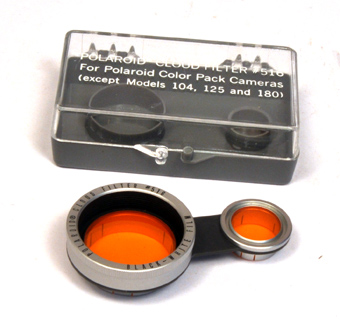 The most obvious thing would be that the instant camera would need some way of attaching the filter to the front of the lens. This would require a camera design that costs incrementally more to make, thus cutting the profit margin for manufacturers.

Since most (all?) instant cameras do not have a through the lens viewfinder, you won't be able to place the filter directly in front of the lens and rotate it to preview the different effect at various angles of the polarizer. You'd have to first place it in front of the viewfinder. Due to the way polarizers work, you'd need to point the camera in the same direction when previewing as when you take the shot. This makes using a polarizer with an instant camera totally impractical for the vast majority of users who might even be interested.

Another consideration would be that as optics become smaller (such as is the case with most instant cameras) any manufacturing defects in anything in the optical path become more significant. High quality flat filters require higher manufacturing tolerances than lower quality filters do. Making things to tighter tolerances can increase the manufacturing cost in an exponential, rather than linear, way. A typical high quality polarizing filter for an even moderately large lens, say with a 52mm thread, costs much more than many instant cameras do! Even though a smaller filter would use significantly less materials, to get the same photographic quality through such a smaller filter would require much higher manufacturing tolerances.

Then there is the question of light transmission. Most instant cameras already have fairly 'slow' apertures. They often only have rudimentary exposure controls if the exposure can be altered at all. Adding a filter that reduces light transmission by anywhere from 2/3 to 2 full stops complicates getting proper exposure.

If you really want to experiment with your Polaroid 600, you can take a lens from a pair of polarized sunglasses and use it in front of the lens. You'll have to rotate it in front of the viewfinder first, while the camera is pointed in the exact same direction as when you take the photo, in order to see how much the polarizing effect will be at different positions of the filter.

I suppose people never used instant cameras professionally, so no one really cared? It was always marketed as "a consumer friendly camera", so you can get the results quickly.. I don't think it was ever about quality or even extensibility. Even high-end instant cameras were used just for previewing the scene, so the professional could then use proper more expensive equipment.

Nowadays no one cares either, because the mainstream market was basically killed by digital era and all that remains is a very small niche market.

In the heyday of instant camera, you could buy polarizing filters that clamped over the lens. Today you can experiment holding polarizing sunglasses over the lens or polarizing glasses you took away from a 3D movie. You can buy a polarizing filter and mount it over your camera’s lens with duct tape. In other words, if you use your noodle you can mount one.

Mounting is not the only problem. To achieve a good outcome, after mounting a polarizing filter, it must be rotated for best effect. The angle of rotation will likely be different for different subjects and conditions. The most common usage is to mount the polarizing filter on a camera that presents a viewfinder or view screen as seen by the camera lens. Using a polarizing filter on cameras that do not have this feature is challenging. A few such filters were made for this situation. They featured a filter that mounted to the camera and a second filter on a stick like a lollipop. The filter at the end of the lollipop was for viewing. This additional viewing filter helped the photographer rotate the actual taking filter, for best effect.

It’s ironic, Edwin Land, the founder of the Polaroid Corp. made his money making Polaroid sunglasses and filters. His method was to imbed tiny fragments of polarizing minerals in transparent plastic. He invented his instant camera and marketed it as the Polaroid. The camera did not utilize the phenomenon of polarization.

Not the answer you're looking for? Browse other questions tagged polarizer polaroid instant-camera or ask your own question.

2
What are the differences between current films available for the Polaroid SX-70 Land camera?
0
Is there any way to revive expired polaroid film?
2
What is the difference (apart from size) between i-Type, 600, SX-70 and Spectra Polaroid films?
3
Is there any distinct difference between using a 35mm camera versus a 35mm instant camera?
2
Instant film for a 4x5 large format camera?
0
Polaroid + with I-type film
4
Why orange color casting started to appear in my Polaroid B&W film several months after developing?
1
Polaroid Sun 660 problem