How can I avoid star trails? [duplicate]

When shooting deep sky objects such as Andromeda or the Orion nebula, I find that I'm between a rock and a hard place. I can get passable results by running 3600 ISO and four second exposure. Any longer exposures will show star trails that wont work in DeepSkyStacker. I'm pretty sure my focusing is as tight as can be. I'd like to get more detail and stars but without a motor drive for my equatorial mount, I'm not sure it's doable. Also I find that using a barlow lens really makes the star trails much more noticeable. With just telescope and no barlow the star trails are still there but less apparent.

Any ideas on how I can get nice crisp photos? Maybe many short exposures stacked will yield the same result? Even though the short exposures have much fewer stars and details, will they still work in DeepSkyStacker? Are there other editing programs that might work a bit better for me? 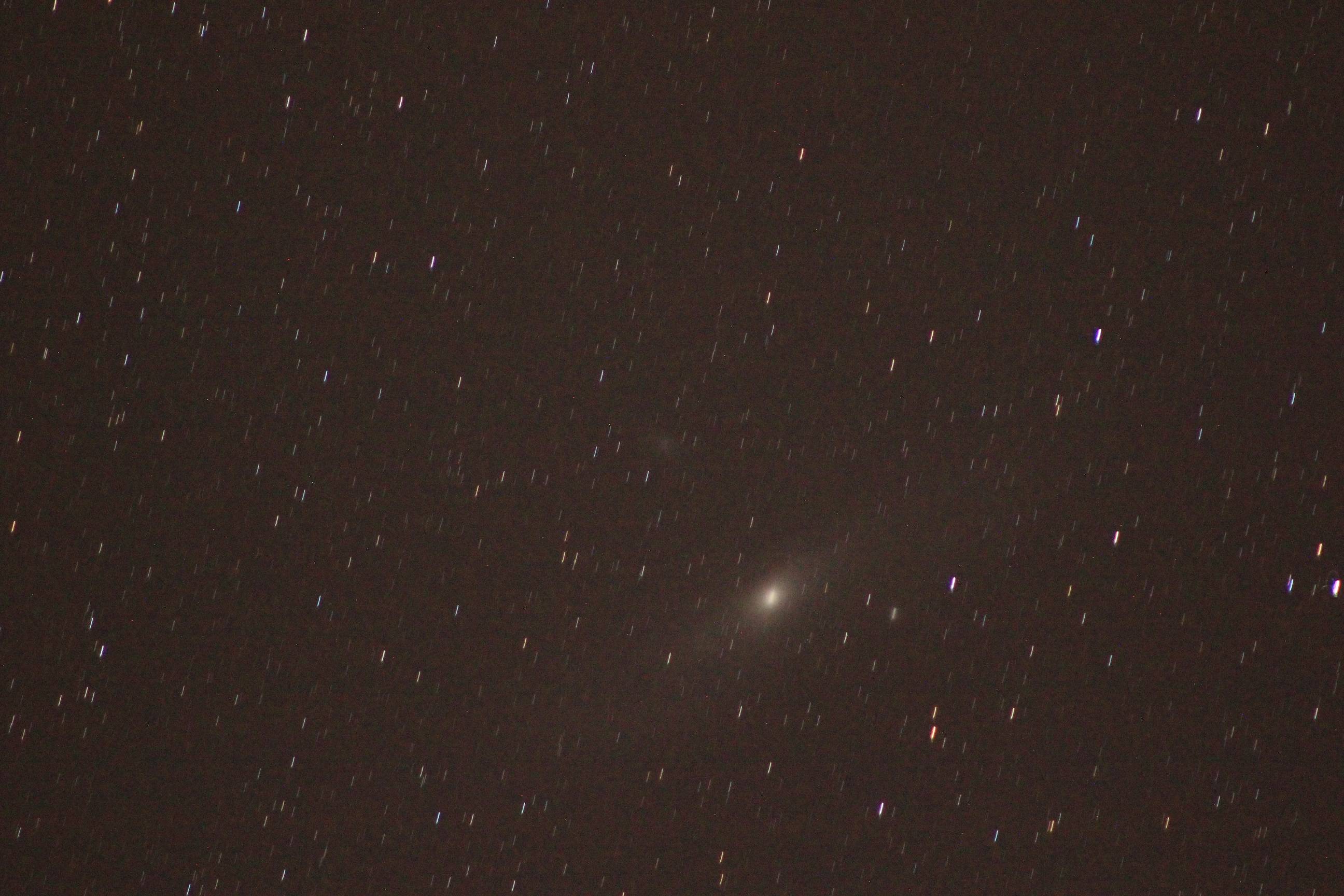 This isn't a direct answer to your question, but something that really needs to be pointed out about your example photograph.

The symptom you show in your example is NOT "star trails" in the usual sense, meaning they are caused by the earth's rotation during the exposure. Note that each star appears as two distinct points. This was caused by camera wobble, which is something you can fix.

In this example, the camera wobbled in such a way that with the earth's angular change superimposed, it first held fairly steady in one direction, then moved quickly, then held fairly steady again in another direction. The usual cause of such wobble is the motion from pressing the shutter button. A simple way to avoid that is to lock up the mirror, then use the self-timer to trigger the shutter. You only need a short self-timer delay, like 2 seconds. That gives the wobble from you touching the camera time to die down before the actual exposure.

Another thing to do is to hang a normal towel over the camera, of course being careful to not obstruct the light into the lens. The towel will dampen wobbles more quickly than they would on their own.

As a rough ballpark figure, you're likely to see trailing at around 400 / focal length seconds or longer. Adding a 2x barlow doubles the effective focal length, and thus halves your longest usable exposure (It also gives you 1/4 the photons/pixel for extended objects, so generally not a great idea for AP on a non tracking mount).

Yes, you can combine a lot more pictures - I've seen a nice photo of andromeda that someone took with a camera and 300mm lens on a normal tripod, by stacking hundreds of around 1 second exposures. But it's a LOT easier with a tracking mount. (For more details of the tripod only approach, see Forest Tanaka's video at https://www.youtube.com/watch?v=e0JSTF8SGi4).

You could see if there's an add on motor available for your equatorial mount - they're usually more for visual use, so may not be as accurate as a motorised mount designed for imaging, but should at least let you go to somewhat longer exposures.

If you want to get seriously into deep sky object imaging, you're going to need a decent motorised equatorial mount.

Alt-az goto mounts suffer from an effect called field rotation, where the field of view gradually rotates as the mount tracks an object. This limits you to around a 30 second max exposure before you get obvious trailing from the rotation (it varies with latitude and where you're pointing).

Equatorial mounts don't have that problem, but you'll still need a good quality one - for imaging, you want to keep the image in the same position to a pixel-perfect level. For visual use, you just need to keep the object somewhere in the field of view.

As a rule of thumb, if an equatorial mount doesn't have autoguider inputs, it's likely not going to be accurate enough for long exposure imaging. Also, try not to exceed around 50% of the mount's rated weight capacity when imaging - the capacities are usually quoted for visual use, which isn't as demanding.

Assuming you have a Pentax DSLR, it is possible using an Astrotracer unit.

This device has a built-in GPS and digital compass which is used to control the sensor to compensate for the rotation of the earth. The list of compatible camera is shown in the link above.

Otherwise, you could try short exposures and then pass them through align image stack, assuming you do not have any foreground elements. Not sure it will work but, since its free, its worth a shot.

...but without a motor drive for my equatorial mount, I'm not sure it's doable.

You've pretty much answered your own question.

The problem with very short exposure times and high ISO settings is that there's not enough actual signal above the noise floor for image stacking to do much good at showing very dim objects.

Not the answer you're looking for? Browse other questions tagged astrophotography image-stacking stars or ask your own question.

24
How can I avoid star trails without an expensive tracking mount?
2
How do I get the stars in focus with my astrophotography setup?