How can I trigger multiple cameras to fire simultaneously?

I have 10 Canon 5DmkII cameras which I want to fire simultaneously... How can I accomplish this task repeatedly and reliably?

NOTE: Although I mention 10 cameras, it will be a 'super bonus' if the solution is scalable to n cameras...

Pocket Wizards (as well as several other brands of remote triggers) can also be used to trigger remote cameras as well.

Are you renting all of this equipment?

There is an extremely easy to do this. Simply use an IR trigger with both cameras facing the same way.

I've used this to trigger two Pentax K-7 for 3D photography (and once a K-5 and K-7). The 5D Mark II seems to support an IR trigger as well.

EDIT: For some reason, I read you had 2 cameras or maybe I thought you just wrote in binary ;) but you can actually scale this by buying IR Repeaters to repeat the signal for your remote to multiple cameras. You'll need to do a lot of assembling, but I suppose you have to do that to point 10 5D Mark IIs in the right direction anyways.

I was in a friend's studio a few weeks back and he was firing a setup of 12 1Ds and 5Ds using Pearstone FreeWave Wireless Remote Shutter Release to trigger them all at once from 1 transmitter. He was doing still product shots where he set the cameras at various angles to the products and would get a bunch of angles at once with different length lenses so he could make it look like he did individual/varied setups for each product for his client. He said he had a working range of about 90 meters outside without the need for line of sight so cameras could be mounted behind sets, walls, etc.

Being in a building with old freight elevators and 70 yr old unshielded wiring he had to tinker with several frequency settings before he got the setup to work without interference but it seems to work well for him and he was adamant about not lending the kit to me anytime soon.

There are 3 ways that I can think of to achieve this.

The most reliable way would be to rig all of the cameras remote shutters together, and trigger them off. This should work in any condition, but it would require some kind of custom gear, which knowing Jay, probably isn't what he wants to do.

The IR solution proposed could work, but it would likely take a lot of work, and probably wouldn't work well outdoors.

The third way would be to connect all of the cameras to a computer, and use a USB control program. Of course, I don't know of many computers that have 10 USB ports, but I imagine that one could get a few hubs and probably get a manageable solution. You'll need some software, there appears to be a program called Cam2Com that'll do the trick. Up to 127 USB devices could be hooked up together, but you'll probably have to count mouses and such, but over 100 is possible. This requires a lot of USB cables, but it shouldn't be too bad.

Good luck, let us know how it turns out!

I'm not going to rehash a few ways of triggering multiple shutters:

But if it need be exact, disregard the shutter speed because the mechanics of the multiple cameras could easily be slightly different. You could treat it as a high speed photo gig and set up long shutters triggered by any of the above methods and light the subject entirely by flash. By doing this you're sure that all the pictures will have the exact same moment.

I could see something like this being used with 2 cameras to capture 3D waterdrops or such. I don't know your exact requirements because of the NDA, but its an idea.

A possible solution would be to physically wire the remote shutter switches each to a digital output of a controller. If you are unable to DIY, you will have to look for (third party) commercial solutions.

USB, IR or wireless can not give the precise control (< 50mSec) and calibration needed. A physical pair of wires to the remote shutter switch of each camera will enable precise adjustment ( to within 1mSec) of the relative timing. Each camera can be calibrated for shutter speeds, to give exact simultaneous triggering, or any adjustable triggering sequence. The controller is connected via a single USB cable and programmable from a PC.

As far as I know, commercial solutions exists which allow up to 40 outputs. 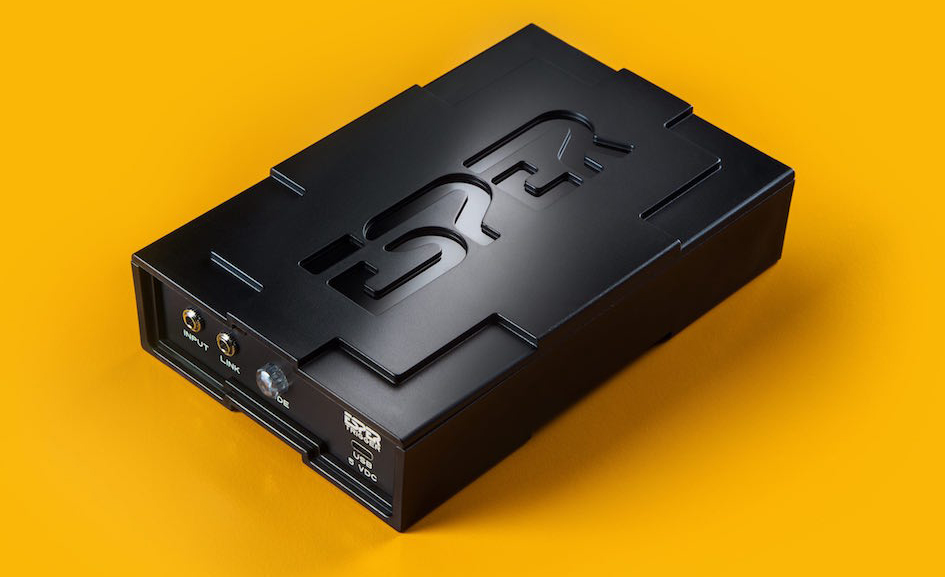 This is the product recommended by Chris Breeze and Eric Pare at Xangle - the Esper Triggerbox https://www.esperhq.com/product/triggerbox/

The ESPER TriggerBox is the world’s leading programmable multi-camera shutter release controller. It allows multiple camera to be fired simultaneously or with programmed sequences and offsets.

Up to 6 cameras can be connected to each TriggerBox. Multiple TriggerBoxes can be linked together to synchronise larger multiple camera setups. TriggerBoxes have been designed to neatly stack together.

Take a look at this video, they synced 3 cameras with 1/3 sec delay, but you can fire them all at once with the same type of setup.

CHDK http://chdk.wikia.com/wiki/CHDK and SDM (Stereo Data Maker, an off-shoot of the CHDK project) can sync all cameras with 1/10,000th second accuracy between them all, as many cameras as you want, using simple USB cables and a button switch. This of course is not useful info to anyone using DSLRs, but important to anyone wanting an inexpensive and dependable way to accomplish the same.

Not the answer you're looking for? Browse other questions tagged remote triggers or ask your own question.

1
Single remote trigger for fifty cameras
1
how can I capture images from two cameras simultaneously with a computer?
4
How can I syncronize simultaneous shots taken with two cameras?
1
How would I set up the ability to capture stills remotely from multiple angles/locations in a tiny house?

6
What are the pros and cons of a cheap 3rd-party wireless remote control for Canon 1Ds Mark II?
1
Any 8+ MP Nikon/Canon/Sony cam that can click photos via the PC?
5
How do I control the camera in Kite Photography?
2
What factors determine the size of focus step done with remote shooting?
1
Controlling multiple cameras
0
Syncing multiple cameras with multiple strobe lights
7
How do selfie sticks integrate with digital cameras?
0
how do I know if my camera can accept wireless remote shutter control?
3
Why won't my Commlite T320 triggers work as a shutter release for a second camera?